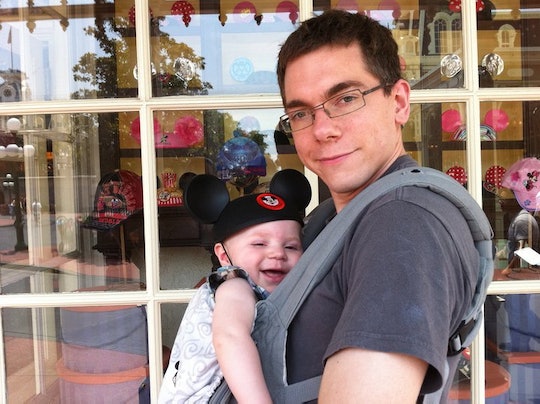 My Husband's Job Has Damaged Our Marriage & Our Family

When I gave birth to my first child five years ago, my partner only had one week of leave immediately after my son's birth and then went back to work full-time. With employers like Facebook and Netflix offering extended family leave for new parents, I can't help but feel envious. Actually, I feel more than envious; I feel like we were robbed of time together when we needed each other the most — when I needed him the most. We were supposed to be figuring out how to be a family now that we had a child together, but because of a lack of leave, I had to figure it out on my own. Before baby, he was my partner in everything. After our son arrived, that shifted.

Even though I mourn the loss of the the time I wish we'd spent together in those early days, I also, irrationally, blamed him when things got difficult. It put a strain on our relationship. We had more fights in that first year as parents than we've had in any other year before or since. As I bemoan the fact that my partner only got one week, I realize that even that week was a luxury, because the U.S. has some of the worst statistics when it comes to paid parental leave. So many parents have to go back to work right away to stay financially afloat and others have to go back to work just to keep their jobs, whether or not they'd take more unpaid leave. My situation was hardly dire. I had in-laws close by. My mother stayed with me for a couple of weeks. My baby was healthy and breastfeeding went well. But still, I look at that time and I realize that I was adjusting to being a parent while my partner was gone. He wasn't included in the vital and extensive changes that were taking place.

Up until my son's birth, my partner had been, well, my partner. In every sense of the word. And in every thing, too. But especially in how involved he was with my pregnancy. Every book I read, he read after me. He happily attended as many prenatal midwife appointments as he could. We attended childbirth preparation classes together. He was so involved. I was lucky. In facing the great unknown that is labor and birth and new parenthood, I wasn't alone. He remained by my side for the three long days that I was in labor. He only took naps when my mother insisted and offered to take over. In so many ways, I was relying on him even more than I ever had, and we were closer than we'd ever been.

When my partner wanted to be involved, he suddenly couldn't do anything right. He wouldn't put the tiny shirts over our son's head quickly enough. He picked the wrong socks from the drawer, the ones that never stayed on. He was putting him in the swing when I was sure my son wanted to be held.

The first few days postpartum were no different. He listened with rapt attention when we got our discharge instructions. Since I gave birth at a birth center, we were discharged just 12 hours after delivery, so we needed to a lot of vital stats recording. I was exhausted from being in labor for three days (and who wouldn't be?), so I was so relieved that he was there, taking notes, and soaking in the information I missed.

When our son was just 24-hours old, he wouldn't stop crying. I remember frantically trying to get him to latch onto the breast, even though the gestures and ritual of it all was still new and unfamiliar. I remember changing his diaper and checking for clothing that might be uncomfortable. I remember desperately handing him over to my partner for him to try to swaddle him: first with one of those easy zip-up swaddling sacks, and then with a blanket. I remember my partner recalling advice about loudly shushing while vigorously rocking the baby. We tried it all.

The only thing that worked was stripping him naked and putting him skin-to-skin on my chest, while rocking him vigorously and shushing in this one spot where the our lamp would come in and out of sight for our son. Finally he was soothed and he seemed interested in watching the light move back and forth. And then he pooped a giant amount of meconium in my hand. My partner and I laughed about this so hard. I can't remember ever laughing so hard about anything else. Through my exhausted hysteria, I was begging him to help me clean the sticky stuff up. We were both deliriously tired, but we were in this together.

But just when we were getting into the swing of things, my partner went back to work.

After that, we divided the labor as many new parents do: I was in charge of feeding the baby and soothing him to sleep. My partner handled the diaper changes, the cooking, and the many, many outfit changes newborns go through. (They seriously pee on everything. Or at least mine did.) But just when we were getting into the swing of things, my partner went back to work. I was nervous, of course, about parenting single-handedly. Especially when my mother went back home. But I coped. I figured out how to do it all. It wasn't easy, but I managed.

Suddenly we didn't feel like partners any more. I was tired from doing it all, and my partner was left out of bonding with his son. Worse still, I was the one who was preventing him from bonding.

I fell into a rhythm. I figured out how to read my son so that I began to know when he needed to be fed or when he just needed a snuggle. I hated to hear him cry, so if he was in the middle of getting dressed and got upset, I'd soothe him and then finish dressing him. I got way more efficient at everything and suddenly, I was convinced that the way I did things were the right way for my son.

It created a huge problem in my partnership. Because when my partner wanted to be involved, he suddenly couldn't do anything right. He wouldn't put the tiny shirts over our son's head quickly enough. He picked the wrong socks from the drawer, the ones that never stayed on. He was putting him in the swing when I was sure my son wanted to be held. Now that it's been five years, I look back and realize he wasn't doing anything wrong, he just wasn't doing things the way I had learned to do, yet I couldn't stop nitpicking him.

I didn't want to be critical of how he did every little thing. But I was in a fog of untreated postpartum anxiety. (And I didn't receive treatment for that debilitating disorder for months.) I couldn't stand to hear my son cry. And if my husband did anything that I thought was causing my son to be more upset, I'd swoop in and take over. I couldn't stop myself from telling him how to do every little thing.

Suddenly we didn't feel like partners any more. I was tired from doing it all, and my partner was left out of bonding with his son. Worse still, I was the one who was preventing him from bonding. Both of us were really devoted to each other and to our son, but that was definitely the hardest year of our relationship. We didn't see eye-to-eye on things. We had more fights, and they ended without any real resolution. A lot of that had to do with me and my own anxieties, but I don't think it would've been as much of an issue if my partner and I had fallen into that family rhythm together.

If we'd had that time together, maybe I would've been able to rely on him for support or for help. When baby was fussing, I could've asked my partner what he thought I should do instead of assuming I knew best. I could've asked him to help with the baby while I ran out for a break. We could've just played with our son and taken care of him as a team. We could have spent a lot less time arguing and a lot more time just enjoying those precious fleeting moments.

My partner really thrives when he gets attention from our kids, when they laugh and play with him. But it took years for him to get there with my son. And it wasn't from lack of desire or from trying; it was due to a lack of opportunity.

So now when I hear of Facebook giving four months of paid parental leave, I can't help the jealousy. Four months sounds so luxurious. By four months, babies are really settled into life on the outside of the womb. That really hard fourth trimester is over. By four months, I'd figured so much out. My son was sleeping for long stretches at that point. I wasn't nearly as exhausted. Having my partner home and on my team in troubleshooting early parenthood would have been amazing.

I think about how many more times we could have laughed about stupid things like being pooped on. I think about how much more rest I could have gotten. I wonder if it would have mitigated my anxiety or if I would have gotten help sooner. I wonder if, when my son got hurt, he'd be OK with being scooped up by his dad, instead of begging for me. I wonder if the father-son relationship would be as full of short-hand and jokes as my relationship with my son is. My partner really thrives when he gets attention from our kids, when they laugh and play with him. But it took years for him to get there with my son. And it wasn't from lack of desire or from trying; it was due to a lack of opportunity.

I've had another baby since then. And maybe it's because she's the second baby and I was more laid back, or maybe it's because she's an easier baby. Or maybe it was fact that I treated my anxiety with medication. Or maybe it's that my partner got a whole two weeks off this time. Regardless of why, I trusted my partner to take a larger share of the parenting duties with our daughter than with our son. And now I see how easily she's bonded to both of us. As happy as it makes me, I feel a twinge of sadness knowing that that could've happened with my son, too, if only my partner were able to be there more.

My son, who's 5 now, is only now just bonding with my partner as he's bonded to me. And not only has that been sad for my partner, but it's been exhausting for me. I've always been it for my son. He came to me for everything. It's has almost taken that entire five years for me to feel comfortable leaving him overnight, knowing that my son won't feel lost without me.

That first year would have been so much easier if my partner had had more leave. Our marriage wouldn't have been a source of stress. Parenting my son would have been easier. But it's that last piece, the fact that my son's and my partner's relationship took so long to take root, that makes me really sad and wonder what could have been. Unfortunately, I'm not sure I'll ever know.