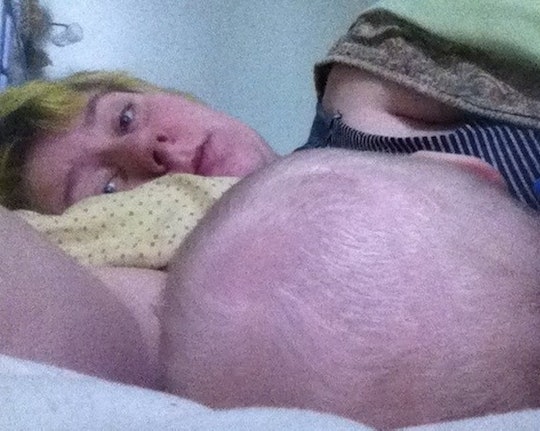 What Breastfeeding A 10 Month Old On Demand Is Really Like

My baby and I are about 10 months into our breastfeeding relationship right now, and though it hasn't always been perfect, it's mostly been really positive. What has helped me the most is paying attention to my child, and making feeding decisions based on his needs (and my own!) rather than the advice of experts. Though I love schedules, there isn’t really a breastfeeding schedule that works for me and my kid. And his nursing needs seem to change all the time, due to growth spurts, teething, separation anxiety, illness, all sorts of things. So for us, what made the most sense at first and (at least at this stage) continues to make the most sense, is breastfeeding on demand.

Different breastfeeding parents feel differently about the experience of breastfeeding, and that's absolutely OK. Some of us love breastfeeding, and others see it as just another chore. Though many moms, and other parents who give birth, either can’t or don't want to breastfeed at all, I wanted to breastfeed really badly, and I mostly like doing it, so I don’t mind that I’ve got a kid hanging off my boob most of the day. But that doesn’t mean it’s not a very particular experience, and that it isn’t sometimes very trying.

Breastfeeding on demand means that nursing can be extremely variable. I can’t really predict when my kid is going to need to breastfeed. So sometimes it might be every four hours or so, and other times it might be more like every hour on the hour. As a person who likes to plan ahead, this can sometimes throw a wrench in things. Can I count on a full-ish night of sleep tonight? I literally have no idea. Can I time my errands around breastfeeding so that I can avoid those weird looks we sometimes get for breastfeeding in public? Maybe, unless the baby has other plans. Being available to meet his needs is a wonderful feeling, but it certainly not very conducive to planning ahead.

Sometimes his feedings are ridiculously frequent. I said that he sometimes feeds as frequent as every hour, and that’s true, but that’s not the most intense it’s gotten. Last week, when he was teething like you wouldn’t believe, there were big stretches of the day where every half hour or so he would be grabbing at my shirt and asking to breastfeed. All of that nursing takes a lot out of me, pun fully intended.

And then, after we have a week where I feel like I never put my boobs away, suddenly he’s too busy doing other baby things to be bothered with a silly little thing like breastfeeding. He’ll be all about solid foods for awhile, and content to slurp on a sippy cup of water in between snacks. In some ways, I look forward to these times because it can be a much needed break. But it can also be a little bit confusing as his mom, not to mention increasing the possibility of engorgement.

It feels like, as his parent, I am supposed to have these kinds of answers about his schedule and his feedings and about what he needs to eat and when. I worry that because I just shrug and say “dunno” people will think I don’t know what I’m doing as a mom, either.

I start to wonder if I should be offering the breast more often, or even if he’s on the road to early weaning. He’s only 10 months old, but is he ready? I love that my kid is growing and becoming more independent, but it’s also painful to think that it won’t be long before he won’t need me anymore… at least in this one way. I try to bear in mind that the fluctuation is just part of his needs changing and evolving, but it isn’t always easy. Like, for example, when I’m sitting there leaking milk wondering when the heck this baby is going to fit me into his busy schedule.

I also find that I don't know how to answer questions about our breastfeeding. When he goes to the doctor for his regular check ups, they want to know how often he eats, which seems like a reasonable question, but in our case, it’s kind of a crap shoot. I used to answer based on whatever the last week, or even day, was like, and have had them respond with concern that “he’s still nursing like a newborn” when I answered “every two hours or so…” Nowadays, I tend to lead with “gosh, it’s soooo variable!” and then shoot for an average. And it isn’t only doctors. Occasionally my in-laws will babysit him, and they want to know how often they should offer him milk based on his recent schedule. I never have a good answer for this kind of stuff. And it feels like, as his parent, I am supposed to have these kinds of answers about his schedule and his feedings and about what he needs to eat and when. I worry that because I just shrug and say “dunno” people will think I don’t know what I’m doing as a mom, either.

The hardest part of nursing on demand is the rare occasion when I actually have to tell my son no. I love feeding my baby, but sometimes there are moments when I just can’t nurse right then. And every single time, it breaks my heart tell him he can't.

Also, surges in breastfeeding leave me feeling really, really, hungry. Before I had a baby, I could predict with some accuracy what my hunger and appetite levels might be like. Now that I’m breastfeeding a huge baby on demand? There’s no way in hell. Sometimes I don’t even notice that he’s nursing that much more often, until suddenly I’m so hungry I feel like a monster who just wants to eat everything in sight. There have been nights when I find myself on my third plate of dinner, saying, “I don’t know what’s wrong with me,” and my wife just stares at me and says, “well our kid is nursing constantly again; that might have something to do with it.”

But by far, the hardest part of nursing on demand is the rare occasion when I actually have to tell my son no. I love feeding my baby, but sometimes there are moments when I just can’t nurse right then. And every single time, it breaks my heart tell him he can't. It hurts both of us. I don’t care that I sound like a huge softy, but looking into those big, beautiful, heartbroken eyes and saying, “no, not right now sweetheart, mama can’t,” is the hardest thing in the freaking world. Maybe I know that the reasons make sense (we just nursed 10 minutes ago; we’re in a car right now; I have to pee first), but he’s just a baby and he can’t always understand those things. But, happily, we always come back together.

Breastfeeding on demand gives my child a sense of security and safety that he can’t get any other way. And it has advantages for me as well, believe it or not. Breastfeeding in this way means that I really never have to worry about whether or not he’s getting enough. He eats when he’s hungry, and he stops when he’s full, and I’ve been very lucky because my body has always managed to provide. Never having to figure out when — or how much — to feed him removes a huge potential stressor from parenting for me. Between that and the good it does him, it’s totally worth it for me to keep feeding him like this. I’m sure things will change in the future, but for right now, I’m going to keep doing exactly what I’m doing, and I know that my kid appreciates it.

More Like This
Is It Safe to Take Ibuprofen While Breastfeeding?
The Covid Vaccine For Kids Under 5 Has Been Sent To The FDA For Review
Mom's TikTok Sparks Debate On Whether It's "Normal" For Babysitters To Sleep On The Job
20 Perfectly Proper Tudor Baby Names