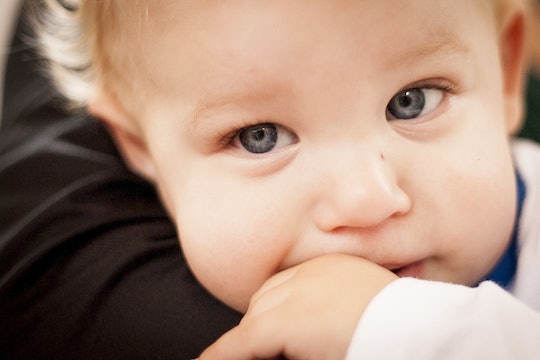 Why I'm So Scared To Wean My Baby Off Breastfeeding

This last spring, I gave birth to a beautiful, healthy, blonde-headed child. And then I made the choice to breastfeed him. I always knew I wanted to breastfeed any babies I might have, and despite looking forward to it, it has surprised me in pretty much every possible way. It has been more difficult, more challenging, and more rewarding than I could have ever imagined. It affects who I am as a mother (my son has two moms, and we like to joke that I am “boob mom” and she is “diaper mom”) and I believe it’s changed who I am as a person. Some days it can be incredibly trying. It’s hard to work, to leave the house, to have sex, or to do anything else that feels at all autonomous, when there is a tiny person who needs a part of your body to be more or less available to them at all times. There have been days when I have cried for the freedom that bottle-feeding mothers seem to enjoy.

My son hates, hates, bottles, and I hate pumping, so even though he’s had expressed breast milk on occasion, usually he’s getting it straight from the tap (that is to say, my boobs). And yet, despite all the ways that breastfeeding can be a hassle and an inconvenience, I know that when it's over I will miss it deeply. In fact, if I’m being perfectly honest, I’m downright terrified of weaning my baby off breastfeeding.

My son is 8 months old, which means that although total weaning isn’t right around the corner for us quite yet, his feeding regime is already beginning to change. He’s finally started (more or less) sleeping through the night. He enjoys solid foods several times a day now. As he grows and changes, as he learns to crawl and sets his sights on the goal of walking, I see him turning away from my breast. And that’s a really good thing. I believe firmly that we don’t have children for the sheer joy of having tiny babies and kids around, we have children for the honor of assisting them as they grow towards adulthood.

Every time my son gains even a tiny bit more independence, I am so proud of him, but that doesn’t make it easy. Sometimes it breaks my heart wide open. The idea of weaning is definitely one of those areas for me. I want to let me baby wean whenever he is ready to do so, but as our breastfeeding relationship changes over time, I’ve come to realize that it’s incredibly likely he’ll be ready far sooner than I am. It scares the crap out of me, and I’m trying to wrap my head around why that is.

It is difficult, and emotional, to imagine letting go of something that I fought and worked so damn hard for.

For me, breastfeeding feels like a hard won victory. Like so many other breastfeeding parents, I did not have an easy time getting started with it. Far from it being a simple and natural process (which is what I was imagining it would be, despite being warned that it could be really tricky), it was a skill that both me and my newborn baby had to develop together. Not only that, but as we tried to learn how to breastfeed, we were both exhausted from a week-long labor that ended in a c-section (so I was recovering from surgery and not actually feeling up to learning new things) and learning to navigate intense pressure from the hospital to start formula supplementation right away. I remember that during those first few days, I seriously sobbed almost every time I tried to feed him. But with the help and support of a small army of lactation consultants, and my incredible midwife, we finally got it down. And it is difficult, and emotional, to imagine letting go of something that I fought and worked so damn hard for.

When everything was terrible and I did not want to exist anymore and even breathing felt like an impossible chore, feeding my baby was the one thing that I had. I put my heart into it, and I’m so very glad that I did.

In those early weeks, I also suffered from some pretty severe postpartum depression. I’ve written about this before, but breastfeeding ended up being the thing that carried me through and allowed me to stay just “with it” enough to be able to reach out for help. Breastfeeding was my anchor. When everything was terrible and I did not want to exist anymore and even breathing felt like an impossible chore, feeding my baby was the one thing that I had. I put my heart into it, and I’m so very glad that I did. (And these days, I’m coping much better.)

Nursing is now one of the many awesome aspects of my life, which is great, but I’ve been warned that many breastfeeding parents experience a second depression around the time of weaning. Based on my experience with depression, I’m almost positive this will happen to me. In some ways, knowing is good, because my family can prepare, but of course I’m dreading that. I mean, who wouldn’t be?

When it comes down to it, I just love breastfeeding. I love it a lot. Am I allowed to say that? I don’t care, I’m saying it. I love breastfeeding. It makes me feel like a superhero, like I have this magical power wherein my body makes food for my kid, and that’s so great. Sometimes he stops nursing for a second just to smile and giggle at me, as if he’s trying to tell me how much he enjoys this special time that we share together. Those are the best moments.

Another thing is, growing up, I always imagined I would have a lot of children. As a matter of fact, I used to confidently assert that I would have exactly seven kids. These days, I’m 30 years old, and I have one baby, and it looks extremely likely that he’s going to be an only child. That’s OK, one baby is actually a pretty good number of babies, but I still sometimes struggle with knowing that I’ll never have the huge family I dreamed about. And that weird tension over family size definitely spills over into my feelings about my son growing up. I realize that him being my only baby means he’s both my first baby, and my last baby. So the last time he breastfeeds? That will be the last time I breastfeed, too. It’s a very particular experience, and it’s hard to even put words on what that feels like. Almost anything else that I do with my body, I get to decide if I want to try it again. With breastfeeding, I don’t have that kind of control, I would literally have to have another child to make that happen. With all of the good reasons not to have another kid, having a second baby just so I can get another shot at breastfeeding seems absurd.

I love feeding my baby. I also love that he is learning to feed himself, and that he is slowly but surely (but also too fast!) growing up and becoming an independent individual. I will let him wean whenever he decides it is time, regardless of my feelings about it. But that doesn’t mean that the prospect doesn’t feel me with existential dread and good old-fashioned fear. It does. But it’s just like I tell him, it’s OK to be scared and overwhelmed by changed, we just have to keep moving forward.