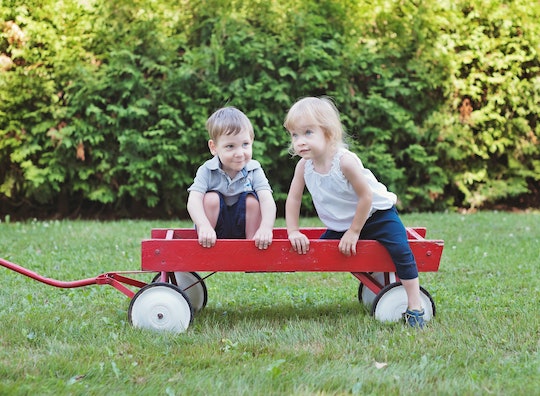 Why I Couldn't Have The Big Family I Always Wanted

Before I got pregnant for the first time, I was pretty certain I wanted to have lots of kids. It was long, long before my traumatic birth experience, but it was at that point it was dream, no less. I had one sibling growing up and we were never super close, and yet I knew people from big families and they seemed to be so tight, so loving, so awesome, and supportive of one another. A friend who was the youngest of eight (!) told me that she loved having so many siblings — they never had a lot of stuff because money was tight with so many kids, but they had fun and always looked out for one another. And I once met an elderly lady at a bus stop who’d had 11 kids (!!!), and she told me that even though they were constantly broke and exhausted, she and her husband would go to bed every night and say, “if only everyone could be as lucky as us.” I was pretty sure I didn’t want to have eight or 11 kids, but one or two just didn’t seem like enough.

When we finally did get around to babymaking, my husband and I got a little bit more than we’d bargained for: fraternal twins. And I learned quickly that when you have twins, people naturally seem to assume that you won’t even consider having more. Oh, you’re so lucky, they’d say. Now you never have to get pregnant again! You’ve got your whole family done in one go. And then I’d think, well, wait a second. Two babies may be a lot at once, but that doesn’t mean I don’t want to have more!

What I didn’t know at that point though was that, sometimes, it doesn’t matter what you want. Sometimes, it just isn’t up to you. At my 20-week ultrasound, we learned that there was a complication — my cervix wasn’t holding up the way it should and I’d almost definitely have the babies prematurely. Doctors swooped in and did everything they could to keep me pregnant as long as possible, but in the end, I only lasted another five weeks. Our twins Madeleine and Reid were born at 25 weeks gestation.

A few hours after the twins were born, once they’d been resuscitated and whisked away in incubators to the NICU where they’d fight for their lives, I turned to my husband said, “never again.” Never again would we endure what had turned out to be a complete and utter nightmare. A pregnancy that was rocky from day one only to end far too soon, not because our children weren’t healthy and happy hanging out inside my body, but because they were rudely evicted, forced out against their will because my cervix just couldn’t handle it. And despite all of everybody’s best efforts, our babies might not live because of it. Never again.

But they did live (thank goodness), and they came home and they grew and they started walking and talking and now they are running and telling jokes and having full conversations. And somewhere along the way, my original dream for a big family came back to me. I thought about what it would be like to have another infant in our family, a little sister or brother for Madeleine and Reid, and maybe another one after that. I thought about what it would be like for them to have each other, the four of them, and how one day, eventually, they’d all grow up and leave home and when they’d come back on holidays our dinner table would be full — of people, of stories, of energy, of love. Raising children is a lot of work — exhausting, thankless work — but no matter how tired I got, the vision of our one-day Thanksgiving table made me remember why we'd signed up for this in the first place. We were raising human beings who would one day be adults.

This time though, the family-planning conversation was different. It wasn’t like it was before the twins came, when one day I said, “I think maybe I should come off the pill,” and my husband said, “good idea!” Now it was, “I really want another baby, do you think we could handle maybe doing bed rest and the NICU all over again?”

My husband’s answer was no. Absolutely not. Maybe we’d be one of the couples who has preemies and then goes on to have perfectly healthy, full-term children, but maybe we wouldn’t. And he was right — there is no guarantee. But in my head, I thought of all the what-ifs: what if we only had one baby instead of two, wouldn’t that make a difference? What if I got a cerclage right away this time, instead of at 21 weeks? What if I took progesterone? What if I saw a high-risk OB right from the start instead of the midwife I’d gone to when we thought everything would be fine? What if, what if, what if.

We were at an impasse. He was ready to call it a day, to go straight for the vasectomy, do not pass go, do not collect $200. I still packed away all of the twins’ too-small clothes ... just in case. “Maybe we can go see a high-risk specialist together, just to get more information. Then, if they say it’s a bad idea, you can book your vasectomy." Matt placated me. OK, Alana. We’ll go see the specialist.

But we never saw the specialist. Instead, a friend of mine got pregnant — a fellow preemie mom who’d given birth at 24 weeks but who did not get as lucky as we did and lost her beautiful, perfect little boy eight weeks after he was born. She’d lost one child, but now was pregnant again, with her rainbow baby. We all held our breath and crossed every finger and toe in sight. We prayed to every deity in existence that this time would be different, that she’d have the amazing, easy, full-term pregnancy every woman should be able to have. But just like mine, her cervix failed. And unbelievably, terribly, horrifically, her second son passed away, a week after he was born.

I read the news on my phone in my kitchen, and collapsed almost instantly into a pool of heavy, sobbing tears. Crying for my friend, crying for her babies, crying for all of the people who knew exactly how she felt because they’d lost babies too. I cried on the floor until my head throbbed, until there was nothing left. And then I looked at my husband, who was also crushed, and said: never again.

“You have to listen to what I’m saying and take it seriously because I know that there will be times when I forget how I am feeling right now, and I’ll think that we should have a baby and that it’ll be worth the risk,” I told him. “It is not worth the risk. We should never try again. And if I try to tell you that we should, you need to remind me of exactly how I’m feeling right now.”

The next day, I started clearing out all the baby stuff I’d been holding on to. I gave away clothes, old toys, crib sheets, receiving blankets — anything I could find. I had to do it, had to get rid of everything we’d kept thinking we might use it again eventually, because that stuff represented what I really needed to let go of: the dream for a big family. The kids and the chaos and the exhaustion and the love. The crowded Thanksgiving dinner table. I thought it was up to me, but it turns out that it wasn’t at all. It was up to my body, and my body was saying no way.

Some days, I still dream about what it would be like to get pregnant again and have it be everything I want it to be. Some days I think about how wonderful it would be to have another little baby now that the twins have left that stage behind. Some days I think that it's still technically entirely possible that we could have a healthy, full-term pregnancy, because lots of people go on to have healthy, full-term pregnancies after premature births. But then I look at my children, my beautiful, thriving, healthy children who beat all of the odds, and I know it’s not worth the risk.

So I guess, in a way, everyone who’d assumed our twin pregnancy would be our last was right. We had our family in one shot, just like they said, and it’s enough. It will have to be enough.