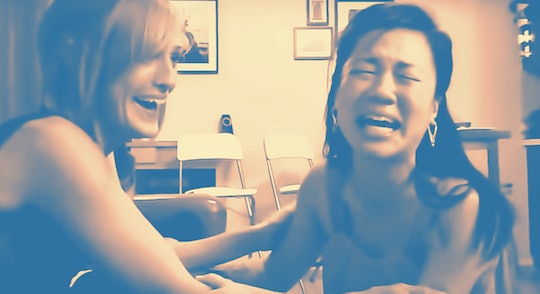 I Can't Stop Watching Pregnancy Announcement Videos — Is All This Crying Bad For Me?

I was in a puddle of tears in front of my computer screen by the time my husband got home from work. "It was just so sweet! The grandma almost had a heart attack when she opened a present and blue balloons smacked her in the face!" I hiccuped through jagged breaths, mid-nose blow. My husband stared at me. At once frightened and confused, his face was the definition of “What the hell is going on?” He had every right to ask. His normally snarky wife was suddenly a weepy mess and all because of a … pregnancy announcement video?

When I found out I was pregnant with my son, I was just a few weeks out from a trip home to Washington state to visit my parents. Knowing this might be the only visit I’d have before I started to show, I began to panic about whether to tell them the big news so early in my pregnancy. I’d only be six weeks along by the time I touched down at SeaTac, hardly the cautious 12 weeks typically suggested for announcing. Then again, I live 3,000 miles away. A Skype call just wasn’t gonna cut it. And besides, this was my parents. Not a bunch of randoms on Twitter. Surely, I could tell them early; if anything went awry, I’d want them to know. But my announcement couldn’t just a be an “Oh hey folks, I gotta bun in the oven” situation. No no. My parents are heavily involved in their local theater company, which is to say, they see every special occasion as an invitation to amp up the drama.

Exhibit A: When my parents celebrated their 20th wedding anniversary, my Dad surprised my mom with a diamond ring hidden in her dirty martini.

B: When my folks realized my senior year of college might be our last opportunity for a family vacation together, over Christmas they gave me and my sister tiny alphabet beads and had us spell out our destination — a surprise trip to Rome.

C: When they hosted an engagement party for me and my husband, it wasn’t enough to serve canapes and cocktails — they surprised us with a serenaded performance.

In the best sense of the word, they’re “extra.” And, like it or not, I’m no different. If I was going to surprise them with the pregnancy news, I’d have to think of something more exciting. So, naturally, I began to watch videos of surprise announcements. Lots of videos of surprise announcements. You can find compilation after compilation of them on YouTube.

Part voyeurism, part brainstorm, I told myself this was research. Surely inspiration would strike if I just watched this one clip of a pair of grandparents sitting in their messy living room bursting into tears when their daughter handed them her pregnancy test; or this one with a toddler shouting “I’m going to be a big brother!” to a family’s collective glee; or perhaps lightning would strike if I replayed the video of two sisters finding out in the ultimate serendipitous moment that, OMG, they’re both pregnant!

Peeking in on the lives of strangers exposing their most private moments was like catnip to my estrogen-, progesterone-, and human chorionic gonadotropin-soaked heart.

But what started as a silly distraction quickly turned into a sob-laden fixation. Gutted by the emotional enormity of these announcements, I began to think that surely I wasn’t the first expectant millennial mother to become fascinated by the whole pregnancy reveal?

A look at the numbers suggests I am not. Search Google for “pregnancy announcement video” and you’ll get 34,700,000 results. Clearly someone else watches these clips. But self-induced crying jags disguised as a fact-finding mission? Well, looking back, I have to wonder, was this hobby was cathartic or creepy?

“I think if you’re the type of person who likes to have a dramatic flair and it is fun and exciting and gives you positive energy, then that’s OK,” says Dr. Constance Guille, M.D., associate professor of psychiatry and behavioral Sciences and director of the Women’s Reproductive Health Program at the Medical University of South Carolina. “But it’s another thing if it preoccupies your thoughts and makes you anxious, then that doesn’t sound so positive.”

Here I was, just days into incubating my child, and already the pressures of motherhood were affecting me.

What it comes down to, Dr. Guille’s says, is whether this kind of behavior triggers anxiety.

“One in seven women will experience depression during pregnancy. For low-income populations, it’s one in three,” she says. “Depression is the most common complication in pregnancy. So you need to be aware at what shifts your mood.”

Welp, she got me there. Clearly the video sesh’s shifted my mood. And that was before the thoughts I indulged about planning, filming, and potentially sharing my own familial reveal. Then came the big red flag: Not surprisingly, Dr. Guille says, the pressures of social media compounds these factors.

“Forever, we have always had a lot of judgement around women who are pregnant and mothers,” explains Dr. Guille. “Media has always distorted that, promoting that this is the most wonderful time of your life. Social media puts all of that on steroids and makes it so much worse.”

Here I was, just days into incubating my child, and already the pressures of motherhood were affecting me. And while simply viewing cute videos seemed harmless, in hindsight I can see that the activity had the potential for all kinds of bad results: negative self-talk, low self-esteem, and the impulse to compare myself to other moms-to-be.

“If you can use social media as a social support, connecting with people in a meaningful way, great. But if the majority of it is comparing yourself to others, you need to ask yourself, is this helpful?” says Dr. Guille.

It is, she adds, all part of the essential self-care newly pregnant women should take like getting good sleep, eating well, drinking water, taking regular exercise, and connecting with people in a supportive way. “All of those things set a good foundation to be resilient toward stressors,” she says. “That’s the baseline.”

What Dr. Guille might have told me had she seen me deep in my throes of video obsession: Take a step back. Turn off the social media channels for a bit and see if your perspective changes.

“It’s rare you come across something on social media that is authentic and consistent to being pregnant and a mom. Sometimes it makes people feel worse and adds another layer of judgement that you’re not doing this perfectly,” she says.

And during that delicate, hormone-saturated first trimester, who needs negative reinforcement?

Fortunately, I figured that out before I went off the deep end and down the YouTube rabbit-hole. I turned off the computer and got on the plane.

When I arrived at dinner with my mom, dad, and sister, after landing in Washington, the pregnancy reveal solution became clear. Without a video device (or elaborate tap number) in sight, the waiter asked for my drink order. And for my eyes alone I got to enjoy my family’s bliss-bomb of a reaction when I calmly replied, “I’d really love a champagne cocktail … in about nine months.”