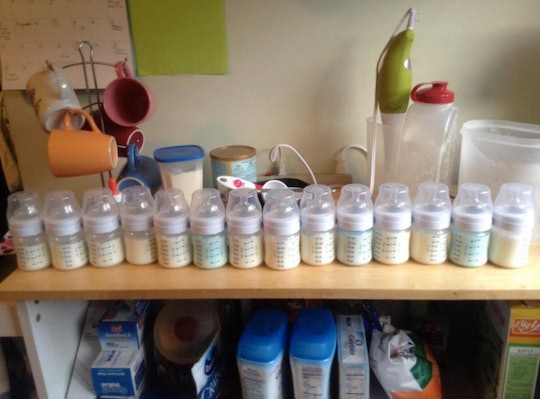 I Chose To Bottle Feed My Sons & I Don't Regret It

Even before I became a mom, I knew breastfeeding wasn’t something I was really interested in doing. Although I fully support women who breastfeed and I’ve helped my own friends get their babies latched on, breastfeeding wasn’t something I felt compelled to experience with my own kids. As the oldest child in a family full of cousins, we were #teamformula all the way, so I felt comfortable following in the same footsteps as my mom and aunts. I have fond memories of feeding my younger cousins, and I wanted my family to be able to experience that with my own kids without having to worry about pumping to make it happen. Although I was curious about the claims that breastfeeding helped you lose baby weight, and the idea of saving money by not buying formula sounded great, I still didn’t like the idea of being solely responsible for making sure my baby ate enough.

When I got pregnant with twins, my feelings towards breastfeeding went from ambivalence to a full-blown nope. I know there are women who manage to breastfeed multiples, but I am not one of them. My partner is a college professor and couldn’t take time off when the babies arrived, and we don’t live near family, so I would be alone with two newborns for most of the day. Knowing I wouldn’t have someone to help me settle both babies for dual feeding meant I would likely have to feed each baby individually, and math quickly told me that would be nearly impossible. If a newborn eats on average eight-12 times a day, and I had two of them, that would mean I would literally be feeding them around the clock. Add in pumping time so I could try to create a stockpile in case I ever needed to be away from them and I’d barely have time leftover to eat or shower.

Choosing whether or not you’re going to breastfeed is an extremely personal choice that every parent has to make on their own, and respecting every woman's freedom to make that decision for herself is incredibly important. For me, bottle feeding was the better choice. When it came to middle-of-the night feedings, the idea of warming up a couple bottles with my husband and feeling like we were in this parenting thing together was much more appealing than stripping down and feeding the babies all by myself.

Leading up to my delivery, I told my obstetrician and nurses of my plans to formula feed, and no one batted an eye. They said they understood my concerns about logistics and time. With so much stress over how I was going to care for twins, it was a huge relief to have one less thing to worry about. I didn’t register for a pump or nursing covers. I wasn’t concerned with clearing out a space for breast milk in the freezer. I was perfectly happy having no idea what a nipple shield was for.

But then my twins were born prematurely at 33 weeks, and suddenly it was as if the doctors were Voldemort and my breasts were filled with the Elixir of Life. One of the very first things the doctors said to me when I saw my babies for the first time after their birth was that the colostrum my breasts would soon produce would be very helpful for the babies’ fragile immune systems. It was less of a suggestion and more of a plea, and I couldn’t say no. When you have babies so sick you can’t even hold them when you want to, you’ll do anything to help them. I would have happily given them all my organs if that’s what the doctors said they needed, so I threw all my previous plans out the window and started pumping mere hours after my c-section.

I kept up with pumping and breastfeeding the one twin who was strong enough until the boys were both home from the NICU. It was exactly 13 days, and I hated every single second of it. Breastfeeding was easier for me than it is for many women — I had no issues with supply, my son had no difficulties latching, and with the exception of one blocked duct, I avoided complications. Still, although it felt good to be doing something useful while my babies were in the hospital, I never got over feeling like a dairy cow rather than a person. I was constantly tired and thirsty and felt like everything I owned was being splattered with breast milk. It’s been nearly three years and my mouth still goes dry and I start to feel panicked if I hear someone’s phone go off with the same ringtone I used as my time-to-pump alarm.

But rather than be honest about my decision to put my boobs back in my blouse and keep them there, when people asked why I wasn’t breastfeeding, I told them a half-truth.The doctors had said the boys could benefit from being on a formula designed to help them gain weight, and I grasped onto that news like Rose clung to that door in Titanic. I used their need to gain weight as a reason to validate my decision to formula feed, when really there was no reason for me to be ashamed of my choice. By allowing myself to feel ashamed and fib about my decision, I only made it more difficult for other women to be honest about their choices.

I know there are studies saying breast is best, but not all scientists agree on that point. Besides, if a mom’s mental outlook is significantly compromised by feeling forced to breastfeed or pump, that can have its own negative impacts on the baby. My kids are 2-and-half years old now, and are either on-target or ahead of all of their milestones despite being born seven weeks early and having a formula diet, so it’s impossible for me to be feel like I impaired their development by feeding them formula. Everyone has to make the decision for themselves, and for me, feeling like my children were a blessing and not a burden on my breasts was the right choice.