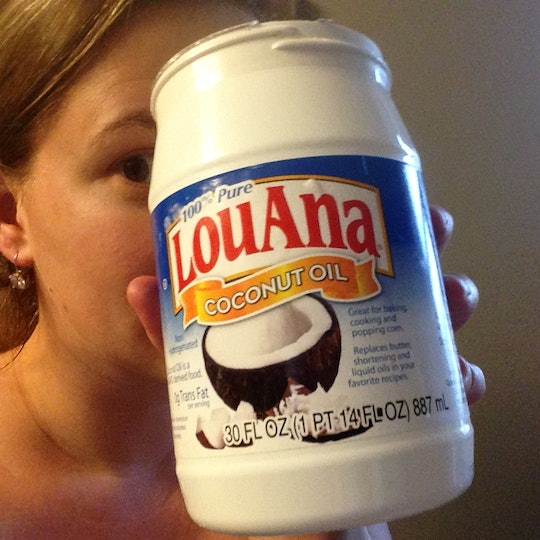 I Cooked Every Meal Using Coconut Oil & Here's What Happened

I know this impossibly hard to imagine now because we live in an age where it's the magical cure-all for everything (and when cooking with coconut oil is all the rage), but there was once a time when using the trendy oil was considered evil and a horrible-for-you food meant to be avoided at all costs. I know, I know. I didn't believe it first either. My, how times have changed!

Today, coconut oil can't be beat, and its uses and health benefits are both versatile and long-standing. I, myself, fell down the coconut oil rabbit hole and ended up swapping my shaving cream for coconut oil and surprisingly? I actually preferred the tropical fruit oil instead of my go-to Gillette. I even used an essential oil to whip up my own coconut oil lotion. Among the many, many benefits, coconut oil is great for skin health and hair care, it's known to help prevent heart diseases and helps strengthen the body's immunity toward diseases, and it helps to improve digestive health, according to OrganicFacts.com. With such a litany of accolades, I wondered whether cooking with coconut oil would be a way to soak up the benefits even faster.

After I got a little more comfortable with coconut oil, and especially after trying the Paleo diet, I decided to go all-in with my coconut oil use. Goodbye butter and Rachael Ray's famous "EVOO." I'd recently read that olive oil might cause cancer and it freaked me the heck out, so this experiment came at the perfect time.

Science basically says that coconut oil can withstand higher temperatures than olive oil when you cook with it (which means it retains its beneficial fats, whereas olive oil does not) so I went for it and decided to see what would happen when I cooked with coconut oil and coconut oil only.

I realize this isn't cooking, but I couldn't get through a cooking-with-coconut-oil-only experiment without incorporating it into the most crucial part of my day, which is, of course, coffee.

I whipped up a version of bulletproof coffee using my kitchen blender and used a tablespoon of coconut oil. I felt pretty darn healthy. I honestly didn't love the taste of coconut oil in my coffee, even though it looked pretty (I finished it off with a dash of cinnamon, which I'm completely obsessed with and totally advise you to try if you haven't already). The coconut oil transformed my boring old cup of coffee into something frothy, like a latte, but after a few minutes it kind of deteriorated and it was like I could literally taste the greasy coconut oil stringing through my coffee. Delicious, I know.

I thought I could become a bulletproof coffee convert, especially if it lived up to its claims of helping me lose weight, giving me more energy, curing my cold, but then I looked at the coconut label and saw that one tablespoon — one measly tablespoon — had 120 calories in it and I was flabbergasted. I was so focused on how "healthy" coconut oil is for you that I never even thought about the calories. I know that calorie-counting isn't the basis for how I should judge a food's nutritional worth, but I won't deny that I was totally surprised by the additional calories for something that I didn't really find absolutely delicious.

Day two was all about the waffles. After some disastrous attempts trying to make edible waffles to eat on the Paleo diet, I was about to throw in my waffle iron for good before giving it one last good try.

I was hosting brunch for my in-laws and my little nephew has severe dairy and soy allergies so I decided this was a perfect opportunity to try a new waffle recipe using coconut oil instead of butter. Every week, I make a delicious overnight waffle recipe that involves copious amounts of butter and milk, so I decided to see what would happen if I swapped out the butter for coconut oil and the milk for almond milk. What's the worst that could happen, right?

And actually, they turned out pretty well. They were a little lighter looking than when they normally come out made with butter and milk, but they tasted so much better than the almond flour, dense Paleo waffles I'd tried before. The only problem with these waffles that I labored so long over was that I sprayed my waffle iron with coconut oil spray, thinking I was so clever to have found such an item, only to happen to glance at the spray's label as the waffle cooked up deliciously and saw the ingredient label contained a giant, bolded warning sign: INGREDIENTS: COCONUT, SOY.

So yeah, my nephew couldn't even eat the darn waffles after all. Curse you, soy.

Today can be summed up quite easily actually:

There is no substitute for butter in traditional chocolate chip cookies. I tried it and can confirm that it just isn't the same.

On the weeknights that I plan to go to the gym (a little luxury I try to fit in one or two nights a week), I try to get a Crock-Pot meal going to make our evenings flow a little more smoothly. My husband is actually an incredible cook and cooks dinner for us almost every night, but it's always nice to have dinner ready to go on its own, especially on nights when my gym visit can stretch well past an hour after with the commute home.

I made one of my tried-and-true Crock-Pot recipes on day four with an orange chicken recipe. It's one of the few meals that all of my children will eat and it's not totally completely horrible for you, which is a plus. You just mix a couple of cups of fresh orange juice with a tablespoon of balsamic vinegar, some garlic powder, pepper, and a few squeezes of ketchup and pour over chunked chicken and cook on low for four hours.

My kids prefer the chicken breaded, so I coat the chicken in flour and fry it in a pan before I transfer to the Crock-Pot to let the magic happen. Normally, I use olive oil for the frying, but for the sake of this experiment, I used coconut oil this time. I found that the first batch cooked really well and cooked much more evenly and was more of a golden brown color, but the second batch was not so great. The oil really stuck to the pan with the leftover flour and burned into something horrible and all of the chicken pieces literally turned black.

However, dinner was delicious and my kids didn't seem to notice the difference, so we'll call this one a win.

Because using coconut oil makes me so feel fancy healthy, and also because I had a leftover head of cauliflower that I never got around to cooking, I decided to roast some cauliflower for soup that I was going to make for me and my husband. The most annoying thing to me about cooking with coconut oil is the fact that in order to use it, you have to melt it first. Maybe that shouldn't matter, but I'm lazy and it does matter to me. I just can't seem to take the extra 10 seconds to get out a measuring cup, put the oil in a microwave-safe dish, melt it, and then use it. But for the purposes of finding out just how versatile coconut oil is, I went that extra mile to melt some oil and even asked my 3 year old to help me brush it over the veggies for roasting.

Unfortunately, when I preheated the oven I discovered my husband had taken it upon himself to clean our oven (it only took eight years and an unfortunate bacon grease fire to get us there!). Admittedly, it was incredible of him to do so, but he'd used some kind of NASA-approved chemical cleaner and as a result, when I preheated the oven and opened it, toxic fumes (or what I thought were toxic fumes) came spilling out. I called him in a panic, sent my kids upstairs, and opened every window and door in our home to air it out.

It took me all day, but I finally reduced the fumes from "Red Alert Emergency" to "Slight But Still Manageable Nasal Burning" and braved the kitchen again. (The fumes were just that: fumes.) I was too afraid to use the oven, however, and instead sautéed and half-steamed my cauliflower. It was still a success.

The single best use of coconut oil I found on day six came from sautéing vegetables with it. It worked perfectly and even though I tend to use a little more oil than is necessary just because I'm scared of burning something, I actually think I prefer my vegetables with coconut oil. The taste is lighter and not as heavy as I find olive oil to be.

My husband, in an effort to help me eat healthier, whipped up some homemade sausage from some ground pork and spices (turns out fennel is the key ingredient in breakfast sausage, who knew?). Aside from giving me plenty of dirty joke fodder for the next few weeks, the homemade sausage also gave me another chance to put my meat-frying coconut-oil skills to the test.

Just like the chicken, I had a lot of trouble with burning. Maybe I'm just so used to cooking with olive oil and the heat regulations are different, but I just literally burn everything I cook in coconut oil. It seems to disappear too quickly where I need it and stockpile in other places of the pan where I don't need it. Then it burns and everything is ruined. I tried cooking these sausage patties and some homemade meatballs in coconut oil just to see if it would make a difference and I ruined them both times, so I ended up baking things instead, which hey, maybe was healthier anyways and that's why coconut oil saves lives?

Honestly, I'm not convinced that coconut oil is the miracle ingredient it's cracked out to be. I admit that I'm a fan of using it for shaving cream and I still plan on sautéing my vegetables in it, because I liked it better, but I'm definitely not going to try cook meat with it anymore. Maybe it's just me, or maybe it's a combination of me, our pans, and our electric stove, but something in that trio is not meshing well and after a few tries, I'm OK with throwing in the towel.

But to be totally honest, I think I'm just a little sick of coconut oil. I know some people swear by it and I even have a cousin who uses it for mouthwash, which I still don't completely understand, but I think after this experiment I'll be taking my coconut oil in limited doses from here on out. And in the event that olive oil really is causing cancer, I went out and stocked up on some grape seed oil, which, unlike coconut oil, I do not have to melt prior to using. You know, just in case.