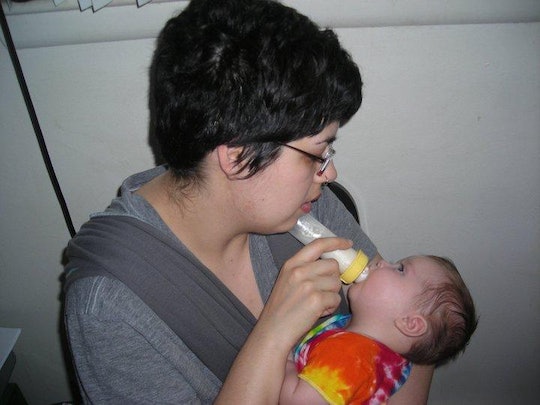 Courtesy of B R Sanders

When push came to shove, and it became clear that formula was a true necessity for my kid, I couldn’t shake the feeling that something was deeply wrong with me. I couldn't breastfeed my baby and I felt like I should stitch a bright red “F” on all of my clothing so everyone would know what a failure I was.

Here’s what happened: Arthur came a little early, right on the fence between full-term and preemie. They call it "late pre-term." He was a tiny thing, just shy of 6 pounds, squish-faced and squalling. The nurse showed me how to get him to latch, and I thought we were set. Since late pre-term babies sometimes struggle with breastfeeding — because late pre-term babies have difficulty latching, and have a more difficult time breastfeeding due to lower muscle tone, and tire more easily, according to Marianne Neifert's website, Dr. Mom — they held us an extra day at the hospital and gave us additional breastfeeding support (along with approximately a thousand Breast Is Best pamphlets). The lactation nurses also thought we were set.

Everything seemed to be going great. Arthur latched well and breastfed for half an hour or so at a time. But when I took him to the pediatrician a few days later, everything fell apart. He’d lost weight. He was severely dehydrated. Apparently, he’d been latching and just drifting off to sleep, cozy and warm and soothed by the skin-to-skin contact. But he wasn’t receiving any actual nutrition. I was mistaking the flood of gooey oxytocin hormones for milk let down, but my milk hadn’t actually come in. I cracked. I don’t cry often, but I cried a lot in that appointment.

I went to see a pair of lactation specialists. There were more tears. Arthur’s latch was good, but that didn’t matter much if there was nothing to drink. When your milk doesn’t come in, as happens in perhaps 5 percent of cases, according to a report from Pediatric Clinics of North America, which may be a low figure due to underreporting, this is called "primary lactation failure." As in, your breasts are the primary source of milk, and they have failed.

The lactation specialists gave me some next steps to try: a prescription for a monster of a breast pump, and some fenugreek pills. The pills had me smelling like a Waffle House. The new pump was a free-standing thing that attached to both breasts at once. It was loud, and it hurt, and I hated it. I breastfed Arthur six times a day, and pumped eight times a day. I pumped sequestered in the bedroom, while trying to work on my dissertation and/or fighting back tears. The amount of milk my body produced was pitiful. Arthur went on formula to keep him hydrated and healthy.

I’d loved the feel of breastfeeding, even if it wasn’t actually feeding him. I’d loved the intimacy of it. And I couldn’t shake the immense feelings of failure that came with giving up.

I went to my OB-GYN to see if there was a reason why my milk refused to come in. We checked my breasts for clogged ducts. They weren't. We did ultrasounds to make sure there were no errant bits of placenta still hanging out in my uterus. If your placenta decides to hang around, it may imbalance your hormones and prevent the rise in prolactin needed to trigger breast milk production. We never found anything that explained the lack of milk production. My OB sighed and said it just doesn’t happen for some people, and no one really knows why. Arthur’s latch stayed good, but over the next month, the already-paltry amount of breast milk my body produced dropped. Even with all the help, and the medical-grade equipment, and the supplements that made me smell like maple syrup, I somehow got worse at breastfeeding.

I lasted two months before I gave up for good.

It was heartbreaking for me. I’d loved the feel of breastfeeding, even if it wasn’t actually feeding him. I’d loved the intimacy of it. And I couldn’t shake the immense feelings of failure that came with giving up. There were so many “shoulds” that kept forcing their way into my mind — you should keep trying, you should add in another pumping session, you should do this for him because you read all those pamphlets, you shouldn’t give up because of your own comfort. But the truth was, I wasn’t sleeping anymore. Even looking at that stupid pump made me burst into tears. I was miserable, and my body ached, and everything around me felt wrong. The truth was that I was only half aware of anything at any given moment because I was so fatigued and so overwhelmed and so buried in self-doubt and shame and self-imposed guilt about this thing my body, for medically mysterious reasons, so steadfastly refused to do.

If I didn’t see him suffering then, what kinds of suffering would I miss in his future? I still worry about that.

When Arthur transitioned fully to formula, he gained back all the weight he lost, and then some. He grew fast, like a little sprout. I started sleeping again. I finally started enjoying being a parent. Now he’s a healthy, brilliant 5 year old. He’s in kindergarten, writing entire words! I still get weird twinges of shadowy guilt about having not been able to breastfeed now and again. What went wrong with my body? I’ll never know.

Arthur is fine, and I am mostly fine. The experience left me with strange psychological scars. How could I have been doing so badly at something so important without realizing it? My baby was dehydrating in front of me and I hadn’t even seen it. With parenting, we're learning as we go, and every second is momentous and important and uncharted. We have to trust our judgment, and so often our judgment is just fine. But sometimes — either because of false assumptions or inexperience — it isn’t. And our kids suffer. And we don’t even realize it. If I didn’t see him suffering then, what kinds of suffering would I miss in his future? I still worry about that.

The thing with parenting is that it simultaneously gets easier and harder. You learn about kids in general as you go, and you learn about your kid. What they need and what they want, what you need and what you want for them. But every time you think you have it all nailed down, they change on you. They go through another seismic developmental shift, and they are, at once, the same kid and utterly new. They keep you on your toes. They are learning and growing, and you, as a parent, are learning and growing along with them. Which means you might miss something. You’re going to miss something. And it’s going to be horrible. But it will be ok. You’ll both be OK. We were.