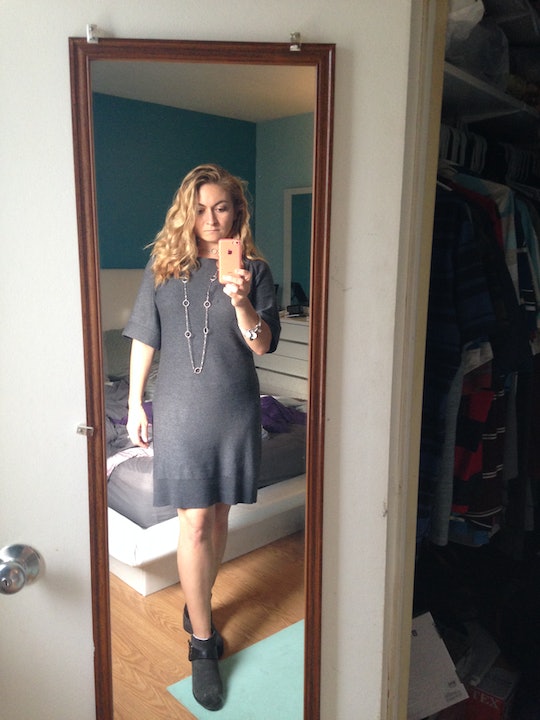 When I was pregnant, I tried to follow all the advice I could find in order to minimize the changes carrying twins would have on my body. I managed to avoid stretch marks, but my pelvic muscles are another story. I followed the chapter in my baby book on practicing Kegel exercises while pregnant — squeezing my internal muscles as though I was trying to stop the flow of urine — in order to keep myself the muscles of my pelvic floor tight.

But when I proudly announced to my OB during a check-up that I was religiously doing my Kegels, rather than applaud my initiative, he laughed. "Go ahead and do Kegels all you want, you're still going to end up peeing yourself," he told me, with far too much glee than I thought was strictly necessary. I continued to do Kegels anyway, but my OB was right: all the squeezing in the world couldn't counteract the pressure of having two babies sitting on my bladder.

I'd hoped that once my kids were born my pelvic floor would bounce back, but sadly it has not. As embarrassing as it is to admit, I constantly feel like I need to use the bathroom, even if I've just gone. And laughing, jumping, or sneezing with a full bladder usually requires a change of underwear. I'm sick of being dehydrated because I'm too lazy to use the bathroom four times an hour, so I decided to give Kegels another shot, mainly to see if they could improve the quality of my pelvic floor muscles after having twins.

In hopes that it was possible to sneeze without being scared, I decided to try Kegel exercises every day for a month to see if it made a difference. Although there are devices that act like barbell weights to help your pelvic muscles get supper ripped, as a novice I decided to stick with using my own body weight as resistance.

I set a goal of doing 100 one-second pelvic squeezes per day, along with 10 seconds of squeezing and releasing as fast as I could, and then five progressive squeezes where you contract your muscles tighter and then release a bit at a time, like riding up and down an elevator.

Week One: I'm A Kegel Ninja

I loved the fact that this was an exercise I could do anytime and anywhere. I did my Kegels while drinking coffee, making dinner, brushing my teeth, even while standing in line at the grocery store. As long as nothing interrupted the counting in my head, Kegels really could be done anywhere and without any special workout clothes or equipment.

I realized that as much as I try to carve out me time for things like coffee with my friends or the occasional bubble bath, there's always a sense of guilt for not spending that time with my kids. But I can do Kegels while reading to them or stacking blocks, so it's nice to have something I can do that's 100 percent for me without any of my typical guilt.

I was super proud of the fact that I managed to do every single Kegel I'd planned to do this week. Even though I don't feel any like anything down there is different, the sense of accomplishment I felt from getting through this first week so easily was enough to keep me motivated for the rest of the month. That, and watching YouTube videos of women lifting insane amounts of weight with their own lady bits.

Week Two: Any Muscle Can Get Sore

I underestimated how doing all these Kegels would impact my muscles by working them day after day without a break. In the first week, the hardest thing about my Kegel routine was trying not to lose place in counting my repetitions, but now that I'd been doing them consistently, my body was getting tired halfway through. I really had to fight to make it through all 100 squeezes and some days, I had to do the rest of my exercise later in the day or not at all.

That said, I did notice I didn't feel the urge to run back to the bathroom the instant I was done washing my hands, so my new regime did seem to be having a positive effect so far. Usually I feel like the urge to pee every minute of the day, but when I did go to the bathroom during week two, I realized I didn't have to go as much. I noted that the urge to go was coming from my weak muscles because they made me feel like my bladder is full.

But after two weeks of Kegels, I felt less of these false alarms and was beginning to only feel the need to go to the bathroom when I actually did have something in the tank, so to speak.

Week Three: Let Me Take You On A Sexcapade

The thing that's not fun about working on improving the muscles of your pelvic floor is that you can't really brag about your accomplishments to anyone. If I were learning how to knit or doing a lot of pushups, I could share my progress on social media or ask my friends to squeeze my bicep, but tweeting about not peeing myself hardly seemed like the kind of thing that was going to earn me any compliments.

When I told my friends about my experiment, a few of them mentioned that they utilize Kegels during sex to increase both participants' pleasure. Eager to finally show off my strong new pelvic muscles, I decided to give it a try.

To put it mildly: It was a disaster. In an effort to add some sizzle to my marriage, I decided to surprise my husband with my new Kegel-squeezing skills. But I was so focused on trying to do the Kegels that I wasn't enjoying myself, and he could tell. He paused mid-act to ask me why I looked like I was concentrating on something, and I confessed to what I was trying to do. When he told me he hadn't noticed even the slightest change, I was mad and frustrated. Were these Kegels not making a bit of difference? Did this mean I was bad in bed?

He convinced me that neither was the case and we decided to resume where we left off, but now both of us were fully aware I was attempting to do Kegels and we were both distracted my it. The "chill" part of the evening having crashed and burned, so we queued up Netflix instead.

Oh, and I vowed never to try Kegels during sex again.

Week Four: Victory Is (Sort Of) Mine

This week I had a breakthrough: I did jumping jacks and an entire 30 minutes of squats and lunges without having any leaks or feeling uncomfortable down South. Sure, when one of my kids took a flying leap onto my bladder before I had gotten out of bed in the morning I had to immediately hop into the shower, but being able to drink water throughout the day and workout without worrying was a huge step in the right direction.

In general I tend to work out at home in case my bladder betrays me, and if I do go to the gym I wear dark colors and stick towards the back of whatever class I'm taking. But this week my newfound confidence in being able to not leak during a workout had me feeling like maybe I could go to a fitness class and actually enjoy myself. So I put on my darkest-colored leggings and gave it a try.

I"m no stranger to lifting weights and I've seen my body gain strength and muscle mass through consistent weight training, so it was really only logical that doing Kegels consistently would have a positive effect on my vaginal muscles. Even so, I was surprised by the success. I made it through a class without needing to run out in shame, and it felt amazing to do something that made me feel so proud of my body without stopping in fear that I had leaked a little in front of dozens of strangers.

A Kegel squeeze is such a small, secretive motion that I didn't really think it would do much, even if I did a lot of them. But I was wrong. Plus, not being able to see myself do the work or get sweaty made it feel like I wasn't not really working out. By week three, however, I noticed that sticking to my Kegel routine really was making a difference on not just my body, but my attitude toward my body as well.

Did A Month's Worth Of Kegels Give Me A Vagina Of Steel?

There's no question in my mind now that doing Kegels for 30 days straight had strengthened my pelvic floor muscles. I may not ever take up vaginal weightlifting as one of my hobbies, but I can go longer between bathroom breaks and I'm less likely to spring a leak with a full bladder than I was before starting this experiment.

One of the best things to come from this experiment was that I was able to go out and do the things I'd done pre-kids without feeling the shame and potential embarrassment in the event something went wrong, like leaking during a workout class or accidentally peeing while I was having coffee with a friend and laughing. Even if there was no physical evidence to support that my body had changed and my pelvic floor tightened, the placebo effect still worked on me mentally.

What struck me most about doing Kegels for 30 days wasn't the physical change I saw, it was finding out just how common of a phenomenon this is for women who've had kids. I've always been terrified of suffering a bladder leak during a fitness class or while laughing with friends, but having so many friends admit to dealing with the same exact issue made me feel much less embarrassed about it.

I plan to keep up with my Kegel exercises all the same, but if the occasional bladder leak is the price I have to pay to be a mom, I can handle that.