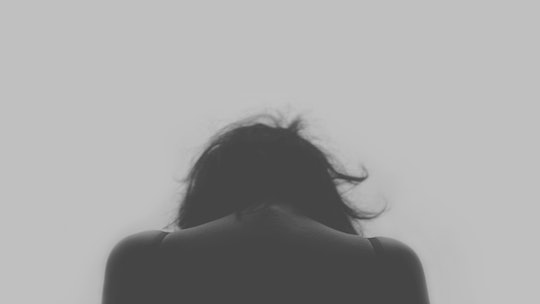 I Didn't Know I Had Postpartum Depression

I knew all of these things. I knew them so well I could rattle them off in my sleep. But I still didn't think of them for myself. Although I never went to the doctor and received a clinical diagnosis, because I didn't realize that something was wrong, I know that I had postpartum depression with my first baby. I know that I had it because I experienced pretty standard-issue PPD symptoms: feeling like I was in a fog, loss of interest in just about everything, feelings of hopelessness and despair, extreme guilt, trouble sleeping, and worthlessness.

I honestly loved everything about having my daughter and I have such wonderful memories of that first year together, but I also feel like I don't remember a lot of it because I was trapped in some kind of fog of darkness. I can vividly remember pushing her in her baby pink swing outside, where I spent every day alone, just me and her, and thinking, What kind of mother feels sad when she has so much? I honestly thought I was a horrible person for even feeling one ounce of sadness when I had a roof over my head, a beautiful and healthy baby, and sunshine on our backs.

We talked about my "change" and ways to help me feel better, but honestly, I think that deep down, we both felt like the way I was feeling was pretty normal for everything we'd been through. Only now, I realize it probably wasn't.

But the sadness I felt wasn't necessarily my fault, and the guilt I heaped upon myself only contributed to that. I hated myself for having any thought other than pure sunshine and rainbows, and whenever I inevitably did, I felt like the most ungrateful person in the entire world. My husband and I talked about my feelings a little bit, but neither one of us ever mentioned, or even thought, of a clinical problem. Despite having instructed so many other mothers to be aware of PPD and to understand that it's a mental illness just like any other, I still didn't make that connection for myself.

We talked about my "change" and ways to help me feel better, but honestly, I think that deep down, we both felt like the way I was feeling was pretty normal for everything we'd been through. Only now, I realize it probably wasn't. I'd gotten pregnant unexpectedly during my senior year of college and my then-boyfriend and I got married, moved, graduated, started jobs, had a baby, and dealt with two hospitalizations all within a six-month time period, so a little stress and disorientation was to be expected, right? I think both of us had no idea what "normal" was like anymore.

Things changed sometime after my daughter turned 1 year old. I was able to switch to a day-shift position, which helped my sleep deprivation, my husband graduated from college and found a job as a teacher, which took some of the financial pressure off of me, and I went back to school to do something for myself. I'm still pretty convinced that the hour commute to get to class saved my sanity more than anything I learned in my Masters program ever did.

But the point is, I got lucky. I got lucky because my depression could've very well turned the other way and headed further down a path of darkness. Slowly, I was able to realize that feeling lost in a fog and crying constantly was not what motherhood was all about. It's hard to pinpoint exactly what changed, but it was obvious when that brain switch in my head turned back to "normal." I had energy again, I looked forward to life instead of waking up dreading the day stretching endlessly before me, and I felt more like myself, the self I was before I had a baby. Being able to experience joy again felt like a rebirth for my soul.

Looking back, I wish so much that I would have realized that having a baby doesn't mean that your life has to feel like an endless black fog. And I wish I would've talked openly about how I was struggling to try and do everything without anyone's help — at all. I wish I knew enough to know that having a baby didn't mean absolute misery. That it could hard and fun, and that it was OK to feel both in the same hour — sometimes even the same breath.