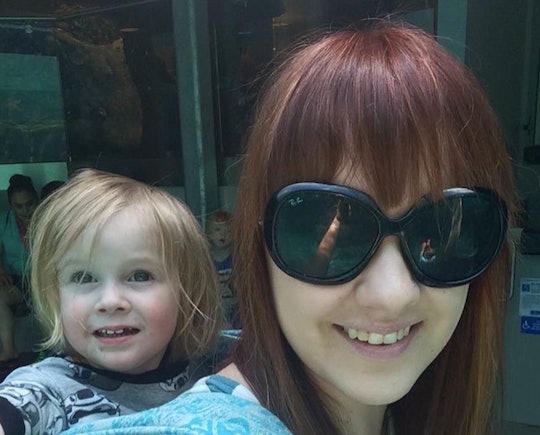 I Didn't Make My Own Baby Food — I Did Something Better

We didn’t have a choice, really. Blaise’s first solid food was the salmon he stole from his father’s plate when he was 4 months old. He didn’t choke. He housed that fish and went back for more. Yes, the AAP recommends that you wait to introduce solid foods until baby is at or around 6 months of age, but Blaise took the food; we didn’t give it to him, and he clearly wanted it. This fit with our philosophy of baby-led weaning. And it worked out for us: We didn't make our own baby food because Blaise skipped that stage completely.

We’d been given a recipe book for baby food when we had Blaise. I had never opened it, and always eyed it with suspicion. It seemed like a lot of work: chopping, puréeing, freezing, thawing. Then you had to painfully, slowly, spoon-feed the food to your child, when your kid might not be willing, when your kid might clamp his mouth shut and get purée smeared all over his face and in his hair. I had memories of watching babies spoon-fed when I was a kid, and those memories weren’t pretty ones. I couldn’t imagine spoon-feeding another human three times a day for months, especially when I had functional breasts that could feed him just as easily.

I heard a saying at a La Leche League meeting: “Under 1, just for fun.” It means that solids given before the age of 1 year old are to orient the child to eating, not to provide nutrition. That was my boobs’ job. I took that advice to heart basically because I was lazy and breastfeeding.

We didn’t push solids on him ever. What he got, he got from our plates, mostly to keep him busy at restaurants. But I never made him breakfast; he didn’t get a lunch or a dinner unless we were eating out. Instead, he had breast milk.

So we decided to forgo baby food of all stripes. We never made any, and we never bought any. Instead, we let Blaise have what he wanted off our plates. At first, he played with the food a lot. He mouthed it. He gummed it. He chewed it and spit it dribbling down his chin. Baby-led weaning is nothing but messy. He mushed food in his hair, up his nose, over his chest. But he was happy. His favorite first food was pickles. He'd steal them from our plates at restaurants; even his godfather, a pickle-hater, would order one for Blaise. He would pick them up, all flop and neon green, then suck the soft parts off the skin. We left tables littered with spit-covered pickle shreds.

Blaise tried everything. We gave him bananas and avocados, like every parent is supposed to. But we also encouraged him to try mushy berries, lettuce, crackers. He would sign “water, water,” and we’d suck up some in straw, then drip the liquid in the straw into his mouth like a baby bird. I often chewed up meat and fed it to him on my finger. He had his first fried chicken that way, at a BBQ restaurant in middle of nowhere, South Carolina. We gave him pulled pork the same way from another BBQ restaurant. There, he stuck his fingers in the sweet potato casserole and licked them off. He sucked on sweet pickles. He sucked on and masticated some fries. He was happy.

Baby-led weaning also meant that we recognized breast milk was the first food, and the best food, for the first year of his life. So we didn’t push solids on him ever. What he got, he got from our plates, mostly to keep him busy at restaurants. But I never made him breakfast; he didn’t get a lunch or a dinner unless we were eating out. Instead, he had breast milk. Breakfast, lunch, dinner: milk. Even with some occasional solids thrown in there every day (we were eating out a whole lot at that time in our lives), making it a point to feed Blaise "real food" was inconsistent for us. We just never felt pressured to give him more food than we did.

I never missed making baby food. Maybe some people enjoy cooking for their children and spoon-feeding them. I hate to cook, and I knew spoon-feeding would be a bore. We had much more fun just feeding Blaise from our plates. Sure, it was the lazy way out. But it was much more fun.

And in time, things shifted. When he was 1 year old, we started giving him a meal here or there, whatever we were eating, mushed or cut-up. Then I got pregnant with his brother, and his eating really took off. My milk didn’t dry up, but it definitely decreased. And as it decreased, Blaise ate more. We noticed he seemed to want breakfast, so we gave him yogurt. While I slept off my hyperemesis gravidarum medication, my husband took Blaise to the local taqueria. He was known there for his love of hot salsa and chips. He ate fish tacos. Tongue tacos. Whatever my husband ordered, he munched.

This was about the same time that we began giving him Thai food, with his own bowl of rice. He also liked sushi, especially avocado maki rolls, and Vietnamese Pho. We loved taking him to ethnic restaurants, and the cooks there loved having a tiny person tear through their native cuisine. We often had people come out and talk to Blaise, send him free food, or carry him around the restaurant.

I never missed making baby food. Maybe some people enjoy cooking for their children and spoon-feeding them. I hate to cook, and I knew spoon-feeding would be a bore. We had much more fun just feeding Blaise from our plates. Sure, it was the lazy way out. But it was much more fun. We didn’t have to tote little jars of food everywhere. And most importantly, Blaise enjoyed it. He was exposed early to a wide variety of tastes, which has primed him to be an adventurous eater. At 7 years old, he still loves hot salsa and avocado maki rolls and pho and Thai food. Though I wish he’d go easier on the soy sauce.