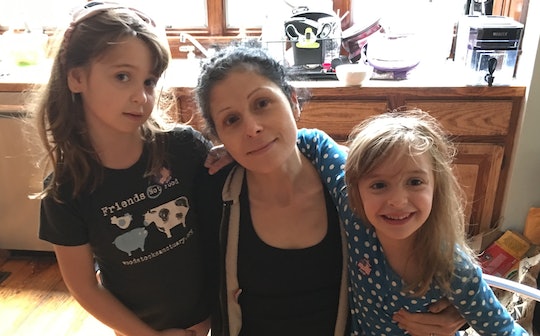 What Does An Ugly Duckling Mom Know About Self-Esteem For Her Kids?

I always tell people I was a late bloomer, but that is me being extra kind to myself. If I’m being totally honest, I was an outright ugly duckling, adopted into a family that was nothing like me. I had a lot to figure out on my own, and it took me a long time to get there. I won’t say I turned into a beautiful swan in the end, but it’s a goal I will work toward for the rest of my life. When I first thought about having children, I assumed I’d make a terrible parent because of how rough around the edges I still felt. I considered the many unresolved issues I had around my self-esteem, my body image, my sense of self, and I felt wholly unqualified to raise humans of my own. I had not had strong role models in my family, so I turned into an adult with a colossal case of impostor syndrome, faking my way through adulthood, pretending I knew anything about anything. I constantly expected to be found out and exposed for the fraud I knew I was. The one thing I was sure of was that I didn't want my own kids to live my experience, live my childhood.

I remembered how it felt to be snapped at, to be shamed.

Becoming a parent meant I had to do some major work on myself. I did not want my daughters to grow up with my body image issues, disordered eating, and all-around poor self-confidence. I did not want them growing up feeling deferential or inferior to boys. I wanted them to love their bodies and not hurt them the way I had mine. I did not want them to be anything but their very best, courageous, confident selves, whoever and whatever that ended up being. But I didn’t know where to start. Therapy seemed like a good idea. Reading parenting books. Asking friends with kids older than mine. Developing a gentle yet consistent yoga practice that was regular and somewhat rigorous exercise that did not involve instructors who yelled at me or music that I hated went a long way toward my finding peace in my own body. Most of all, I began to parent instinctively. Yes, I talked, I read, I asked, I observed. But more importantly, I remembered. I slowed down and thought carefully about what it was like being even a very young child. I remembered how it felt to be snapped at, to be shamed. I remembered how it felt to be told “because I said so,” instead of getting an explanation that made sense. I remembered how it felt to learn about how families work not by participating in my own family, but rather by reading novels about families and hanging out at other people’s houses. I remember how it felt to be shut out and shut down rather than included, embraced, snuggled, and validated.

So I let the little girl inside of me lead. When I found myself snapping at my kids or running out of patience, I remembered how that felt. When I didn’t want to take the time to explain something, I remembered how that felt. When one of my daughters asked for an extra hug when I felt I had no more hugs to give, when one of them asked me to read one more book when I thought I would scream from the frustration of extended bedtime, I thought about how it felt to be told “no!” for what felt like no good reason, so I said yes instead, and offered a hug or another book. What did it hurt to give in to the little things that took minimal effort on my part but meant so much to them? If I could just try to see things from their perspective, I would be an empathic parent. If I could just say yes more often, even when every fiber in my body was screaming no, my girls would feel valued, and seen. If I could just take the time to explain the joke or spell the word or tell them what it was like when I was little, or listen instead of evaluate and judge, they would know that their questions are worth asking, that their worries are not silly, and that they are heard, and loved. I don’t always get that part right, but I try. And when I mess up — because I always do — I apologize. We talk about it. I try again.

We prioritize family time. We do things as a foursome; we hang out at home and work on a puzzle or bake cupcakes, we go to museums, to movies, to plays. We’ve developed a zillion family traditions we feel like we’ve been doing forever and they’re really just excuses to spend more time with each other. The girls love when we are all together, and they crave special Mama time or Daddy time. Sometimes during one-on-one time, we just do: we go roller skating, bike riding, food shopping. We get our nails done, go for a big plate of French fries, go to the park, we play math games, sing songs, take out books from the library. But other times we walk for what feels like miles, or we sit and drink hot chocolate, or we snuggle under a bunch of blankets, and we talk. They talk to me and I listen. And then I talk too, and they listen.

Sometimes we talk about hard things — and that’s hard. I worried for so long about what I would do when big questions came up. How much would I tell them? What would they be ready for? What would I be ready to share? Would it be helpful for them to know what a rough adolescence I’d had, what a late bloomer I was? I worried I’d get it wrong, that my truths would affect their self-esteem and make them question not only who their mother was, but who they were.

I worried that I’d make a tragic misstep when they asked about my past and the mistakes I made. I felt almost compelled to develop a persona that I wanted them to see rather than the one that really existed, but as my daughters grew older and their questions got harder, I found it easier to answer them authentically than I ever thought possible. I decided it would be better to just tell the age-appropriate truth as much as possible instead of sugar-coating or flat out rewriting my history. To explain that my decisions and the mistakes I made were mine, and that we all get to be different because we all are different. That we have individual wants and needs, we don’t all have to do the same things, and that each of my girls can make her own decisions in time. I’d come to understand that nobody really knows what they’re doing as a parent; we’re all just making it up as we go along. If we are all impostors, then we are also all equally authentic; just fumbling along and doing the best we can.

She paused and asked me if I’d liked being a child. I thought about it for a moment.

I got to practice this recently. When my 8-year-old daughter and I went on a long bike ride a few weeks ago, we had one of our heavier talks. She was telling me about a book she was reading in which the main character’s father ran away with a dental hygienist in the middle of the night, and our conversation got serious very quickly. We talked about marriage for a while, and then divorce. Somehow, she knew I’d been married before I married her father, and she wanted to know more. It sounded like she wanted reassurance that her daddy was the true love of my life. I told her I thought people make bad choices because they’re afraid of something, and I told her about some of the things I’d been afraid of when I was younger that I am not afraid of anymore. We talked about honesty and integrity and what it means to be kind instead of mean. I told her how in the book I was reading, Michelle Obama’s mother had told her that bullies are scared people hiding inside scary people, which taught her to have compassion for even the worst things people do. Then my daughter asked what a dental hygienist even was, and that got us talking about teeth and sugar and junk food, which led to weight and body image. She asked hesitantly if I thought she was fat and I told her without answering her that a better question was whether she loved her own body and felt like she treated it well. She shrugged and said yes, that she liked her body the way it was and I wanted to stop time because I had a daughter who liked her body exactly the way it was but I just smiled and said that’s great and that’s what really matters.

And I squeezed her hand and she changed the subject entirely and told me about the drama of being a third-grade girl and who’s mad at whom and who’s being mean to whom and how she tries to keep the peace, and I was relieved that we were back in third grade and talking about the politics of being an 8-year-old girl instead of still talking about loving one’s body and making bad choices and being afraid.

Suddenly, she paused and asked me if I’d liked being a child. I thought about it for a moment.

“No,” I admitted. “I guess I didn’t. I wanted to grow up. I thought being an adult would be so much better because I’d have more freedom.”

“That makes me sad, Mama,” she said, and put an arm around me. “Because I love being a kid.” She snuggled into me. “I think I’ll like being a grown-up too, but I really love being a kid. It’s fun! I wish I could stay this way a little longer.” She leaned into me and I put my arms around her. We sat that way for a long time, silently, just breathing each other in.

“I love you,” she said, breaking the silence. “And I love myself too. I’m really happy, and I hope you are too.” We hugged each other a little tighter, and in that moment, I felt like a swan.