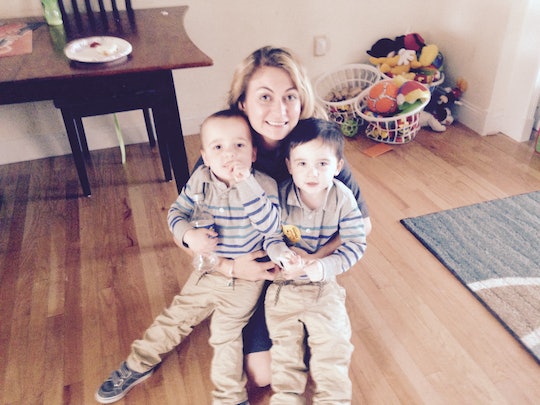 I Disciplined My Twins Differently For A Week & Here's What Happened

Although I love having fraternal twins, I work hard to parent my twins as individuals, not as though they're the same person. I try to allow my kids the freedom to explore their own interests, wear clothes they like ,and eat what tastes good to them (though at 3 years-old, that's often mac and cheese for both). When it comes to disciplining my twins, I stick to the same technique for both, and even then I can't find a discipline technique that seems to work.

Sometimes I take toys away, sometimes I try putting them in timeout, sometimes I refuse to give them a treat they were promised, and then sometimes I lose my cool, yell, and then go cry in the kitchen by myself until I calm down. Sometimes they behave better, sometimes they don't. I know part of their behavior, as frustrating as it is, is just typical child development, and my friends warned me that raising threenagers would be tough, but I started to wonder if the reason why nothing seems to be working is because I'm treating them as the same person when it comes to discipline. Perhaps treating my twins as individuals would have a positive effect on their behavior.

For one week, I disciplined each child in the ways that seemed most effective for them. We have three house rules: Don't throw toys, don't hurt another person, and no climbing. Breaking one of these rules gets you a warning, and if you don't heed the warning, then you get punished. My son Lolo responds well to being put in timeout or being told to go to his room, while his twin brother, Remy, treats timeout like solo play time. Remy hates when he's denied screen time or told he can't have a treat, but Lolo prefers reading books to watching shows and as his habit for stealing my pizza indicates, prefers savory to sweet anyway.

So for a week Lolo was disciplined with timeouts and Remy got his screen time taken away or wasn't given a treat when his brother was. Would disciplining my kids differently turn them into angels? I was about to find out.

I started the week full of good intentions, ready to magically transform my kids into perfectly behaving Stepford kids, so I was really disappointed when we hit a snag on day one while at the grocery store. The boys started to pull food out of the cart even though I repeatedly asked them not to, eventually busting into a box of granola bars while I picked apples. This meant that Lolo had earned his first timeout of the experiment, and Remy would no longer get his half doughnut treat they usually have after a successful grocery store trip.

But pushing the cart into a quiet part of the store so Lolo had his timeout effectively meant Remy was punished with a timeout too, so denying him his doughnut treat seemed like he was being punished twice. And if I don't give Remy his half doughnut then, do I reward Lolo for no reason by giving him his brother's piece? I gave Remy his treat, unsure if he understood that the timeout was for him as well. And suddenly I understood why my mom liked to grocery shop without me when I was a kid.

When we were at home, it was a bit easier to put Lolo in timeout as needed or take away Remy's screen time. But a family trip to Panera for dinner and a furniture store after to size up a potential new couch made trying two separate discipline techniques a disaster. I bought the kids a heart-shaped cookie when we left dinner and told them if they were good in the furniture store they could have the cookie on the way home. Both boys said they understood, but we were in the store less than five minutes before Remy started pitching a fit and screaming to get out of the stroller to sit on the furniture. I reminded him of the cookie bargain, but he continued to make a scene, so we left the store and got back into the car, where I gave Lolo, and only Lolo, his promised cookie.

Remy was inconsolable the entire way home. The next morning he was still talking about how I didn't give him his cookie, but I gave it all to Logan. He even ratted me out when he called Grandma on FaceTime, so on top of his guilt I had to explain to my mom why I denied her sweet grandson a treat.

Although it was obvious that taking away Remy's treats resonated with him — because Lolo never had his treats taken away — I started to worry that Remy wasn't making the connection that his brother's timeouts were the same as him not getting a cookie. A few days later when I went to give both kids a yogurt pop Lolo tried to take both and said,"No for Remy!"

So yeah, I accidentally created a hierarchy among my kids and felt absolutely awful that Remy might've thought I was playing favorites.

Is This Messing With Their Brotherly Bond?

As adults, my sister and I will often bond over rehashing stories of when we were kids. Even though she's almost four years younger than I am, because we were both grounded when we did something wrong, we can relate with each other about what it was like when our parents sentenced us to a weekend in the house. We handled being grounded very differently: I'd sob because my parents were "ruining my life" and then slam my door dramatically, then I'd come out a few minutes later with a written list of chores I could do around the house in order to get myself early release and a ride to the movies Saturday night (since my mom was a fan of freshly mopped floors, oftentimes this worked); my sister, on the other hand, was the exact opposite. If my dad told her she was grounded, she'd respond with a shrug and a "whatever," leaving him slamming the doors in frustration. Then she'd spend the weekend giving my parents the cold shoulder so by Sunday morning they were making her pancakes in an attempt to get back on her good side.

But even with these totally different reactions to receiving the same punishments, being treated the same when we misbehaved is part of what makes us siblings. She's the only person in the world who knows what it's like to be raised by my parents, and I worried that by disciplining my own kids differently I'm denying them of these same fun stories and bonding moments later in life.

It's Not What You Do, It's How You Do It

The good news is as the week wore on I did start to see some improvement in the boys' behavior. They were more likely to stop misbehaving after a warning, and instead of having to pick Lolo up and place him in time out or wrestle the iPad away from Remy, they seemed resigned to their punishment and would hand it over or go to the corner without a fight. But what I wasn't expecting was that they would both do it. If they were having screen time and I told Remy to give me his iPad, Lolo would often hand his over as well. When I told Lolo to get in timeout, Remy would try to go with him.

I realized that what had been missing from my discipline techniques before this experiment was consistency. I was so busy trying to find something that worked that I'd jump from timeout in the corner to no screen time, to timeout in your room, to no treats, all often within a single day, and the kids had no idea what to expect when they did something wrong. It turns out they both respond well to either having treats taken away from them or timeout, it's just that I never gave either discipline method a real chance before giving up on it.

I tend to put a lot of pressure on myself when my kids misbehave. Ninety percent of the time they're great kids, but when they act up or don't listen to me I immediately blame myself for their poor behavior and look for an automatic solution. Seeing how they both respond to the same discipline method if I'm consistent with it was a good reminder that parenting takes time and doesn't happen instantly. My kids may not be perfectly behaved at all times but that doesn't mean I'm failing as a mom.

Is Disciplining Kids Differently The Key To Better Behavior?

I thought tailoring discipline to my kids' individual personalities was me being a much more sensitive, tuned-in mom, but really, it just felt like a lazy solution to raising 3-year-olds. The truth is there are no parenting shortcuts. Maybe using different discipline techniques works for some families, but for me, being consistent with a single discipline method for both kids is much, much more effective than trying to punish them differently.

I know I may be making some mistakes, but at least if I make the same mistakes with both kids they'll hopefully look back and laugh together instead of feeling like I was playing favorites by treating them differently. It's timeouts for everyone around here, because it tends to work, but also because I can't stand how sad Remy looks when I tell him he can't have a cookie.