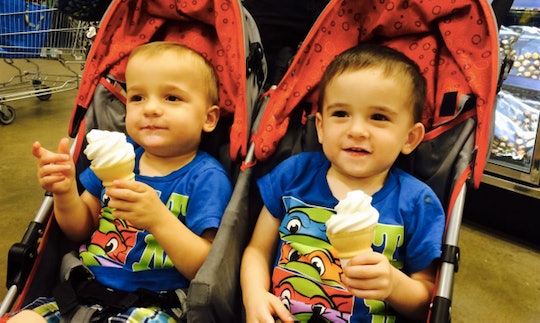 I Treated My Twins Differently & Here's What Happened

My partner and I are currently deep in the horror that is the terrible twos, and I hear raising three-nagers is no picnic, either. My twin boys have meltdowns over everything, but they can usually be sourced back to one thing: not getting what they each want to wear, eat, play, or do. I know that my sons are individuals first and twins second, but because they're so young it's just so much easier to feed them the same foods, dress them in similar outfits, and parent them the same. As they get older, their needs and wants will no doubt change (and change and change and change). As of right now, my method of coping with their dramatic outbursts over not wanting to do the same thing is by dooing whatever is easiest for me. My thinking has always been if they’re the same age, they should be happy doing the same thing, and in the event of a stalemate, the queen (that would be me) decides.

But I realized that perhaps I wasn’t being fair. If I had two kids of different ages, I might not do that as often. Maybe some of my kids’ frustration wasn’t simply part of being 2 year olds, maybe they just wanted to be recognized as individuals. I've spent so much of my parenting journey so far just trying to do and get through that I hadn't really stopped and considered what parenting my twins using different styles might look or feel like.

I decided doing twice the parenting work would be well worth it if it cut down on half of the tantrums. So for one week I let each boy call their own shots when it came to what they ate, what they wore, what they played with, and how I interacted with them. I knew that meant more work for me and their partner, but what the hell, I was ready to try anything if it meant we'd be free from the Terrible 2s for even 30 seconds.

Here’s what worked, and what didn’t.

The Stomach Wants What It Wants

My kids are at the point where they have an opinion on what they want to eat, but often they request different things for breakfast and lunch, and I usually make whichever of the two that sounds better to me (spoiler alert: it’s always peanut butter and jelly). This leads to one child munching happily and the other pouting until they finally get hungry enough to eat.

This week, I embraced the extra kitchen duty and made them each their own individualized meals, certain that it would cut down on both food waste and crying. And it did ... kind of. Most meals they were happy with their customized plates, and a few times they decided last minute that what they really wanted was what the other one had. With the exception of one glorious lunch when they switched plates without an issue, often the meal ended in tears because they were mad that they didn't have the same thing.

It was hard for me to not get mad with them, since I was trying to please them by making custom meals, and their version of “thanking me” was by freaking out even harder. I tried to remember that they’re still learning how to express themselves and hoped the crying meant they were frustrated by not knowing what they wanted to eat rather than just trying to be brats. No matter how hard I tried, it seems like mealtime is also tear time, no matter what I do.

I dress my twins in matching clothes for two reasons: because it makes it easier to keep track of laundry, and because it’s adorable. While each of my kids looks like one of their parents, you’d never guess they were siblings, let alone twins. I never thought I’d say this, but I miss the fuss that people would make over them when they were infants. Having people get excited over my twins gives me a teeny glimpse of what it’d be like to have fans come up to you as a celebrity, and I like it, so I keep the attention coming with matching outfits.

Sometimes the boys demand to wear the same thing, but there are days when they don't want to match and they’ll try to strip naked if I force them into something they’re not 100 percent OK with. But this week, I let them create their very own #OOT, and it was amazing. Not only did getting dressed in the morning go much more smoothly, but I was impressed by their ability to match colors and patterns. In fact, I’m fairly certain my son Remy has a better sense of style than I do.

My concerns about losing the spotlight were for naught. People still came up to the boys to say hi and the topic of their age and the fact that they’re twins eventually came up. Sadly, still no autograph requests, but I’ll live.

Hands down the hardest part of parenting for me (apart from the sleep deprivation) has been feeling like I have absolutely no clue what I’m doing. I’ll read an article about timeout, and when it doesn’t work consistently, I’ll move to something else, like making empty threats by warning that, if they don’t eat their mac & cheese, I’m “never making it for them again.” It never really occurred to me to stop and think about whether a discipline technique was ineffective for both kids; I’d simply have a rough day and move on to trying something else instead. But parents with kids of different ages surely must use a variety of behavioral techniques, so I tried different parenting styles on each of my twins based on what they responded to best.

I’d previously written off timeout as a waste of time, however, monitoring it more closely made me realize that for my other son, Lolo, it’s a good solution. He gets worked up much faster than his brother, so giving him some quiet time away helps him calm down. He’ll come out and apologize to me, and his brother uses timeout as an opportunity to try and entice me into playing Tag.

Remy responds well when you explain to him exactly why you want him to stop doing something. Lolo gets silly with the attention and acts out more, but Remy will listen to what I’m trying to tell him and will even point out what not to do after the fact, walking up to the computer and telling me, “don’t touch ‘puter!”

Using discipline techniques that are individualized for each child didn’t magically turn them into perfect angels, but it drastically cut down on the number of times per week I cry alone in the bathroom while eating from my secret stash of peanut butter cups. It’s made parenting a lot less stressful for the time being because I’m not yelling as much as I used to.

My boys will continue to show me their unique personalities as they learn to express themselves more, which means I’ll have to adapt and change how I discipline and talk to them. It’s more work, sure, but it’s exciting.

Being Twins Doesn’t Mean They Automatically Like The Same Things

I don’t begrudge the boys the fact that Lolo prefers the comfort of a stuffed animal while Jeremy is running game on a train of pacifiers. But when it comes to toys and hobbies, I admit to trying to get them to enjoy the same things because it is both easier and cheaper for me. Playing with the same toys means there’s less to clean up, and after a long day, the last thing I want to do is to clean up 16 different sets of toys.

Prior to this experiment, we had enrolled both boys in swimming and soccer — even though Lolo hates the water and Remy spends all practice laying in the goal pointing out clouds. But we were allowing each boy to “do you,” so I wasn’t going to force one to swim or to play soccer if he didn’t want to. When Remy wanted to leave the soccer field to pick up rocks, I let him. When Lolo wanted to dump out all the puzzles while his brother still had every single block we own strewn across the floor, I stepped back and let it happen.

In all honestly, they were happier, but I spent the week swallowing my frustration. When cleanup falls largely on me, it’s hard to willingly watch a bigger mess be made. And I felt resentful missing out on watching one of my kids play soccer because the other didn’t want to. It would’ve been worth it for me to deal with some whining and having to goad Remy into participating in order to not miss out on the action.

What I Learned At The End Of The Week

This experiment was a great reminder that just because my boys share a birthday doesn’t mean they have to share everything else as well. Treating them like individuals rather than a unit helped me identify which of their behaviors are typical toddler angst, like getting frustrated at meal times, and what tantrums I can avoid by treating them like their own unique person.

I don’t know that I’ll continue to play short-order cook, mainly because I want my kids to learn that you can’t always eat exactly what you want when you want it and the social skills gained playing soccer and swimming are too important to stop doing those activities, but when it comes to letting them pick their clothes and matters of discipline, I’m going to let them do their own thing.

Having my children at the same time doesn’t mean they’re the same person. They’re just beginning to learn they’re different — and I want to nurture and encourage that.