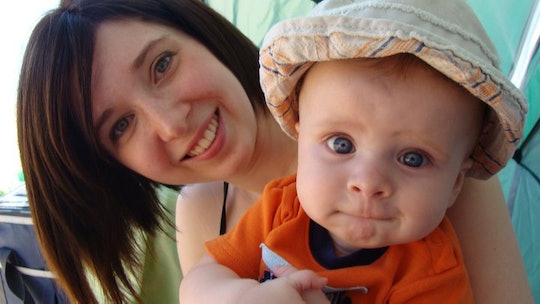 Why I Love Being A Millennial Mom, No Matter What Anyone Says

When I was pregnant with my son at 21, it seemed like everyone felt compelled to ask my age or comment on how young I looked. A youthful face and a round stomach made people completely lose their filter around me. I'd regularly be asked if my son was planned. I received unsolicited advice constantly. Everyone seemed to have their own way of telling me they thought I was an idiot for having a baby so young. Comments like, "I can’t imagine having a kid at your age," and “Do you think you’re ready to have a baby?” were par for the course, as were warnings that my partner and I would "never get to travel, sleep, or go out to eat together again." Often times people stared at me in disbelief, saying:

You're just a baby yourself.

Truth is: I love being a Millennial mom, no matter what anyone has to say about it. And even though I understood that most people probably didn’t mean to be offensive, implying that I was being foolish by choosing to become a young mother was still incredibly insulting. The decision to have a baby at any age is deeply personal and not something I'd ever take lightly, in part because of my age. I knew the sacrifices I'd have to make. I knew my life would change drastically. I knew my choice wasn’t the norm, and though it certainly wasn’t for everyone, it was still my choice, and it was right for me.

I wanted to have children young, not because I was naive or stupid or because we accidentally got pregnant, but because I weighed my options carefully and decided it was the best option for me. Yes, having a child when you are young is hard — having a child at any age is hard — but there are also many benefits that have made it worthwhile.

I liked the idea of having children young so I could have the energy to keep up with them. I am still a relatively young mom at 27 with three kids, and I find myself thinking how much harder it'd be on me to start having children now. We've settled into such a routine (which, admittedly, has been in huge part because of the kids) that it's difficult for me to picture fitting kids into the mix now. My children have helped me find out want I want from my life — and they've done the same for their father. They give our careers purpose, they bring our days joy, and they've provided the backbone to our lifestyle. They are so much a part of who we are as a family that I can't imagine what life would look my for me now if I didn't have them.

I also decided that I wanted to have kids young for the sake of my career. Over the years, I've had the opportunity to build my career slowly while my kids are still little. I don't work in an office, so I've been able to craft my business and the way I want my career to take shape from my home. Yes, we could've made the choice to wait to have kids, but having them young meant that I'd be ready to move full-steam ahead in my chosen field when the time came. For us, that made sense. I’ll be empty nesting in my mid-40s, and I’ll have so many life experiences still ahead of me.

Having kids young isn't the choice for every woman, and I don't claim to think it should be. But the choice worked for our family, and most importantly, it worked for me.

I won't lie and say that the judgements people cast down on me for having kids too young didn't bother me. They did. I used to feel a need to prove those people wrong or justify my decision to them, but the more I settle into motherhood, the less I feel compelled to explain myself to others. I know why I made the choice to have children young. I know the benefits and downfalls and making the choice to start our family the way we did gave me what I wanted from parenthood.

Being proud of having my kids young doesn't mean that my choice is somehow better or smarter than anyone else’s. It just worked out that way for us. Likewise, women who choose differently make that choice because it also works for them. But being a young mom doesn’t make me an idiot anymore than being an old mom makes you a genius, and though I've moved past the comments and the back-handed insults, they still take shape from time to time. Through time and experience, though, I've learned to brush it off. Yes, we had kids when we were still really young. So what?