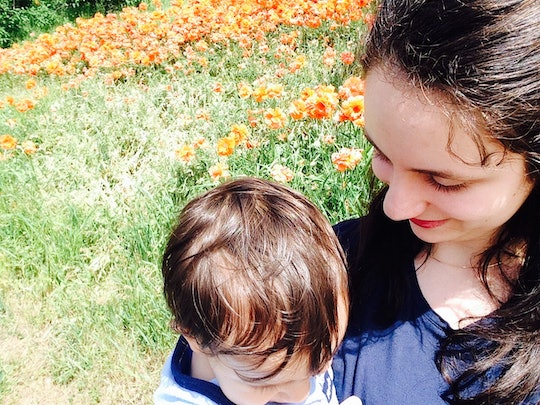 I Don't Know Where I Fit In As A Mom, Even Though My Kid Is 1

I became a mother the day I thought, “Maybe I shouldn’t drink this vodka soda because maybe I’m pregnant.” Motherhood enveloped me like a thick fog, seeping through my pores. It went deep into my soul, shifting my life, throwing everything up into the air while I watched to see where the pieces would fall. To say it was a serious life change would be an understatement. Early on, I embraced this new part of myself, but even after giving birth to a baby boy, I never felt like a Mommy. Matter of fact, I still don’t.

Raising Henry, my son, has taught me countless lessons. We get each other in a way unparalleled by anything else. We’re a single unit, two people woven together by blood and time. Identifying as a mother within my family unit was easy because they see me as a whole person. I bring more to the table than just being “mom.” As an American, though, our culture stamped the generic “mommy” label on my forehead and shoved me to the side after I pushed this little human out of me. Prior to Henry’s birth, every motivational poster and ad campaign told me I was special and that I could do whatever I wanted, though when my 9 pound, 6 ounce son arrived, everything changed.

Instead of asking what I did for a living, people wanted to know if I used cloth or disposable diapers. Instead of striking up a conversation about journalism or food (two of my obsessions), people wanted to talk about if I got an epidural or not, and why. I’ll never forget the first time an adult addressed me as “mommy.” I was in the check-out line at the store and the clerk said to Henry, “And what do you and mommy have planned for today?” I cringed. I’m sure she meant well, but I felt troubled. I’m so much more than just his mommy! I wanted to tell her. And mommy has plans that don’t revolve around baby!

Part of my problem might’ve my media consumption. For the first few months, I spent a lot of time nursing Henry and watching mind-numbing TV. All the mothers I saw fell into one extreme or another, and I didn’t identify with any of them. Questions started to appear in my mind: When do the self-effacement and lingering depression start? What is a "mom haircut," and should I get one? Did I just buy mom jeans?

I hope the answer to all those questions is: Never.

On a show like Modern Family, Claire is the tight-ass mom and Gloria is smothering. We don’t get an in between to choose from. We don’t always get to see our likeness depicted on screen. The show doesn’t let the women veer from these stereotypes without consequences. In a recent episode, Claire and her husband Phil want their daughter’s live-in boyfriend to move out. Phil wants Claire to handle it so he can maintain Cool Dad status, but Claire isn’t having it. She says, “Well I can be cool too. I’m cooler than cool. I’m frigid.” So Claire makes Phil handle it … until he messes it up and she steps in to save the day, ending her smackdown of the low-life boyfriend by saying, “Sorry, I’m not the Cool Mom.” Why isn’t she? Why can’t she be the Cool Mom and the Mom Who Knows How To Get Sh*t Done?

I remember hanging out with some friends when my son was 6 months old. I made a joke about a sex swing, as one does. My friend looked at me, with clear shock in his eyes, and said, “Devin, you’re a mother now!” I wanted to reply: So what? My friend thought that what I said was inappropriate when, a year earlier, my lewd jokes made him laugh. Now that I was a mother, though, a new set of scripted rules applied — and sex-swing jokes were nowhere on the list. Not only was I exhausted and learning to parent, but now I had to grow a new sense of humor, too. The occasional joke about sex swings wasn’t the only stereotype that left me feeling out of place. I’m wretched at DIY and I don’t like cooking extra meals for picky eaters. I don’t sit around and complain about my husband for sport, and I don’t stop Henry from watching a little TV now and then. All those things that society just assumes moms should be good at, I'm not. All those things you're supposed to do, I don't.

I feel like all of the sappy commercials and mother-targeted ad campaigns attempting to celebrate mothers miss the mark. They're just marketing ploys, and marketing always goes after the caricature, not the reality. It was something I knew in a vague sense before having Henry, but now it’s unavoidable. When I hear a boss ask a woman how much she’ll be working during her maternity leave, it stings. When I see a mother belittled by an acquaintance who says, “Oh, so you’re just a mom now?” I get irritated. The world is so hard and so demanding. If a woman has a child, she’s given a whole new set of expectations — some spoken, others not. Bosses should support a woman’s right to use her maternity leave to bond with her baby. We are raising the next generation, not watching American Idol reruns. (Though, sometimes we are watching reruns, and TBH, they're awesome.)

Raising kids can feel like a lose-lose situation. It’s not just one thing. It’s so many millions of things all rolled up into one child. Women with kids, much like any other woman, deserve to figure things out on their own time, according to their own rules. That’s the beauty and the challenge.

As my 1 year old gets busier by the hour, I agonize over what label of motherhood best “suits” me. I remember that I just am. I am Devin. I once won an award for “least decorated desk” at my job. I inherited a chilling evil eye from someone in my family (who I won’t oust in this article). I ran a marathon and I almost have a black belt, and when I hear the song “I Feel Good” by James Brown, I cry. I am Devin, and I am Henry’s mother, too. Becoming his mother has been an experience so complementary to my life, but it’s not the sole purpose of it.