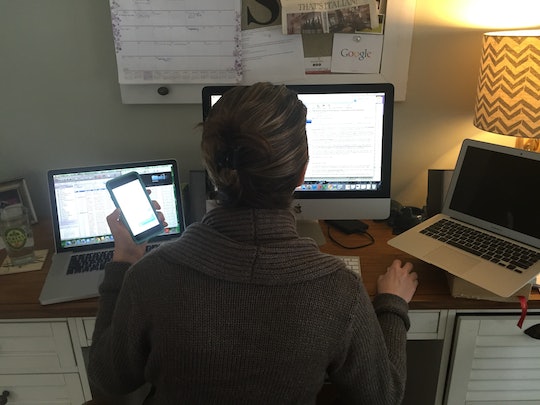 I don’t believe in New Year’s resolutions. I’m of the mind that if you want to do something, you should just do it. No need to wait around for a new year to make a proclamation. I’m also not into making big productions of things I’m planning to do because most likely I’m only going to do them for the first couple of weeks of January before realizing it takes too much effort, which is why I never did them in the first place, and give up. I don’t need extra pressure. Which is why I don’t make New Year’s resolutions.

Except for maybe this year. Something’s different this year. I feel the need for a change. I’ve been feeling it for a while actually, but in the last couple of months it’s become even more pronounced. My daily routine isn’t working. I’ve been doing the same damn thing every day for approximately the past millennia (or at least the last couple of years), and while I suspect my habits are unhealthy and I’ve felt myself grow dispirited, I’ve been unable to pull myself from this routine.

I’m not talking unhealthy physically. I mean more mental health-wise. My problem seems to stem from my chosen occupation. I’m a writer, which means I spend a whole lot of time locked away in my office in complete isolation. It also means I set my own schedule, which sounds great unless of course you’re no good at managing your own schedule. I’m not. But it’s not because I goof off all day or waste all my time on Facebook. I only waste some of it on Facebook. It’s just that I think if I sit and never get up I’ll get evenmore done when actually the opposite may be true. I think I’d be more productive if I took a little break every now and then. I just never do.

My schedule goes something like this: write. Write, write, write, write. Eat some Cheese Its. Write some more. Pick up the kids. Write, write. Scream at the kids because I’m trying to write. Make dinner for complaining kids. Kiss my husband hello when he walks through the door from work. Put the kids to bed. Go back to my office to write some more. I rarely talk to anybody adult-size, and I hardly ever leave the house. And it’s starting to wear on me.

My situation is reminiscent of the one I faced a few years ago when my kids were infants and I did nothing but care for two little people all day, neglecting to shower, eat or leave the house oftentimes. Feeling stifled and shell-shocked, I knew I had to make a change, so I made the obvious choice. I enrolled in a volleyball class. I long wanted to become the super star volleyball player I always knew I could be and with my husband’s encouragement, I became the mediocre volleyball player I’d hoped I was better than. The class was tough to squeeze in amid the endless needs of small children, but my needs were equally as important. While my volleyball career didn’t last forever, I stayed with it a good deal longer than just the first few weeks of the new year. I completed the season and even signed up again the following semester. The experience wasn’t just positive for me. It benefited all parties involved. After the classes I felt renewed and those feelings flowed over to my children and husband. I had taken a small but much needed break and was better able to do my job for it.

Like then, now I realize I need to do something. I need to stretch, to move. I need to go outside. I need to notice the sun or the stars in the sky or feel the rain. I need eat lunch. And maybe even see people. I don’t have a commute so I don’t have even that minimal stimulation or interaction with the outside world, and I fear I may be losing all social skills. Soon I may only grunt and scratch myself. My isolation is so complete that I actually look forward to going food shopping. It’s one of the few occasions where I leave the house, enter the real world and get to brush up on my human skills.

Recognizing my deteriorating situation and my compromised metal stability recently, I tried setting a new and improved schedule. A few months ago I determined I was going to exercise regularly. Since joining a gym last year, I’ve never followed a regular schedule, which may be why I still don’t possess rock-hard abs. Certainly, I could carve out time to run to the gym three times a week. OK twice. Once? My new plan would not only force me to leave the house, thereby facilitating practice of waning social skills, but also the exercise would be good for my physical and mental conditioning, allowing me to clear my head along with my clogged arteries. Perhaps if I got up at 6:00 instead of 6:30 and went straightway. But something always stopped me – an email, a hilarious Facebook update I just had to post before I forgot, a deadline. And once I sat down at my desk, I never got back up.

I know it’s unhealthy to sit in front of a screen for endless hours. There’s only so much you can demand of your body or mind. Which is how I know I’m not being productive all of those hours, but I find it hard to walk away when there’s always more to be done. How do you stop when there’s more, there’s always more? I’ve never been good at stopping. That may be why I’ve had a gift certificate to a yoga studio sitting in my desk drawer for over a year now. I keep saying I’m going to go. I’m going to call up and get the schedule and go. I need a little positive chi and inner serenity in my life. But I never do call. Who has the time? How can I fit in something for myself even if I’m again feeling closed off, dispirited, one-dimensional?

So I put it off because I must get all the work done. I need to get it all done. But that need is an impossible one to meet. And, I need balance, too. We all do. So this year I’m making a vow to find balance. Or at least attempt balance. Because it’s not only healthy. It’s necessary.

More Like This
How To Stop Breastfeeding A 2-Year-Old
Jenny Han Wanted Both Moms & Teens To Feel Seen In 'The Summer I Turned Pretty'
Is It Safe To Keep Using Period & Fertility Apps In A Post-Roe America?
Some Movie Theaters Are Banning Teens Dressed In Suits As Part Of Viral 'Minions' Trend