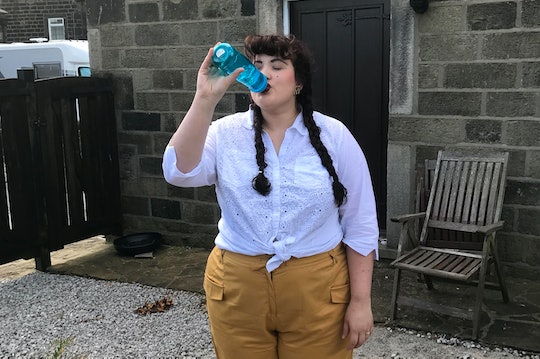 I've never been an avid water drinker. I vastly prefer the refreshing taste of blueberry juice, or the cooling feel of sweet Moscato as it hits the back of my throat. Of course, water's purported benefits have not eluded me; for decades I have been told that drinking more water will give me clear skin, fill me with energy, and rid me of unknown toxins, whatever the hell they may be. Most of the time, drinking a lot of water just makes me need to pee. But since having a baby, I've been hearing all about how drinking lots of water will increase my milk supply. So I thought it was high time to give it a go.

From the day my daughter Luna was born, I've struggled with pumping. I mean, the process feels like a full-time job. My midwives have thankfully assured me that Luna is getting enough milk when she feeds directly off my breasts, but when I try to pump, I just can't get a whole lot out. It usually takes me two days to fill a four-ounce bottle, and that's only if I pump three times a day. So if I want an eight-hour break from mothering to visit friends in the city or achieve a full day's work from a local coffee shop, I need to preemptively pump for a few days.

Needless to say, it's been extremely difficult for me to get any time to myself. So I was willing to try anything to increase my supply.

My mother has long sworn by the "eight eight-ounce glasses of H2O a day" rule, or 64 ounces total. But the pregnancy blog Mother Rising recommends 96 ounces a day for nursing mothers, who lose quite a bit of fluids throughout the day.

It's a number I've seen pop up before; in 2015, for instance, Bustle beauty writer Maxine Builder consumed this seemingly absurd amount of water every day for a week. While she didn't notice marked improvements in her skin, Builder realized that there was one advantage to drinking bucket-loads of water: it didn't leave a whole lot of time for arguably unhealthier choices, like drinking tons of coffee.

After scouring my cabinets, I found a 20-ounce water bottle that'd carry me through this experiment. Committing myself to refilling the bottle five times a day (leaving a little out of the fifth and final water bottle), I began my challenge. My hope was that by amping my supply, I'd be able to pump enough to get a little more time outside the house. I wanted a little more time to be a full human, and not just a mom.

I began Day 1 at 8 a.m., chugging the first 20-ounce bottle immediately after I woke up. I generally wake up with a very dry mouth, which is made all the worse by summer humidity, so this was actually a welcome change to my routine.

I questioned what the point of this process was. Surely I should have been pumping more milk by now. Instead, all that happened was that I spent a good portion of my day peeing.

The first bottle would prove the easiest one to drink. With every refill, I wondered whether my stomach could physically contain this much fluid. It could, of course, but like Builder, I definitely noticed that I didn't want to drink any third-party liquids along the way. No more juice or coffee for me this week.

Although I tried to pump midday and before bed, I didn't notice any changes to my supply. Each time, I got only an ounce of milk out. Because I am impatient, I questioned what the point of this process was. Surely I should have been pumping more milk by now. Instead, all that happened was that I spent a good portion of my day peeing.

On Day 2, after having only fed Luna once in the night, I woke up with extremely hard boobs. They hadn't felt this full since the week after my milk first came in. Yet there I was, achy and ready to burst.

That morning, I drank my first bottle of water while feeding Luna. For the first time in months, I was excited about the prospect of pumping. I decided to wait a few hours before my first try, since I figured my ta-tas would need a little bit of time to refill.

I could see the breast milk quickly flowing into the bottle. Before I knew it, almost the entire thing was filled.

When the pump came out, I was astounded by how much milk was being released. Instead of little droplets here and there, there was a legitimate stream. I could see the breast milk quickly flowing into the bottle. Before I knew it, almost the entire thing was filled.

I was astonished. Just 24 hours before, filling the pump in just one session would've seemed like something out of a fairytale.

My day carried on as normal, with the addition of a remaining 76 ounces of H2O intake. I worked from home, I drank my water bottles, and I kept nursing Luna every three hours or so. Before bed, I decided to pump again. My boobs felt hard and full, despite breastfeeding all day.

Honestly, it was like something out of Harry Potter. For the second time in a day, almost the entire bottle was filled. Before this experiment, it would've taken me four days to pump the same amount of milk. Could this possibly go on?

It turns out that it could. On the third day, I woke up with full boobs yet again. They were so full that they actually hurt pretty badly, which I honestly won't complain about because I have been longing for this kind of supply. This was another work-from-home day, which meant that I could dedicate myself fully to drinking my water, nursing my baby, and pumping my boobies.

Honestly, it was like something out of Harry Potter.

Remarkably, I had another eight ounces of breast milk in the refrigerator by the end of the day. I was still peeing once or twice an hour, but I didn't even care. My ever-filling bladder was a sign of positive change.

In just three days (or two, if we don't count Day 1), I had accumulated a grand total of 16 ounces of breastmilk — enough to leave my daughter with a babysitter for approximately 16 hours if I wanted. I could take some me-time and find a temporary reprieve from the responsibilities and exhaustions of motherhood. At this rate, I'd be able to visit friends or go to a movie or have lunch in town by myself with very little effort involved at all.

I cannot express how thrilled it made me to see my daughter holding an eight-ounce bottle of breast milk. Mostly, it doesn't even seem real. This particular bottle was the product of two pumping sessions in the same frickin' day.

Knowing that I'll be able to step out of the house without worrying about whether Luna will have enough food is liberating beyond words.

Nursing and pumping are undoubtedly unique experiences that vary mother-to-mother, but for me, they've both become infinitely more enjoyable in the span of 72 hours. Knowing that I'll be able to step out of the house without worrying about whether Luna will have enough food is liberating beyond words.

Although there were times when I really didn't want to drink another damn bottle of water, the mild inconveniences along the way are honestly just that — mild. I'd much rather pee one or two dozen times a day than have to stay by my daughter's side 24/7. As much as I adore her, I just need a break sometimes. Now that break is within my grasp. Hell, multiple breaks are within my grasp.

More Like This
What Is RSV?
Experts Explain Whether It’s Safe For Your Baby To Sleep On Your Chest
How To Get Boogers Out Of A Baby's Nose
Can You Mix Breast Milk & Formula? Experts Weigh In