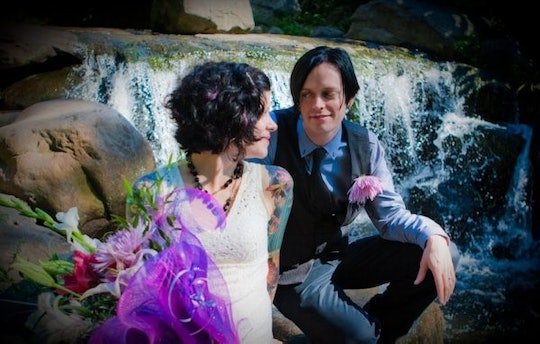 I Eloped While Pregnant, & I Wouldn't Have It Any Other Way

This year my husband and I will be celebrating 10 years of marriage, which sounds crazy to me, not because I have Peter Pan syndrome and can’t believe I’m old enough to have been married 10 years, but because I never intended to marry him in the first place. What’s even crazier is that I’m really glad I did — we eloped while pregnant.

We’d been together on and off for seven years, but when we decided we were serious about each other and wanted to settle down, marriage was not part of the conversation. We’d both been married before — both were brief, when we were very young: no kids, no property. They just hadn’t been the right match for either of us. For my part, I felt a deep sense of regret for having exchanged vows with someone and then leaving anyway, and I didn’t want to do that again. Johnny and I had been in love for seven years already, I reasoned. If our love was real, what difference could a piece of paper from the government make? Especially because at that time, marriage equality was not yet a thing. We had many friends who genuinely wanted to be married but could not be legally, and here we were, the second time around for each of us, taking what felt like a very precious right to some so casually.

We moved in together. We opened a joint bank account. We talked shyly about the family we knew we wanted to have. Within a few months, we were trying to conceive, and within a few months of that, I was pregnant. We talked about how we could celebrate the baby with our friends and loved ones. But marriage was still not on the table, until one very hot and sticky summer night. I was lying in bed, fully awake and frustrated by the heat. I was pregnant enough that the morning sickness had passed, but not so pregnant that I was used to the restless feeling in my legs and the sleeplessness that came from being unable to lie on my belly or on my side. I tossed and turned, twisting the sheets around me one moment and throwing them off me in a sweaty huff the next. Johnny turned to me, also wide awake, and asked me suddenly what our baby’s last name would be.

“Mine, right?” he asked. I was tired, hot, sweaty and now this? I became indignant. Why his last name and not mine? Or why not a hyphenated version, a combo, or something else entirely? Why did I have to do all the work of growing and carrying this child only to have him get all the credit by having her bear his last name?

It was not quite a shotgun wedding, but I was five months pregnant and we did it in secret.

He reminded me that my last name was not originally mine. It was my ex’s. I’d taken his name when we’d gotten married because I hated my maiden name so much I could not wait to be rid of it. I retorted that legally, it was my name. It had been my name for over a decade, and I’d built a successful career with it. And as someone who was adopted, I’d started out with a very different name than I was given as an adoptee, and I didn’t associate any particular name with any particular person other than me. But his point was valid. The more I thought about it, the more it didn’t make sense for our baby to have any part of my ex’s last name, especially if it bothered Johnny. But I didn’t want to have a different last name than my baby, either.

“Let’s get married,” I said five minutes later, “and I’ll change my name to yours.”

We planned our wedding hastily but thoughtfully. It was not quite a shotgun wedding, but I was five months pregnant and we did it in secret. Neither of us could see having a big, elaborate affair when it started out as a squabble over last names. And who would pay for a big, elaborate affair anyway? We didn’t have the money to spend on something like that, not with a baby on the way, and neither of us felt right asking our parents (who were skeptical at best about our relationship, since we’d already had several false starts) to fund wedding #2. We decided that if we were going to do this, it should be something meaningful to us. Something that expressed our love for each other and for the family we were about to start. We looked at each other, knowing this meant no parents, no crowds, no church or synagogue, no fuss, nothing. We were eloping. This was for us.

We didn’t fly to Vegas or get married in the middle of the night. We didn’t go to city hall. We were in love, and we were already both in love with our unborn baby, so we wanted some ceremony, some celebration. We did want a wedding, just one on our own terms. So we found an officiant. We wrote our own vows. We wrote our baby into the vows, acknowledging her presence there with us. We wrote a few lines about our desire for marriage equality and that we hoped that all people who wanted to would someday be able to do what we had decided was the right thing for us. We agreed to surprise each other at the wedding with lines of a poem or song that felt right for the moment. I bought a very pretty, sleeveless, white maternity dress and we selected our rings. One afternoon, we explored every quiet path of Prospect Park in Brooklyn until we found a secluded spot in front of a waterfall. This is it, this is the spot, we didn’t have to say to each other. We both just knew.

When we got our marriage certificate, it was time to select our witnesses. I chose my best friend. Johnny chose his sister. A common friend of ours was starting out as a professional photographer, and we asked her to join us as well to take pictures. We swore them all to secrecy. Then one Saturday morning at the end of September, we all met at the entrance to the park nearest our apartment.

It was perfect. The weather was gorgeous. The waterfall was picturesque and, tucked away as we were, you’d never have guessed we were in the middle of Brooklyn. The flowers Johnny picked for me were vibrant. Our friends looked stunning. We all stood together with the sound of the water behind us, and the officiant did her job beautifully. When it was our turn to read each other the lines we’d chosen, everyone wept, and when we kissed for the first time as spouses, I knew we had made the right decision, and that I’d just been the last to know.

When it was over, we took our friends out for brunch at our favorite bagel place. Then we got in a rental car and headed to Maine for a long weekend. When we got there, we bought two postcards: one for my parents, one for his. On them we scrawled: Guess what?!