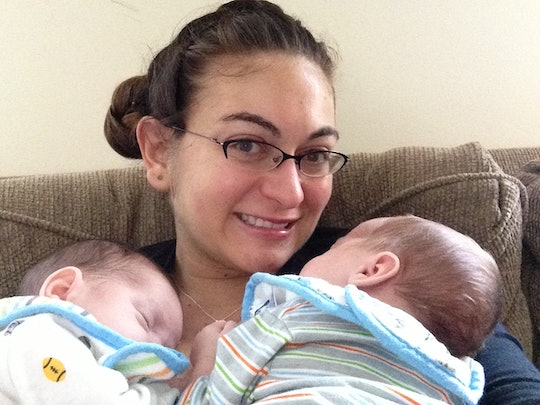 I Feel Like I Was Pressured Into Breastfeeding, & I Kinda Regret It

I have a major mom crush on Olivia Wilde. If you follow her on Instagram, then you know she loves posting photos of her son Otis and her newborn daughter Daisy, and that she's an outspoken advocate for breastfeeding. But even though Wilde finds that breastfeeding is what works for her and her family, she doesn't see it as something that should be forced upon parents.

"It should be a choice for everyone. I don’t like the idea of breastfeeding being forced on anyone or anyone feeling guilty,” she recently told PEOPLE. “[Breastfeeding] is not easy — it’s messy. Like 90% of the time you are soaked in milk. It is a difficult thing. But it is, personally for me, a great experience.”

With this declaration, Olivia Wilde made me love her even more than I already did. Breastfeeding my twin boys wasn't in my original plans before they were born, but once they arrived I felt so much pressure from doctors to breastfeed and pump that I went along with it, and I have lingering resentments from the experience.

I didn't have any interest in breastfeeding. My mom didn't breastfeed, nor did my aunt or any of my friends who had already had babies. I knew more and more women were doing it, and I was happy for them, but I didn't think breastfeeding twins was realistic, especially since I wouldn't have anyone at home with me while I was on maternity leave to help me get them latched for tandem nursing. Nursing them separately seemed like a one-way ticket to exhaustion. If each baby took 30 minutes to eat, and they had to eat every two hours, I would literally be spending half of my life breastfeeding. I didn't want to grow to resentful my own babies or feel like I was just a milk machine. Plus my husband wanted to be able to help with feedings, especially during the middle of the night.

I briefly considered trying to exclusively pump breastmilk for the twins, in large part because we would save a small fortune in formula costs that way, but I knew it would be hard to pull off. My original plan was to return to work after my twins were born, and since I worked as a courthouse clerk and routinely had papers to fax or needed to get judges' signatures in between grabbing a snack or running to the bathroom during lunch, I knew that trying to pump at work was going to be a challenge. Plus, all of my bosses were male, and seeing as how my supervisor already asked me for back rubs or wanted me to feel his biceps on the regular, I could only imagine how a request for a clean and quiet place to pump would go, even though according to a 2010 federal law, my workplace was required to provide one.

So formula it was going to be. My OB was on board with my decision (if he wasn't, he certainly kept his opinion to himself) but my boys ended up arriving quite a bit ahead of schedule at 33 weeks. After pushing for three long hours, the babies started to go into distress, so I had an emergency C-section and they were snatched away by specialists and taken into another room before I even saw them.

I was confused. I wasn't sure if my babies' lungs were developed enough to see them live through the night, and the nurse was asking me about breastfeeding? Did I look like I wanted to whip my boobs out right now?

After I was in recovery for a few hours, the nurses wheeled my hospital bed into the NICU so I could meet my sons. There I was, staples and stitches holding my lower half together, totally in shock that the tiny babies all covered in cords and machines were on the table before me instead of still in my belly. It was then that the nurse approached me. "Do you want to try breastfeeding?," she asked.

I was confused. I wasn't sure if my babies' lungs were developed enough to see them live through the night, and the nurse was asking me about breastfeeding? Did I look like I wanted to whip my boobs out right now? My face must have said it all, because she smiled at me, and went to get their doctor.

The NICU doctor on call explained that because my twins were born so prematurely, they would benefit from the antibodies in colostrum, the early breast milk that my breasts would start producing.

"I wasn't planning on breastfeeding, " I told the doctor. "Do I have to?"

"No," he replied, his eyes boring into mine. "But it could really help your babies." I was a brand new mom who had just gone through an unexpected early delivery and c-section, and now a doctor was essentially telling me that if I didn't breastfeed, I was failing as a parent. Of course I said yes.

For the next three weeks, I breastfed one twin and pumped every four hours to have a supply for bottles for both boys while they were in the NICU. The lactation consultant told me that pumping every four hours was the best way to build up my supply enough to be able to feed twins, so I stuck to that schedule fanatically, using my middle-of-the-night pumping sessions to call the NICU and check in on my boys.

At first, my progress was painfully slow. I remember being exhausted during that first night in the hospital, and wanting to do nothing more than sleep. Instead, I used a syringe to collect 9 sticky. orange-yellow drops of colostrum and shuffled downstairs to the NICU to hand-deliver it to the nurses caring for my boys. Within days my supply came in like a tsunami, and I was overflowing 8 oz bottles after 10 minutes of pumping.

My body was more than up to the challenge of feeding two babies at once. But I still hated every second of it.

As it turns out, my body was more than up to the challenge of feeding two babies at once. But I still hated every second of it. My back hurt because I never figured out how to get comfortable while using the pump, so I would hunch over, basically pouring my boobs into it. I was constantly thirsty, but I didn't want to leave the boys' side to go to the bathroom, so I wasn't drinking enough water. And because I was getting up in the middle of the night to pump, I wasn't getting the proper rest I needed to recover from my c-section.

When I breastfed my son in the NICU I hated trying to arrange the privacy screens they forced us to use. It was impossible to fit them in between the IV poles and monitors, and the rude father of the baby next to us would keep rocking his rocking chair into the metal of the privacy screen. If there weren't enough screens to go around, I had to leave my babies and pump in the nursing room down the hall, and I resented having to leave them. I just wanted to stay with them and feed them a bottle of formula instead.

In the end, my fears about feeling like a milk machine came true. I had just established a full milk supply for the boys and decided that I wouldn't be returning to work so I would be available to breastfeed them at home, when their doctors changed tactics once again and told me that this time, formula was what was best for them. The boys were getting released from the NICU, but since they were still so small, their team of doctors felt a special order weight gaining formula would be best for them, rather than a diet of breast milk. I was relieved to be rid of the pump, but I felt like I had been used.

Obviously, I did what I had to do for the sake of my babies' health, and I'll never regret that. If I had to do it all over again, I'd pump colostrum again for them in a heartbeat. But if I had known that their doctors were just going to put them on formula three weeks later anyway, I would have fought harder to avoid being pressure into breastfeeding. And I'll never judge another parent for making the decision not to breastfeed herself.