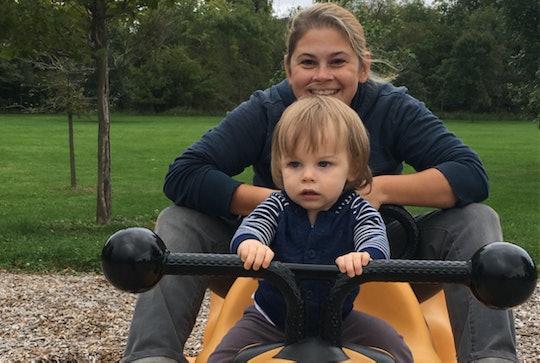 I Felt Forced To Formula Feed By My Mother-In-Law

When I was pregnant, I became aware of a few local breastfeeding groups and bigger, national support groups. I asked around about them. These groups of breastfeeding mothers and breastfeeding proponents were known for helping struggling new mothers with information and helpful tips, and, as I'd heard from other new moms, sometimes even bullying them a little bit. I'd heard the the breastfeeding groups were pretty severe in their belief that breastfeeding was the only way to properly feed a baby and while I didn't disagree, I was a little scared of that judgment. I was very open to breastfeeding and hoped I'd do it, but I wasn't completely opposed to formula. I'd been formula fed as a baby. My siblings were, too, and also my husband. It didn’t seem that any of us were experiencing drawbacks from it. Even so, I was expecting to find opposition to formula everywhere I turned. But that wasn’t my experience at all. In fact, what happened to me felt like just the opposite: I felt forced into formula feeding.

My milk didn’t come in immediately after my C-section, but none of the hospital staff made me feel like I needed to do more to feed my baby. I was offered formula every five minutes with no discernible judgment. Then my mother-in-law showed up with a strong and apparent disdain for nature’s way of feeding, and everything changed. I don't recall her comments verbatim, but from the very beginning she urged me to do the easiest thing for me, which in her mind, was formula feed.

Even though breastfeeding was hard for me, much more so emotionally than physically, I wasn't sold on her belief that I should give up and go straight to formula.

My mother-in-law didn’t seem to think I needed to feel pressured to breastfeed, but I was determined to attempt it. I'm guessing her feelings had a lot to do with her experience. She used formula and had healthy babies. It did seem like she was also slightly disturbed by the act, but it could have been as simple as that. I thought about all the benefits of breastfeeding. So when I started, I did so with a soundtrack of "breast is best" playing on repeat in my mind constantly. Every time my nipples burned, I heard it again: "Breast is best." Every time I wanted to sleep, there it was again: "Breast is best." Damn, I'd say to myself. Formula is readily available five blocks from here. It's easy and proven safe and a super viable option. "But it isn't the best," the devil on my left shoulder would yell out. "And who doesn't want to be the best?"

Well, superlatives are subjective and so are our points of view. My mother-in-law waltzed in and wanted to know why I didn’t circumcise my son and why we gave him the last name we did and why the hell I felt I needed to breastfeed. Aside from my husband’s stepmother, she was the only mom I had nearby — my mom was 250 miles away. So Every time my MIL questioned my actions, I felt violated. My own mother, no matter her faults, always let me make my own decisions. She let me be as fiercely independent as I was. I wasn't used to feeling heavily judged by a mother figure and it both hurt and angered me in equal degrees.

I never asked her about her feelings behind her anti-breastfeeding stance — I felt so judged and so angry that I never felt capable of discussing it with her. She'd already had her time to mother and she did it as she saw fit — it was my turn now. And the more she railed against the act, the more I tried to hold steady to it. Until the day I gave in and gave up.

I lasted a couple of months exclusively breastfeeding. But every single time I saw her, she brought it up, acting as if breastfeeding my son were a pointless and meaningless thing. We walked in her house one day, our baby’s cries audible from the driveway; he was starving. Flustered, I pulled opened the door and ran down the stairs to breastfeed. I was shocked and white with rage when I heard what she said to her son upstairs: “That’s what a bottle is for, you know. You prop it up on the back of the seat while you’re driving and they can just feed. You guys need to just bottle feed."

Breastfeeding was quite difficult for me. But I often wonder if my mother-in-law played into my idea that it was hard. Did her suggestions to "just give him a bottle" wiggle their way into my psyche? Was I unaware of some innate desire I had to please her?

What the hell was behind her attitude about it!? I asked myself every day. This was not ambivalence. Ambivalence is neutral, but my husband’s mother absolutely did not want me to breastfeed, which made absolutely no sense to me. I never asked her about her feelings behind her anti-breastfeeding stance — I felt so judged and so angry that I never felt capable of discussing it with her. She'd already had her time to mother and she did it as she saw fit — it was my turn now. And the more she railed against the act, the more I tried to hold steady to it. Until the day I gave in and gave up and started to formula feed. I was just so tired — of my nipples stinging and leaking and of pumping and of fighting and of everything.

Ultimately, it was the right decision for me. I'd been trying to hold myself to a standard that didn’t work for me. Breastfeeding was quite difficult for me. But I often wonder if my mother-in-law played into my idea that it was hard. Did her suggestions to "just give him a bottle" wiggle their way into my psyche? Was I unaware of some innate desire I had to please her?

Though it seems like 10 years have passed between then and now, only two have. I've disconnected from the experience to a large extent. I’m glad I have. If I’m being honest, I still want to know what the hell her stark opposition represented. I want to ask her, to open up a conversation about women and health and allowance. But it feels like the time has passed. I talked about it plenty with my husband, but he always just shrugged his shoulders saying, "I really think she's just trying to be supportive."

I wonder if I would have made good on my year goal had she not been in the picture. Had I not felt like I was fighting her or myself every step of the way, and just allowed myself to experience breastfeeding outside of seeing it as an argument, maybe I could have breastfed my baby.

But that’s something I won't ever know. What I do know is how to be supportive of other mothers in the future, especially when it comes to my friends and my family. I can be supportive of how they feed and of how it’s none of my business what they choose to do with their children. Someday, I hope to be a pillar of strength and support for a daughter-in-law of my own, should that be the case. I'll listen to her hopes for feeding her child, validate her fears, and above all, honor her choices.

I had my baby, so I can let her have hers.