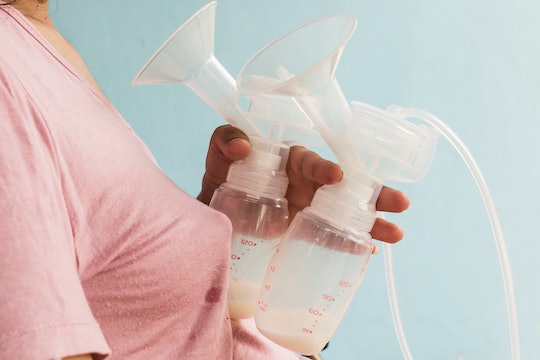 What To Do If Your Milk Doesn't Come In

The days after having a baby can be some of the strangest days of your life. You're recovering from childbirth, which is the most daunting thing that will ever happen to you, you've become mom to a brand new baby, and now your breasts are filling with milk. Twilight Zone stuff, right? But what happens when your milk doesn't come in? Does it affect your chances at breastfeeding? Does it mean there is something wrong with your breasts?

According to The Bump, most moms' milk comes in within six days of delivery, but if that doesn't happen, it doesn't mean anything's wrong. The Bump noted that colostrum, the first thing your baby has to eat as they wait for your milk to come in, is fine for your baby to have for more than a few days. Although you may have to supplement while waiting on your milk, it doesn't necessarily mean anything is wrong or that breastfeeding won't work for you.

But some moms may never experience their milk coming in. The Academy of Breastfeeding Medicine noted on its blog that sometimes there's a reason for "lactation failure." Although many assume that any mother is capable of breastfeeding, it is possible that your milk may not come in because the "machinery" in your body needed to produce and distribute milk doesn't work correctly or because the signals needed to make breast milk happen are either absent or not working correctly.

So what does that mean for you? It means reaching out to a doctor to figure out what's wrong. According to Baby Center, there could be a few reasons why your milk hasn't come in, like a stressful delivery, diabetes, and fragments of the placenta leftover in your body (this can interfere with prolactin, the hormone that makes milk). The Academy of Breastfeeding Medicine suggested that some of these issues can be fixed with drugs to help boost prolactin, but often, physicians are not able to find a satisfactory solution.

All breastfeeding hope is not lost, however. According to Kelly Mom, some moms have reported having their milk come in weeks after delivery and have found help with lactation consultants. You'll want to schedule a private consultation so your lactation consultant can determine if there's a hormonal or physical issue with your milk production and how to fix it, whether it's more skin to skin contact, more frequent nursing, or even galactagogues. Kelly Mom suggested that, often, a delayed onset of lactation can really be that your milk has come in, just not in the volume expected because of something interfering with the transfer of milk, like flat or inverted nipples.

In short? If your milk doesn't come in within a few days of delivery, you'll want to get some help to figure out what the issue is. It may not be anything huge, but it probably needs a professional opinion to make effective solutions.

More Like This
Abbot's Formula-Producing Plant Can Reopen In As Early As 2 Weeks — Now What?
Can You Help Your Baby’s Hair Grow?
Baby Not Napping At Day Care? These Reasons May Be Why
Here’s What You Need To Know About That Viral 1960s Baby Formula “Recipe”