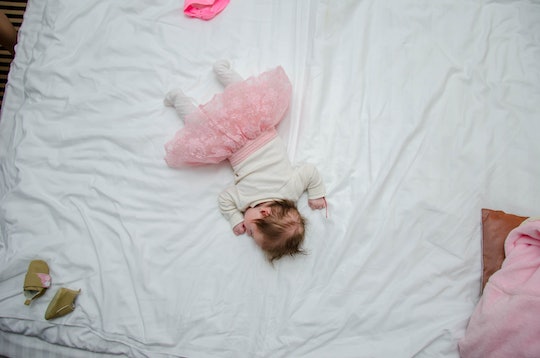 Photo by Maierean Andrei from Pexels

Like all parents-to-be, I basically earned an uncredited bachelor's degree in mom-dom while I was pregnant. I’ve always prided myself on being a pretty good student. In high school, I was the girl who color-coded my notes, made hundreds of flash cards to prepare for the SATs, and followed directions. Naturally, over the course of my pregnancy, I did all the necessary research about health and safety — I read every book imaginable, perused dozens of websites, and attended the childcare classes at our hospital. The topic that seemed to come up time and again was sleep. There were so many infant safe sleep guidelines to read and follow that it seemed nearly impossible to string together a livable sleep strategy. Sleep near your baby — but not with your baby! Place them on their backs — but hope they don't roll over. Breastfeed — but encourage self-soothing. Sleep is not as straightforward as the fact sheet makes it look.

When my daughter was born, I thought I was prepared with all of the products and information needed in order to engender "safe sleep." The American Academy of Pediatrics recommends that newborns be placed flat on their backs to sleep on a firm, flat surface, located in the parents’ room but separate from the parental sleep space, without any extra bedding. It's an inflexible prescription, even if safe sleep guidelines have reduced SIDS dramatically since the '90s.

But there was one thing I wasn’t prepared for, and that was my baby herself — the most unpredictable variable in any sleep strategy.

So, with that in mind, my husband and I had purchased a (very expensive) bassinet, complete with a flat, firm mattress. We knew not to put extra blankets or pillows in the bassinet, and that her stuffed animals would have to wait a few months to become snuggle buddies. I had been an A+ student so far, and this was one test I was prepared to ace.

But there was one thing I wasn’t prepared for, and that was my baby herself — the most unpredictable variable in any sleep strategy. After all, babies are not robots, and for as much as we all wish there were some kind of instruction manual, the rulebook can sometimes be thrown out the window when you factor in that actual tiny human.

A few weeks into my daughter’s life, we discovered that she had reflux. Consequently, sleeping flat on her back had become very uncomfortable for her. She’d fall asleep in my arms after a feeding, and I’d place her gently in the bassinet, only to have her start gurgling and coughing minutes later. The result was awful sleep for all three of us, and considering newborns need upwards of 16 hours of sleep a day, something had to give.

Ironically enough, my daughter was sleeping perfectly during the day; her reflux only occurred at night. This is, of course, because during the day, she was sleeping in her Pack 'n Play "napper" — a cushioned bassinet that’s egg-shaped rather than completely flat. It allowed her head to be slightly elevated, eliminating her painful reflux noises. The question seemed to be pretty obvious: Can’t we just let her sleep in the Pack 'n Play at night, too?

When we asked our pediatrician, you’d think we suggested letting our baby take up slacklining. “She needs to be flat on her back, on a flat surface,” our doctor told us firmly. “That device is fine for napping during the day, but at night she should be in her bassinet.” We were sent home with a prescription for baby Zantac and instructions to feed her pumped milk thickened with rice cereal. And things got a little better, but she still continued to make dragon noises all night long.

I was initially shocked — was she proposing that I ignore my doctor’s instructions and go entirely rogue? Yes, yes she was.

It became a vicious cycle of sleep deprivation for all of us, and as anyone who has ever hung out with a newborn knows, overtired babies are the actual worst. I was frustrated because we were following all the directions, we were doing everything “right,” but it just wasn’t working. And for someone who is used to heeding instructions and being rewarded with a gold star or a good grade, this outcome was even more maddening.

After several weeks of horrific sleep and a baby who was constantly stuck in a tired state, I found myself complaining to one of my close friends. I thought she’d nod and tell me I was doing the right thing by listening to our doctor, but she laughed and said: “Girl, do whatever you need to do to get sleep. Find what works for the three of you and make that the new rule.”

I was initially shocked — was she proposing that I ignore my doctor’s instructions and go entirely rogue? Yes, yes she was. And the more I let this idea sink in, the more I started to embrace it. “Do what you need to do” became my new mantra.

That night, I shoved a folded-up blanket underneath my baby’s mattress in the bassinet, creating a wedge that allowed her head to be slightly higher than the rest of her body. I made sure that the blanket didn’t creep up into the bassinet itself, and placed her gently inside when she was asleep. I climbed into bed and stared at the ceiling, waiting for her dragon chirping to begin. There was silence.

I ended up checking on her at least 20 times within that our hour, not because of her noises this time, but because of the lack of noise. She was sound asleep, and eventually I was, too.

As time went on, this became our new routine. And, I’m not going to lie, sometimes she sleeps in her Pack-and-Play at night. There’s a part of me that feels guilty for going against my doctor’s instructions, but at the same time, my baby was in pain when she was sleeping flat on her back. And what kind of a mom would I be if I forced her to experience discomfort night after night? If you dig deep enough into the annals of the American Academy of Pediatrics, you can actually find a piece of language I haven't heard a doctor recite:

Health care providers are encouraged to have open and nonjudgmental conversations with families about their sleep practices. Individual medical conditions may warrant that a health care provider recommend otherwise after weighing the relative risks and benefits.

To translate that into laymans terms, the science can give us solid recommendations, but those don't take into account every factor impacting a family. Sometimes — deep breath — the safe sleep guidelines are untenable.

In the few weeks that I’ve been a parent, I’ve discovered that it’s all a series of trial and error. There are guidelines and checkpoints to help along the way, but, ultimately, every baby is different, and every family is unique. We, the parents of the world, must do what we need to do in order to keep our babies comfortable, happy, and safe. And achieving those things is the biggest reward of all — no grades or gold stars needed.

More Like This
New Infant Safe Sleep Guidelines From The AAP Discourage Bed-Sharing
Should You Swaddle Your Baby In The Summer? Here’s How To Dress Them
AAP Now Recommends Mothers Breastfeed For 2 Years Or More In New Guidelines
Ginger Zee Had A Perfect Response After A Troll Asked Her "Who's Raising Your Kids?"