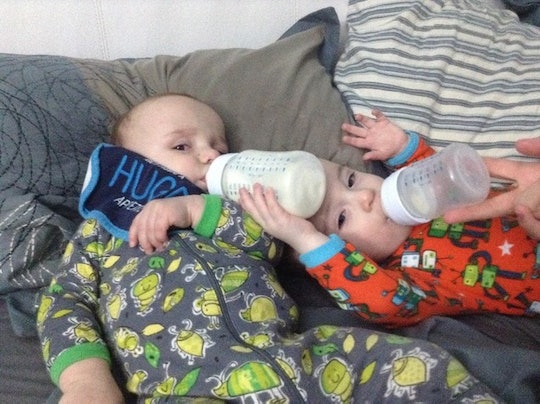 I Formula Fed, & Yes, It Was By Choice

When I first announced that I was pregnant with twins, I expected a fair amount of unsolicited opinions from people about my body. I braced myself for comments about my baby bump, like whether it was too big or too small, or if I was waddling when I walked. But what I wasn't prepared for was all the attention my boobs got during my pregnancy. Not the glances from people admiring my ever-growing rack (although that happened, too), but the judgment and lectures I received when I told people that I wasn't planning on breastfeeding.

Instead of respecting my decision, I was told all the reasons why "breast is best." Instead of listening when I explained how breastfeeding twins would require an extra set of helping hands that I wouldn't have around, and that nursing them both would take up almost all of my time, some breastfeeding moms told me I was being selfish. But after many pregnant woman tears and a lot of self-doubt, I decided to stick to my plans to formula feed, and I'm so glad I did.

My plans took a slight detour when my boys were born prematurely. For the first few weeks of their lives I pumped and breastfed at their doctor's urging in order to help their weakened immune systems get stronger. While I was happy to see my baby boys get healthier, I hated every second of it. I didn't feel like a mom during those weeks. I felt like a dairy cow whose worth was determined based on how much milk she could produce. As soon as they were released from the NICU with a prescription for a special weight gaining formula, I was back on Team Formula, and there's not a doubt in my mind that I'm a better mom for it.

When I was pregnant, I was totally feeling myself with all of the changes that happened to my body. I felt like Ariana Grande in the "Side to Side" video. I rocked every single tight maternity top I could get my hands on and started wearing maternity jeans while my regular jeans still fit, just because I was so excited to say buh-bye to buttons for a while.

You know when you come home after being away on vacation and you recognize all the walls and furniture as your own, but everything just looks and feels a bit off? That's how my body felt to me.

However, I wasn't prepared for the ways my body would look different after delivery. Sure, I had seen photos of other women's postpartum bodies, but I was lucky enough to not get any stretch marks during pregnancy, which I assumed meant that my stomach and all my other body parts would magically return to their pre-baby size and locations. I knew that it wouldn't be as simple as saying "Reparo!" into the mirror, but I didn't expect to look in my full length mirror after giving birth and see a Salvador Dalí where my reflection used to be.

You know when you come home after being away on vacation and you recognize all the walls and furniture as your own, but everything just looks and feels a bit off? That's how my body felt to me. Those first few weeks after the boys were born, when I was pumping and breastfeeding because the doctors had pressured me to do so, this feeling of not recognizing myself intensified, and I felt myself slipping into a depression.

Formula feeding was a huge help. It let me reclaim my body as my own. Sure, I wasn't getting the calorie burning boost that can come with breastfeeding so many breastfeeding moms love to talk about. But my body was wholly mine again. I didn't feel like I could learn to love or even like my new body while it was breastfeeding, because I didn't know what my postpartum body really looked like while I was still producing milk.

When I started formula feeding full-time, as I had wanted to all along, I finally saw the final outcome being pregnant had on my body. Not having to worry that my body would change even more in ways I didn't recognize allowed me to start appreciating my new form. And my self-confidence in my appearance gave me more self-confidence in tending to my babies. I was happier, more upbeat, and more likely to spend time singing songs or down on the floor playing with them, instead of listlessly scrolling though my phone Googling things like, "how big can boobs get before they burst?"

While I was pregnant, I put my own needs last. I adjusted my diet and activity level in order to always do what was best for the babies, even when it meant forgoing my addiction to cinnamon dolce lattes and giving up my love of distance running. I was fine with making those sacrifices for my children,because they're small in the grand scheme of things, but I'll admit that I did miss feeling in charge of my own body. Formula feeding helped me regain that sense of autonomy.

New moms often talk about how they feel like they lose their own sense of identity after having a baby but I think formula feeding helped me remember who I was outside of being a mom, and my kids are better off because of it. Because I formula fed, I didn't have to worry about avoiding spicy foods or eating anything new for fear that it would impact my boys' sensitive stomachs. And I was able to head out for much-needed stress-reducing workouts, without worrying that I had to get back in time for a feeding or that I would leak all over myself while running. I was able to go back to doing things that felt like who I was before I became a mom, because I chose to bottle feed my twins formula. I don't think this makes me selfish. I think it makes me smart. I was able to better figure out who I was as a parent, and that's truly one of the best things you can do for your kids.

Having a feeding schedule and a chart of how often the boys were eating and when made me feel like an awesome mom.

Some women are naturally laid-back. They let their babies nurse on demand, never worrying about the exact amount of breastmilk the baby is getting. I'm not one of those women. I work best with a schedule, a plan, a Fitbit — something that tells me precisely how I'm doing and when. I didn't want to try and fake being something that I'm not, especially as a brand-new mom when there were giant changes going on in my life.

For me, having a feeding schedule and a chart of how often the boys were eating and when made me feel like an awesome mom. I knew my babies were being fed, and knowing that I was nailing at least one part of this parenting thing helped me believe I could handle the rest, especially in those early months whenever everything was new and unfamiliar.

I'm not against breastfeeding by any means. If it works for a parent, I think they should do it, whenever and wherever they need to. But I am against the idea that moms who feed their babies formula aren't doing just as good of a job as breastfeeding moms.

Formula feeding is what worked best for me. It's what made it possible for me to be the most engaged, happy, and confident mom I possibly could be for my kids. At the end of the day, my babies were well cared for and fed. And that's not despite the fact that they were fed formula — it's because of it.