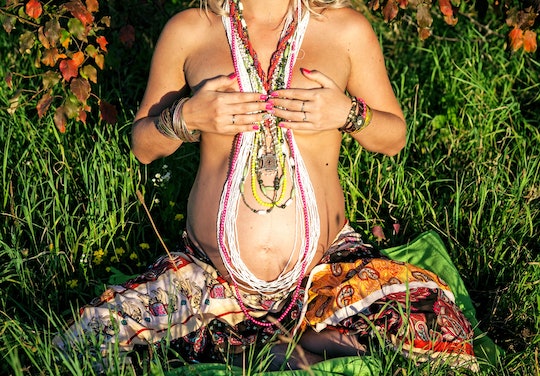 I Freebirthed In Costa Rica, & (Barely) Lived To Tell The Tale

Did you know that there is a secret society of prepper parents who move to Costa Rica to birth a baby, in a sort of pre-apocalyptic first-strike? For many of these parents, their reasons are political — Costa Rica has no military and states proudly that education and environmental conservation come first. Others may do it because they believe the U.S. medical establishment has hijacked birth, and they think birthing in Costa Rica, whether at home or in a hospital, will be safer for both mom and baby. Then there are those who simply like the rainforest backdrop and figure they could survive there comfortably when the West falls. Their reasons are as unique as they are, and a quick Google search for “having a baby in Costa Rica” seems to indicate that these birth vacations are only growing in popularity.

A few years ago, my husband, 3-year-old daughter, cat, and I moved to Costa Rica to birth our upcoming bundle of fun, but I wasn’t preparing for doomsday. Personally, I just wanted to escape the rat race, stop shaving my armpits, and eat mangoes every day. I moved to Costa Rica because I loved the country. But, Costa Rica, unfortunately, did not love me back.

My fetus was about the size of cantaloupe that sunny winter day in Florida when I approached my husband with a proposition I would eventually come to regret.

We bought our plane tickets, paid a few hundred dollars for something akin to a cat visa, and sold everything we owned, apart from what we could fit into four suitcases.

“Hey babe, did you know that you can rent a gorgeous house in Costa Rica for, like, $300 per month?”

It took me two days to convince my husband that it would be absolutely irresponsible of us not to birth our new baby in the mountains of Costa Rica. So we bought our plane tickets, paid a few hundred dollars for something akin to a cat visa, and sold everything we owned, apart from what we could fit into four suitcases.

Four weeks later, I had an incredibly kickass freebirth deep in the mountains of Costa Rica.

My husband wore our 3-year-old in a carrier while she watched, wide-eyed, as her baby sister was born.

Freebirthing, if you aren’t familiar, is when a woman gives birth without the presence of a doctor or a midwife. After four hours of laboring on the toilet, I stood up and pushed my baby’s gargantuan head into my hands. My husband wore our 3-year-old in a carrier while she watched, wide-eyed, as her baby sister was born. I was the Goddess, my husband was the God, and our children were Light incarnate.

My new baby girl nursed right away. Sure, maybe it felt like I was nursing a piranha rather than a human. I had nursed my older daughter for three years without an issue, though, so I was confident we’d soon figure it out.

But then, a measly two days postpartum, my entire family and I (including our helpless newborn) contracted Giardiasis, a filthy, disgusting gastrointestinal infection caused by the protozoan parasite, Giardia lamblia.

Back and forth I went, from painful nursing to painful stomach to painful crotch.

And so before my precious vagina had even healed back together, I was jumping out of bed in a frantic rush for the toilet every 10 minutes so that I wouldn’t sh*t myself. Back and forth I went, from painful nursing to painful stomach to painful crotch. I began to subconsciously associate nursing with pain, and emotionally, I felt myself pushing my baby girl away.

She looked at me with eyes straight out of a Precious Moments illustration and said, 'Mama, I want to go home to Florida.'

My 3-year-old wasn’t faring so well, either. She was experiencing painful intestinal cramps, diarrhea, and vomiting. I have this memory of her in the shower after a particularly messy puke-session, crying until she finally laid down and fell asleep on the shower floor. I wrapped her in a towel and brought her to bed, and when I laid her down, she looked at me with eyes straight out of a Precious Moments illustration and said, “Mama, I want to go home to Florida.”

By this point, we had realized that the Giardia infection likely came from brushing our teeth with contaminated tap water. Even our new baby was sick — we believe it happened when we bathed her in the shower. Medication didn’t work. The American expats we spoke with told us it was just traveler’s diarrhea, and our gut flora simply needed to “adapt.” However, when speaking to the locals, we discovered that “everyone gets sick when the rainy season arrives.” Apparently, the rains flooded the fields and the runoff contaminated the tap water… with cow feces.

We had been in Costa Rica for almost six months, and we had been sick for five of them.

Then, one day, a water line broke in the village and our water stopped working. We waited outside with pots and pans, praying for rain that never came. On the third day, finally, the water came back on. We knew that we’d need to boil it before using it for cooking and brushing our teeth. We were so careful! But somehow, we got sick again.

At this point, I admit that I may have started feeling just a tad bit homesick for Florida. We had been in Costa Rica for almost six months, and we had been sick for five of them.

But what could we do? We had sold everything we owned, packed up our lives, and moved to another country. Hell, I was blogging about it to the world! What would they think of me if I admitted that it wasn’t working out? If I admitted that I wished we had never moved to Costa Rica in the first place? No. I couldn’t. My pride just wouldn’t allow it.

Then my cat got eaten by a pack of frat-dogs. And so I finally said what I should have said months ago, “F*ck this shit.”

In two weeks, we had sold all of our stuff and boarded a plane back to Florida. We had no money and nowhere to live. But we had each other, we hadn’t puked in days, and the smile on my 3-year-old’s face as she told me how happy she was to be back in Florida? Worth it.

I just don’t know if I’d do it like that again.

Friends and family have asked me if I would still choose to freebirth in the mountains of Costa Rica, if I could do it all over again. Had we stayed in Florida, my daughter’s birth would have been different, of course, but we wouldn’t have gotten sick. The truth is that I just don’t know if I’d do it like that again. Don’t get me wrong… the experience obviously made us all stronger and taught us many lessons. My daughter is a dual-citizen of both the U.S. and Costa Rica, which is pretty darn cool. And her beautiful birth allowed me to fully come to know the strength that all women have inside them.

But it wasn’t where I birthed her that made her birth amazing. It wasn’t who was or wasn’t present that brought out The Goddess inside me. It was the simple yet immensely complex act of choosing to bring another human being into the world, of choosing to say, “Yes. I will help you find your way.” Making that choice, opening up the most vulnerable part of my being to the immense love and pain that every mother feels as she makes her way through this journey… that’s what made my daughter’s birth incredible.

And I certainly could have done that without the Giardia.