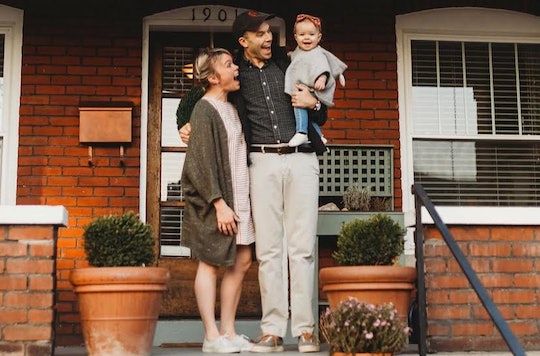 I Got Pregnant Without A Period After Baby Number 1

Several months ago, led by the sudden belief that I was unexpectedly pregnant, I headed to my laptop and began to type in "pregnant w—." The search results I was specifically seeking popped up first: "pregnant without a period," immediately followed by "pregnant wedding dress." Clearly, I was not the only woman looking for information on experiencing something outside the generally assumed order of operations. In theory, I knew I could get pregnant postpartum without having a period, but 14 months in, I just didn't really expect it. I was still managing a baby! Surely no other babies would have the audacity to arrive unannounced. A quick cut to the plot twist: my uterus was gosh darn full of audacity; I was pregnant, and I had never had a period postpartum.

I had exclusively breastfed my daughter, Melby, since birth, never seeing any signs of a period returning. Several of my girlfriends with similarly aged babies had started their periods again even though they were also breastfeeding, which is simply to say, clearly there is no exact science to the postpartum experience — especially with so many varied elements at play.

By 13 months, Melby was usually only breastfeeding twice a day — once upon wake-up and once before bed. Though I strived for a nap schedule from the get-go, I never worried too much about feeding her on a schedule, so while that twice-a-day tended to be the norm, I would also nurse her for comfort, or occasionally (can I get an amen?) just for a moment of silence or stillness. I was certainly still breastfeeding, but not with the regularity or consistency of a new mother, who chooses to *exclusively* breastfeed.

Here is where the Google search really started to fill in the gaps for me. Fueling my previous lack of knowledge was the old adage, "You can't get pregnant while breastfeeding." I knew this wasn't explicitly true, but it did sort of linger somewhere in the back of my mind. The more complete truth: lactational amenorrhea is the suppression of a woman's menstrual cycle due to the release of the breastfeeding hormone, prolactin. However, a woman must be breastfeeding exclusively, day and night, without using bottles, pumps, or pacifiers, for breastfeeding to most effectively suppress her period and, thus, fertility.

Traditional attachment parenting practices — bed-sharing, regular skin-to-skin contact, comfort nursing, nursing on command, babywearing, and so on — can extend lactational amenorrhea, but there is a roughly 2-6 percent chance of conception under the lactational amenorrhea method (LAM) during the first six months of a baby's life, according to Planned Parenthood (versus the 1 percent chance using hormonal birth control and 15 percent chance using condoms) — this time frame being determined as the assumed portion of baby's life before introducing solids. Basically after baby starts eating solids, the chances of a woman's period returning increase greatly; that intense initial period of nonstop physical closeness and frequent suckling are what cause the level of hormone surge that most effectively suppresses menstruation.

In my case, my period still did not return, but the subsequent information I discovered shocked me. Texas Tech University states that hormonal contraceptives can actually lessen breastmilk production, which means less prolactin, which means a greater potential of getting knocked up, womp. While many providers suggest a low-hormone option that doesn't include the estrogen that affects lactation, this is not always a consideration and can affect milk supply and thus fertility.

Now comes my big confession: I was actually on birth control. And while I was on the estrogen-free birth control, much like my very casual feelings about feeding Melby, I also felt casual about taking said birth control, which I know is a huge faux pas. I told myself I'd take it as soon as I got up, but most mornings that didn't quite happen and sometimes it didn't happen at all. I knew I could get pregnant, somehow. Clearly I wasn't dead set again having another baby, or I would have tried harder.

When I tracked back and did the math, I realized I had gotten pregnant basically within days of ending breastfeeding.

One day, right on the cusp of 14 months, Melby joyfully yelled "BOOBS!" as she pulled at the neck of my shirt, in front of a woman, who was giving us a tour of her lovely preschool. I was not mortified in the least. Surely this woman had heard much more colorful comments from children than this moment contained, but I realized in that moment, I was done breastfeeding. I had always sort of fancied myself a mother, who might breastfeed indefinitely, that likely I'd like my own children decide when to stop, but once the moment arrived, I felt enough — what it was exactly is impossible to describe — in that exact flicker of time, to know I was done. I felt like I could find other ways to comfort her; I didn't want her to remember being weaned; I wasn't interested in her yelling, "Boobs!" at me for an indefinite amount of future; I was finished. The next day, I didn't nurse her in the morning; I didn't nurse her that night. To my surprise, she didn't protest in the slightest, and that was that.

I had this small, triumphant moment, in which I celebrated my body being entirely my own again. I loved breastfeeding; I love being close to my daughter, but there was something thrilling about no one relying on my particular body for survival. Shortly after reclaiming my body, I bought some light-colored leggings, a brazen move for a traditionalist like myself, who almost always wears black, and an even more bold move for an also accident-prone person like myself, who wears a majority of food on her clothing. I explicitly started putting pantyliners in when I wore them, not wanting to ruin my wild choice of fitness wear (which, let's be real, is actually just everyday wear) with my surely imminently arriving period.

A month later, I found out I was pregnant.

Upon calling to meet with my midwife, the nurses asked their always first pregnancy question, "When was the first day of your last period?" to which I replied, "December 22... 2016." Another month later, after an ultrasound and some blood tests, I learned I was 11 weeks along. When I tracked back and did the math, I realized I had gotten pregnant basically within days of ending breastfeeding. I had a small bittersweet laugh, realizing my body had been "mine" again for about zero hours total.

Along with all the complex and varied elements that go into the science of postpartum fertility and menstruation is the further confusion that a woman can have a period (or several periods) postpartum but not ovulate, or, in my case, a woman can ovulate before actually having a period. I assume I would have started my period after that cycle of ovulation had my husband and I not been so heartily honoring the end of breastfeeding at just the right time.

I like to think this little person was just eager to join us, and so, we are equally eager to meet them.

At now 15 weeks, I am still slightly in shock, but also adjusting, finally almost happily, to the idea of what my husband called our "two puppies." I am in awe that women go as long as they do without knowing they're pregnant. Just like the postpartum experience, surely pregnancy is different for everyone, but by 6 weeks in, when I found I was expecting, I was so terribly exhausted, headachy, crabby, and offended by foods I normally love that I finally realized something was up. I did that fated Google search, grabbed a pregnancy test at the drugstore down the street, and here we are.

So far, for me, what they say about the second time around is true. I don't have an app on my phone telling my what size obscure fruit or baked good my baby currently is — when someone asks how far along I am, I have to think about it a minute instead of counting the literal days, and I feel generally much more relaxed about my ability to grow and eject an entire human being. I am terrified about the requisite things — lack of sleep, not enough hands, a now even more endless barrage of diapers — but I'm also really looking forward to watching my daughter love her baby brother or sister. What they say about breastfeeding and fertility is not true: you can get pregnant while you're breastfeeding (or 45 seconds after stopping), and you can get pregnant without ever having a period.

I like to think this little person was just eager to join us, and so, we are equally eager to meet them. There are many things to discount in the world of pregnancy and parenting — so many unsolicited opinions, suggestions, and unverified but super assuredly stated "truths" that come up, but even without having experienced yet, this one piece of advice offered from a sweet friend as I grappled with the surprise of this baby I know is true, "Love is exponential. It defies logic. It just keeps growing."

And just as I am now, I know that that love will, too.