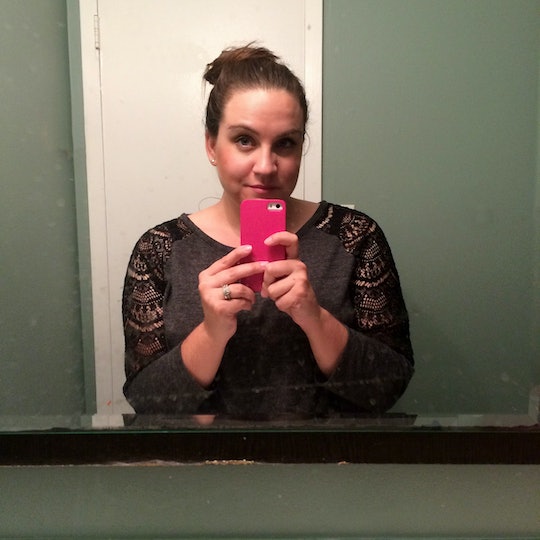 There are lots of women out there who want to maintain their pre-baby appearance after their kids are born. More power to them. I, however, am not one of them. I spend most of my days in pajamas, have a pretty extensive collection of leggings and yoga pants, and I rock a lot of ponytails. In truth, sometimes I feel like maybe I should be a little more in touch with my appearance, or that I should try a little harder. So when I was challenged to try a "mirror fast" — that is, taking down the mirrors in my house for a set period of time — I figured it couldn't possibly be that difficult. I mean, it's not like I have an extensive beauty routine anymore these days that I'd rely on a mirror for.

But as a mom of both a son and a daughter, I do think a lot about what I want my kids to know about things like body positivity and unrealistic beauty standards. I want to model being comfortable with however you happen to look but honestly, I struggle a lot with actually doing it. After almost 30 years of exposure to beauty stereotypes — and just as many years spent criticizing my own appearance because of them — trying to turn off the part of my brain that is always judging my looks or fretting about being too this or not enough that is definitely not an easy task.

The idea of taking down the mirrors in my home for a week really intrigued me, because I had a feeling the number of times I check myself out in the mirror on a regular basis was probably much higher than I'd ever expect it to be. It seems like the type of thing you don't even realize you're doing — it's just what happens when you see a reflective surface. But in addition to just gaining some awareness about how much looking in the mirror affects my life, I was hoping to feel some kind of change in terms of my own self-esteem. Would mirror fasting help me be less critical of my own appearance? Or would I just end up worrying even more about it, the way going on a diet suddenly makes you think about food all the time?

I decided to give it a try, and so I took the mirrors in the bathroom and bedrooms off the walls, and vowed to leave them off for seven days. And I hoped that by the end of the week I'd have learned something valuable — and that it wouldn't be too frustrating.

Mirror, Mirror, Not On The Wall

One thing I noticed almost immediately was how much looking at myself in the mirror had become an important part of all my visits to the bathroom. It's just what would happen while I'd wash my hands, brush my teeth, or slather on all the creams and serums every night that are supposed to help me wake up with supermodel skin. So not doing that was kind of weird.

The other thing that became pretty apparent on day one was how difficult it was in a technical sense to actually do all that stuff without looking in a mirror. Trying to pin up my hair or curl it felt a million times more complex without being able to see what I was doing, and other things — eyeliner, for example, or brow grooming — were just not going to happen without a mirror. The first morning I tried to get ready for the day without a mirror? It really made me uncomfortable. How was I supposed to know if I looked OK? What if I thought my hair looked good, but it really looked terrible? How would I know if my skin is too shiny? On a scale of one to 10, how cute do I look?!

It was becoming clear that I was actually much more vain that I thought I was — and that going out into the world without the reassurance of my own mirrored reflection (even if I so often criticized that reflection) was going to be very difficult.

There's still a baseline of acceptability that I need to feel I've reached everyday. Maybe I don't look amazing, but I have to know that I at least look OK. Taking the mirrors away took away the chance to get that reassurance, and that was jarring.

Not having mirrors in my house wasn't just difficult at the beginning, it actually remained difficult throughout the week. I soon realized that I was becoming more aware of all the mirrors around me when I'd leave my house. Checking myself out in the car, for example, was totally going against the point of the mirror fast — it was acceptable only as a technicality — but it gave me a surprising sense of reassurance to finally be able to look at myself. Going into this experiment, I thought that the time I spent in the mirror was just about me being hypercritical of myself, but I was starting to realize that mirror-checking is addictive for other reasons too.

Even if I often looked in the mirror and thought, "ugh," thanks to my seemingly-permanent, kid-induced dark circles, or uneven skin, or whatever other complaint I could find about my face, there's still a baseline of acceptability that I need to feel I've reached everyday. Maybe I don't look amazing, but I have to know that I at least look OK. Taking the mirrors away took away the chance to get that reassurance, and that was jarring. It also forced me to realize why that mattered — mostly, the idea that I could be going out in public not looking nice enough felt embarrassing. But why should it be? Chances are no one else would even notice the difference enough to judge me — isn't everyone already too preoccupied about their own looks? And, let's be honest, the type of person who actually looks at strangers and judges the way they look is probably not a person whose opinions I would consider worthwhile anyway.

By not always looking in the mirror, I was forced to evaluate my appearance by how I thought I looked, how I felt, and I realized that that version of myself is one most often I like more than the one I create when I spend time deconstructing my appearance in the mirror.

Despite the multiple ways in which this experiment was proving to be super difficult, there were still some important advantages. As the week progressed, I gained far more self-awareness — and, by extension, some self-acceptance, too. By not always looking in the mirror, I was forced to evaluate my appearance by how I thought I looked, how I felt, and I realized that that version of myself is one most often I like more than the one I create when I spend time deconstructing my appearance in the mirror. After all, there is usually a direct correlation between how much time I spend in front of the mirror and how many things I decide I don't like.

Even though it seemed reasonable to me when I did it to myself, the thought of either one of my kids standing there thinking negative things about themselves in the mirror makes me cringe. And yet, I know that day will come, because it comes for everyone.

I realized just how often I used to find myself staring at my face in a mirror, mentally picking out all the little imperfections that need “fixing.” And sometimes, my sister and I would have in-depth discussions about all the procedures we’d get done if we suddenly became as rich as Beyoncé (how messed up is that?). It’s so ingrained in me that I don’t usually realize how deep it goes, but it’s also totally self-inflicted. It seemed so strange once I thought about it that I would be so harsh to myself. After all, I'd never say (or even think) that stuff about other people, so why am I doing it to myself?

Was I Mirror-Free For Good?

I was hoping that by the end of the week, I would have magically come to terms with my self-judgment. But honestly, I have to say that it was pretty relieving to get my mirrors back. I realized very clearly during this experiment that mirrors (or more specifically, the act of checking myself out in them) is almost like a grown-up security blanket — a way to reassure me that I'm OK and socially acceptable. But, of course, not everything that's reassuring is actually good for you, and my need to feel like I look good enough to fit in or that I look good enough to not be judged by others is kind of a never-ending spiral of self-loathing. Even though it seemed reasonable to me when I did it to myself, the thought of either one of my kids standing there thinking negative things about themselves in the mirror makes me cringe. And yet, I know that day will come, because it comes for everyone.

But in a purely practical sense, trying to avoid mirrors is kind of ridiculous. The reality is that the world is full of reflective surfaces, and sometimes they’re just downright necessary. And, in a way, the idea of going to such drastic measures to try to be less vain seems just as unreasonable as being super into my own appearance. Everything in moderation, maybe?

Ultimately, taking a break from my own reflection for a while was super eye-opening. And it was a reminder that, well, no one cares about my supposed flaws as much as I do. I went into this experiment thinking that it would force me to reconcile my ideas about my own appearance, that maybe it would show me that it didn't matter. It didn't end up showing me that at all — I'm still as conflicted as ever — but it did make me realize how complex our views about how we look can be. And that perhaps self-acceptance isn't something you either have or don't have, but something you practice continuously and always try to be mindful of, even if you still have plenty of moments where you look in the mirror and groan.

I also realized that, most likely, modeling self-acceptance for your kids also isn't a yes or no thing. Most likely it's just about trying a little harder, and letting them know that, just like everyone else in the world, that mom is a mostly awesome, flawed, constantly evolving human being, and that they can be awesome and flawed and evolving too, and that's more than good enough.