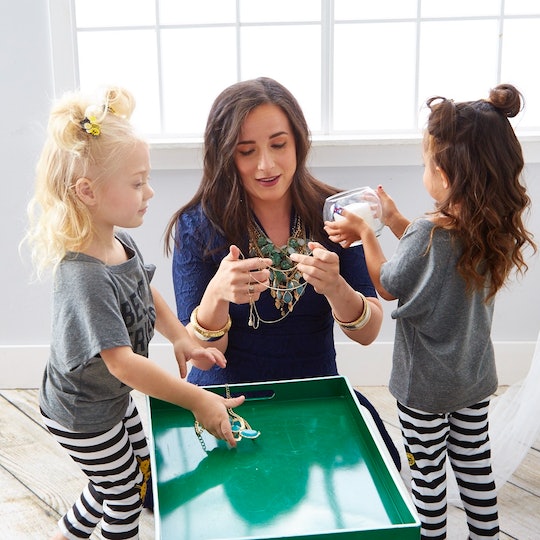 I Had 2 Instagram Stars Style Me & Here's What I Learned

When it comes to fashion, I'm more of a looker than a doer. I flip through the fashion magazine during an airport layover, offer my unwanted opinion during red carpet events, and spend way too much time in fitting rooms. But when it comes to executing my day-to-day attire, I take a simple and safe approach. (Think ripped jeans, a cute top, and a statement shoe.) I know I need work, but don't know where to start. So when I was given the opportunity to have two Instagram stars style me, I jumped on the chance. Even if the stars happened to be 3-year-old besties.

Last month, I had the honor of meeting Ava Foley and Everleigh Soutas — the 3-year-old Instagram stars with a sense of style that many adults would envy. (Just scroll through their Instagram page ForEverandForAva, and you'll see what I'm talking about.) In fact, their style game is so strong that brands have been jumping at the chance to work with them, be it to model the latest line or create an entire collection. Most recently, the duo teamed up with zulily, an online retailer, to curate five shoppable events based on their looks.

I was lucky enough to join the girls on set and thought it would be a great opportunity to get some style tips from the pros. Because if anyone is going to school me on style, it's going to be two fashion-forward toddlers with a social media following of 428,000 users and counting.

During my visit to zulily, I was given the opportunity to act as a model for the company. An awesome experience in and of itself. But I figured, "Hey, if I'm gonna be on the set with two pint-sized style icons, I need their two cents."

In a dream world, the girls would have dressed me in the bedazzled leotards and tutus that they often don themselves. But given time and the girls' busy schedule, I asked if they'd be willing to critique my outfits (which were carefully selected by the zulily team) and pick out a few additional accessories for me to wear. Since I need all the help I could get in the style department, I was game. And the girls were too.

Outfit 1: A Little Too Much Black

My first outfit of the day was inspired by the girls' City Cool collection, which was perfect for a five-year Manhattan resident like myself. This outfit captured the typical NYC look of all black everything, but had a playful aspect to it in the form of a mantra sweatshirt. I paired my sweatshirt, which read "I Am Beautiful," with a high-low skirt and some white converse. It was a little playful, a little sophisticated, and very stylish. Or so I thought.

I met up with the girls, who were donning more adorable versions of my outfit. Instead of a fitted black skirt, they paired their sweatshirts with a flowing white tutu and a leather jacket — the perfect blend of cute and chic. Since we were wearing almost the same thing, I assumed they would praise my ensemble. But when I asked if they liked my outfit, the response was less than flattering.

"No," the tiny voices screamed in unison. (Hey, you have to give them points for honesty.) I could have left it at that and sulked my way through the photo shoot, but instead I tried to dig a little deeper and find out what they hated about my outfit.

Ava simply said "I don't like it," while Everleigh nodded her head in agreement and added "it's boring." Everleigh did have a point — my outfit was a little bland, especially when compared to theirs. And, to be honest, I felt a little boring in it. Maybe it's because it was an outfit I'd worn to work may times or perhaps it's because it lacked a certain pizazz. Either way, I didn't feel excited about the look, and clearly the girls didn't either. In attempts to salvage my look, the girls let me borrow their spare pair of bedazzled sunglasses. It definitely made the outfit more fun, but because I lacked other playful elements, it felt a little off.

Outfit 2: Simple, But Not Quite Stunning

After the girls gave my City Cool look a sad face emoji, the on-set stylists wanted to try me in something that was a little lighter and a lot more playful. And, lucky for me, she pulled out an outfit that perfectly suits my springtime style — a blue and white striped dress, booties, and a few bangles. I felt happier and more confident, even though it was still a simple look. And, given that Ava had told me her favorite color was blue, I thought this look would win the girls over.

When I went to meet up with the girls, they didn't have an instant reaction to the new outfit. (To be fair, they had just been given Goldfish and their attention was rightfully placed on the food in front of them.) But after asking what they thought, I was greeted with a "pretty" and "I like it." Not exactly the enthusiasm I was going for, but a step up from the disgusted reactions my all black ensemble received earlier. Still, I was determined to wow these mini fashionistas, and I had one more outfit to do it.

For my last look of the day, the on-set stylist opted for something a little more formal and outside of my comfort zone — a form fitting peplum dress. I tend to hide my shape in baggier clothes, so wearing something that showed off every curve was a little intimidating. Add in the fact that kids can be brutally honest at times, and I was nervous to see what Ava and Everleigh had to say.

As soon as the girls saw me in my dress, they oohed and aahed. Ava even told me that I looked like a princess, which is the highest praise you can get from a 3-year-old girl. They did, however, have one note — I needed more sparkle. This didn't come as a total shock, considering both girls had told me the day before how much they love diamonds. So I asked them to help me pick out some jewelry to make my look pop.

They sort of went to town on the jewelry box, but I wasn't mad about it. Though it put a little extra weight on my neck, the extra jewelry gave me an odd confident boost. I looked like a million bucks and, as a result, I felt the same way.

During my day with Ava and Everleigh, I went through a bit of a fashion evolution. I started off with something simple and similar to what I wear every day, which had me feeling less than fabulous. I ended the day with an ensemble and accessories that were outside of my comfort zone, which oddly enough gave me a slight confidence boost. I took a fashion risk (with some encouragement from two style stars) and it paid off.

I realize that isn't always the case; there have been times where I tried something new with my wardrobe and it was a hardcore #fashionfail, and I know there will be plenty more in the future. But, to paraphrase Babe Ruth, I shouldn't let the fear of a fashion fail hold me back.

By mixing new fits, fabrics, and items into those that I'm comfortable with, I can not only expand my clothing choices but potentially boost my confidence on a daily basis. Because if you look good, you feel good. And to think it took two 3-year-olds to teach me that lesson.