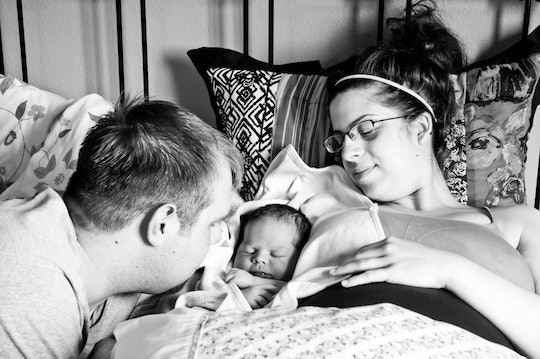 It was never our plan for me to give birth at home. Let alone give birth at home unassisted. Although my husband and I tend to sway more alternatively when it comes to healthcare, a solo birth felt too alternative for us. We had connected with a midwife for my prenatal care and with the onset of labor, we planned to meet her at an out of hospital birthing center. That was the plan, that was what we wanted. And honestly, our plan seemed very reasonable. After all, my first labor had been a whopping 40 hours long, so a quick second labor definitely wasn't on my radar. I joked with friends that if my second labor was in the 24-hour range, I would be ecstatic! I found joy in thinking that baby number two's labor would potentially be half as long as my first.

So, how, with all those well-laid plans did I end up with an accidental home birth? Well, I'll tell you. I was due with my little boy on August 10. Late on the night of August 8, I sat at the kitchen table sewing and surging a pile of burp cloths I'd cut out in preparation for my new baby. When I finished, I decided to make a jersey knit headband for myself. I popped it on when it was done, snapped a selfie, and texted my headband-modeling photo to my sister. That was at about midnight. I'd obviously found a bit of late-night energy, but decided I should head to bed and get some rest. I knew that sooner or later labor would be on its way, but I had no clue just how soon.

I laid in bed, attempting to get comfortable and drift off to sleep; a constant struggle when you're nine months pregnant. I felt a few cramps, but wrote them off as being normal for the end of pregnancy. But, a gush of water as I lay tryin to sleep signaled that my water had broke. I nudged my husband, who sleepily acknowledged me. He nodded in agreement when I said I was going to try and go back to sleep. I knew how taxing labor would be and I desperately wanted to begin labor number two well-rested.

She calmly looked at me and said, "Then you don't have to go. We'll just ask your midwife to come here instead." In that moment, I felt so much relief. I don't think I fully realized that I was signing up for a home birth, but I did know that I felt safe and less stressed.

My plans for rest were thrown out the window when contractions kicked in. They began shortly after my water broke, and they came with a vengeance and frequency. I texted my midwife, doula, and birth photographer — I just knew baby was on the way. And they all agreed: it was go time. My husband loaded the car while I jumped in the shower. My doula and birth photographer carpooled to our home. We all planned to caravan to the birth center to meet my midwife there. Little did we know, we'd never get the chance to leave.

About an hour and a half after my water broke, I was out of the shower and getting dressed. I made it into a sports bra and then situated myself on the toilet. My doula came into the bathroom and I burst into tears, "I can't ride in the car!" I exclaimed, "That means I'll have 30+ contractions while sitting in the car ... and ... I can't stop pooping!"

She calmly looked at me and said, "Then you don't have to go. We'll just ask your midwife to come here instead." In that moment, I felt so much relief. I don't think I fully realized that I was signing up for a home birth, but I did know that I felt safe and less stressed. My husband unloaded our birth supplies from the car while my labor amped up big time. I eventually made my way off of the toilet and labored while leaning on the bathroom counter. My contractions came on fast and hard. My husband was on the phone with our midwife and as she listened to my birthing vocalizations she prepared my husband for what was coming next: baby.

I breathed a sigh of relief as he settled into my arms. So much could have gone wrong.

In the next few minutes, my 10-pound, 4-ounce son was born with the helping hands of my husband and doula while my midwife gave directions over the phone. The shock of an unassisted home birth didn't hit me until much later. In the moment, it felt extremely natural. My body was telling me to push, so I did. It didn't matter where I was or who I was with. My baby was ready to be born and all I needed to do was follow my body's lead as my little one entered the world.

I pulled my son to my chest and gave him the opportunity to nurse moments after he was born. We dried him off and covered us both with towels and blankets. I breathed a sigh of relief as he settled into my arms. So much could have gone wrong. But it didn't. Without intervention, and with the speed of his arrival, I never thought twice about the fact that we were flying solo without a medical professional present. Afterward, I thanked the Lord with everything in me for blessing us with a safe delivery. It was a miracle.

Days and weeks later, as I recounted our birth story to family and friends, that's when I felt the shock truly hit me. Seeing the fear and surprise on their faces allowed what happened to resonate with me. But even so, our story is unique and special, one I believe happened just how it was meant to. Over the years that shock has turned to sentimental joy. I love our story.

Would I plan an accidental home birth again? Absolutely not; it was an accident! I fully believe in the wisdom and expertise of having a licensed care provider, whether obstetrician or midwife, attend birth. Thankfully, there were no major complications with my home birth, but any birth has a certain amount of unknown and risk and having an expert there can alleviate that concern.

But, here's the million dollar question, would I plan a home birth again? Absolutely. I loved birthing at home. I felt safe and secure. I felt at peace in my own space. It was amazing not having to pack up and leave after delivery. In fact, we stayed home for an entire week after baby's birth so I could rest and he could quietly transition to life outside of the womb.

That's what is so wonderful about home births ... they're homey. Even though I don't consider myself a homebody, I love being home. Home is comfortable and an environment full of love. It's a place I'm in control of and a place I can organize however I see fit. Home is where my favorite family memories begin, so, what better place to welcome a baby? Even though my second baby's birth happened at home on accident, I so enjoyed the experience that I planned my third birth at home. But that's a story for another day.

More Like This
Ashley Graham On The “Fun, Organized Chaos” Of Raising Twins
These Stepmother's Day Instagram Captions Are Straight From The Heart
These Baby Boy Names That Start With "B" Are The Best
The 21 Most Popular Baby Names Of 2021 In The U.S.