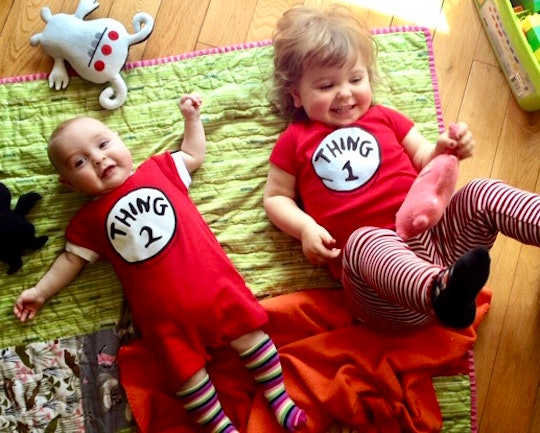 I Had "Irish Twins" & It's Perfect Now

I’m a late bloomer, always have been. I didn’t settle down with my partner until I was 36, so the decision to have children was one we made quickly. Everything happened in rapid succession and our babymaking years came and went almost in the blink of an eye with back-to-back babies — Irish twins, as they call it.

At 36, I didn’t feel like I had time to deliberate. I was already at an advanced maternal age, which seemed ridiculous to me at the time because I knew I had lots more growing up to do and didn’t think of myself at an advanced age for anything. But the pressure to get our family started was real, so we got busy. Fortunately, I got pregnant right away. As soon as the first one was born, I started thinking about the next one. I was 37 when she was born, and my maternal age was marching steadily on. My health care providers said risk increased significantly when I turned 40, so if I was going to have another one, there was no time like the present. My period returned when the baby was seven months old. We started talking about another baby in earnest when she was eight months old and before she was 10 months old, I was pregnant again. “Irish twins!” people exclaimed. I had no idea what they meant, but I heard it so often that I learned quickly.

Irish twins seems like an awfully offensive term to me, but I heard it constantly throughout my second pregnancy and into my second daughter’s infancy. Technically — if you can get technical about a slang and derogatory term — Irish twins are siblings born less than a year apart. So my daughters don't qualify, but that didn’t stop the peanut gallery. The most irritating thing about being in full-on reproductive mode for years without a break was the endless stream of unsolicited advice. With my first pregnancy, people exclaimed I was so enormous I looked like I would pop and asked if I was sure I "only had one in there."

They told me I was definitely not carrying a girl because I was carrying high, or that the nausea I felt all the time meant it was undoubtedly a boy. They told me when to sleep, what to eat, what shoes I should wear, what cosmetics and chemicals I must avoid, all the products I would need, and on and on and on. With my second pregnancy, it got much worse. I had all those comments and more. "Whoa, again? Weren’t you just pregnant? This one was an accident, right? Irish twins, huh? Or did you actually plan it this way?"

Yes. We actually planned it this way. Not that it’s any of your business anyway.

Since I was not getting any younger, the sooner we had our second baby the better.

In addition to considering the risk of advanced maternal age, we thought long and hard about the child spacing that would work best for us. Most articles and books I read suggested that ideal spacing is conception at 18 to 24 months after giving birth. There were pros to waiting, like letting my body heal and being able to do extended breastfeeding. Also, being able to enjoy the baby, engage with her, get her into a routine, get her sleeping through the night, maybe even eating and walking and talking before having to start it all over again.

Some people advised us to wait, saying it’s too hard to have two under 2, that two in diapers is more laundry than any Manhattan family could reasonably handle, that we would be so tired from sleepless nights that it would drive us crazy. Others said we should definitely not wait, that it might feel harder at first but that if our kids were close in age, the work would get dramatically easier over time instead of dragging out the baby years, and they’d grow up to be very close. Ultimately, I felt that since I was not getting any younger, the sooner we had our second baby the better, and we’d deal with whatever fallout around nursing or diapering or sleeplessness came our way.

The irony of it all is that none of our careful planning mattered in the way I thought it would. The driving force behind my determination to conceive a second time as soon as possible was the desire to avoid having a special needs child, yet a special needs child is exactly what we got. But her neurological disorder not only had nothing to do with my advanced maternal age or my geriatric eggs, it also had no real effect on how we parent other than to serve as a reminder that careful planning, when it comes to anything related to pregnancy, birth, and parenthood, is often pointless. Babies come when they are ready to come and when they do, they come with their own personality and their own set of characteristics that have little to do with what their parents have in mind. My daughters’ timelines and plans rarely coincide with mine. Especially in the first few years, we just had to abandon any real strategic planning and just go with the chaotic flow. In short, we made it all up as we went.

We went through a lot of diapers that first year. We barely slept. My body could not handle tandem nursing, so I weaned my toddler before either of us wanted to so that I could focus on feeding the baby. For a year or more, bedtime was stressful, time-consuming, all-encompassing. We thought we’d be in it forever and that feeling made it very easy to decide we were done making babies. Two was plenty.

Another year in and it wasn’t much easier. The diapers got bigger and grosser. Someone was always puking or pooping on someone or something, someone always seemed to have a runny nose or pink eye or coxsackie, someone was always crying because we were out of Big Bird cookies or because we left her favorite toy at the playground. It felt like we slept less. We complained incessantly about having two babies; our excuse for being late or canceling anything was always we have two under 2! No one ever questioned this, instead nodding gravely, and certainly questioning our sanity. By this point I was in my fourth year of being pregnant or nursing or both, and there was only so much more I could take.

But then we had two under 3, which was a turning point because they were both weaned. I had my body back! No more night nursing! We transitioned them both into beds in their own room, and suddenly we had our bedroom back, too. Then we began eating at the table as a family. Most of the time all we could manage to make was toast or oatmeal or plain pasta, but we ate it together. And then came potty training. As soon as our older daughter met a milestone or mastered a new skill — like being fully toilet trained — her sister wanted to do it, too. We had a built-in role model to convince inspire her to do everything. Our firstborn was and is a leader who loves to teach, and our second daughter learns best from watching others. She adores her big sister and in her has the perfect mentor.

Then we had two under 4, and suddenly things felt a lot more manageable. We got rid of the changing table and replaced it with bookshelves. Their room looked more and more like a children’s bedroom and less and less like a nursery. We gave all the diaper bags away, the strollers, the baby toys, the plastic plates and sippy cups. I felt my ovaries dry up as I looked at my two preschoolers with their shoes and their barrettes and their backpacks. Our babies really weren’t babies anymore!

Today, they’re as thick as thieves — just as everyone predicted they would be.

By the time we had two under 5, we were rested enough to be able to look back on our decision and say without question that we’d made the right choice for us. Nowadays, our older girl has the patience to read to her sister at bedtime when I don’t. She teaches her every game she learns, and she leads by example when it comes to how she brushes her teeth, eats her vegetables, does her homework, and clears her place after dinner.

Today, they’re as thick as thieves — just as everyone predicted they would be. They will even occasionally wake each other up on Saturday mornings because they want to play together, which means we get to sleep in until 7 a.m.! And when a weekend afternoon with no plans rolls around, they can keep each other busy for hours imagining, inventing, dressing, building, squabbling, laughing. When that happens, we lie on the couch with a cup of coffee and a book or work on a puzzle. That feels like a luxury that, had we waited, might still be a year or more off in the future and I don’t think we’d have been able to hang onto our sanity that long.

It was a happy accident that it all worked out the way it did, and we wouldn’t have it any other way.