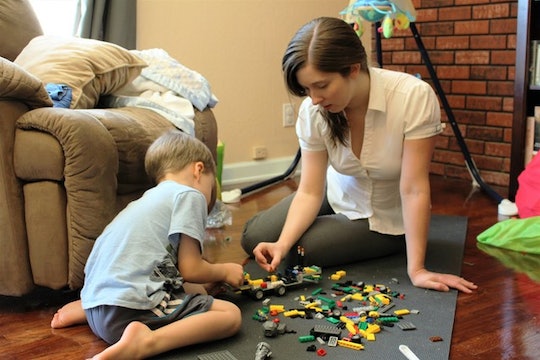 I Had Kids Before Starting My Career & It Changed Everything

As my college graduation date grew closer people would often ask me what I planned on doing after school. I had the unique pleasure of nodding towards my protruding stomach and claiming impending motherhood as my highest priority and obvious next step. Sometimes I'd talk about grad school later or mention working in journalism later, but the truth was I wasn’t sure exactly what I wanted my career path to look like. It’s part of the reason why I chose to have kids before starting my career — because I didn’t really have any clue what I wanted from my career yet.

I knew I wanted to have kids, and since I was already married, in a stable, happy relationship, and on the verge of graduation, I decided to have kids young. It turned out to be one of the best decisions I’ve ever made, not just for my personal life, but also for my career. Becoming a young mother helped give me the focus I was so desperately lacking as a new college graduate, totally unsure of what path to take. Early motherhood thrust me into a world where I couldn’t afford to be wishy-washy about what I wanted. I had a child who was looking up to me for guidance. I was now in charge of showing my kid — and eventually, kids — how to go after the things they wanted in this world.

Having the responsibility of modeling a passionate life for my child and teaching him what it meant to go after your dreams helped me laser in on my career path in a way that would have taken me years of soul-searching otherwise.

Having a kid so early on in my 20s turned the stereotype of the young mother whose life is "ruined" by baby totally on its head — because the birth of my son was probably the very best thing that could have happened.

I also found that I was in a good position to work slowly towards building up my career while my kids were little, honing the skills I'd eventually need when I wanted to enter the job market at full-force. When many of my peers will be slowing down to figure out the best balance for their families, I'll be primed and ready to ramp up my career without worrying over things like daycare and the need for abundant sick leave. I'll have already weathered those parenting storms and my career will be able to take on a more central role in my life.

Though it’s not harmful to have kids later in life, there are undoubtedly career perks to having kids young. According to author and career advisor Penelope Trunk, getting pregnant by 25 may actually be the best way to have a high-powered career later in life. It allows more time for advancement, and it's the career path of many successful leaders. Madeleine Albright, Hillary Clinton, Ruth Bader Ginsburg, and Sandra Day O’Connor all had their children in their 20s and early 30s, and built their careers once their children had grown.

Although not everyone is in the position to decide to get married and have a kid by 25 (not to mention, many wouldn’t want to anyway), it did offer me a particular advantage in my career path. Having a kid so early on in my 20s turned the stereotype of the young mother whose life is "ruined" by baby totally on its head — because the birth of my son was probably the very best thing that could have happened.

My kids have not only given me objective advantages like the ability to build my career over time, but they have also given me an increased sense of determination, focus and flexibility. Having kids before I started my career didn’t squelch my ambitions — their arrivals only added fuel to my fire. I feel like I have a clear view of what I want my career path to look like, and now, as a mother, I know how to prioritize my time to make it happen. Frankly, I wouldn't want it any other way.