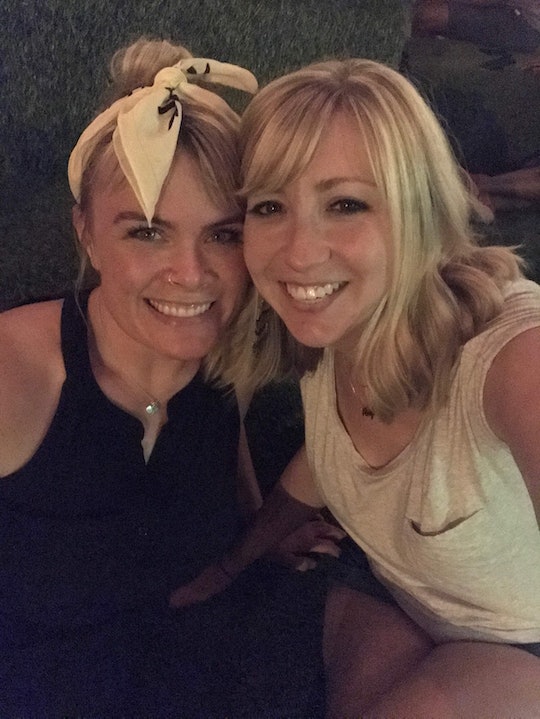 When I invited my best mom friend and her girls to come over for a playdate the next day and she only responded, "Sure," I knew something was up. Usually our text exchanges go on way too long, filled with humor, appeals for advice or support, pictures of our kids doing adorable or decidedly not adorable things, and occasional plans to purportedly pop out to the grocery store but then actually skip on over to Mexico. Her response was way too succinct and unemotional, and, while I have a tendency to read way too far into text messages, I know her well enough to know something was weird. Over 24 hours later, I'd barely heard from her, and when I finally solicited an acknowledgment that something was not OK, it began: our first mom-friend fight.

Amy and I have been friends about a year and a half now, which feels ridiculous to say, because she's one of those people I met and immediately loved, so it feels like we've known each other not some paltry number of years but more like a lifetime. We do all the things together. We go to yoga and bootcamp together; we, on rare baby-free nights, go out and drink maybe one too many beers; we scrape together weird dinners and eat as one big family with our husbands and cumulative soon-to-be four girls; we have constant playdates; we channel our inner eighth graders and buy maybe not-so-accidental matching jumpsuits and best friend bracelets; we can be less than glamorous in front of each other; and we talk a lot.

The fight itself was maybe quite ridiculous, but having it felt monumental.

So when we weren't talking, or when the talking felt strained, for even a mere day, I knew something was amiss.

The fight itself was maybe quite ridiculous, but having it felt monumental. We'd gone through our honeymoon period — the period of knowing no wrong, of only sunshine and adoration and gratitude — and it wasn't that we hadn't had our small share of awkwardness; we had.

Sometimes words got bent out of context, sometimes we were just really stinking tired, sometimes we needed reminding that even the best of relationships occasionally need an extra bit of finesse. But this was the first time I felt like things would be OK but I wasn't exactly how.

With that dramatic amount of lead in, I will disclose the details to the actually very undramatic fight: I had been talking about moving to California, because of my husband's potential job change, when Amy's mood noticeably shifted. Truthfully, I have talked about moving to California, as a person who comes from California, the entire time I've known her, to the point that it's become a running joke for her to ask, "Oh are you from California??" because, while I was a California baby for the first 30 years of my life, I live in Kentucky now, and even after five years, I still dream daily of living back in the land of mountains, liberal agendas, endless sunshine, and, most importantly, my entire family.

We recently bought our first house in Kentucky, and so, it seemed, we were settling in, at least for the foreseeable future. I think everyone breathed a sigh of relief; while this isn't my dream city, it felt good to dig in my heels, to decide to stay grounded for a bit instead of wistfully casting my glance back in the direction of the Rockies every other minute.

I want to spend the Fourth of July watching the fireworks on the beach from lawn chairs in my parents' street, just like when we were kids. I want their help. (I need their help.)

And yet, as life would have it, shortly after we moved in, a job opportunity presented itself on the West Coast right around the same time I unintentionally, but (now) joyfully became pregnant with our second child. The latter development made the distance from my family suddenly feel almost impossible. I want my babies to grow up knowing my parents/ siblings/ nieces and nephews — and not just on FaceTime.

I want to spend the Fourth of July watching the fireworks on the beach from lawn chairs in my parents' street, just like when we were kids. I want their help. (I need their help.) I want my mom's fresh maple pecan scones on a very regular basis. And yet California is so expensive; we just bought a house; we have a life here; we could barely afford to rent a two-bedroom condo there; the cross-country move with so much stuff and so many babies seems daunting...

I started dithering and dithering, excited, panicked, rushed with a furious stream of ideas and worries and hopes. And, as I do most things that cross my mind, I shared them all with my friend. After one-and-a-half years of also basically daily threatening and longing to move to California — a state far removed from the ability to have regular playdates or wear matching outfits to yoga — I should have known that dragging Amy along in my processing was unkind.

Not that I think she would be anything but supportive and understanding, albeit sad to lose me in close proximity, should we actually move; I know she has my best interests at heart. But the cyclical, endless conversation about leaving, especially when it had seemingly been put on pause with the purchase of our first home in Louisville, certainly had to take its toll.

And it did. She said something cursory in response to my endless circles of thought. I asked for a playdate and got that terse, "Sure," in response, and then 24 of the most uncomfortable hours of our friendship passed by.

It's not that I didn't know. I think, if we're honest with ourselves and even mildly attuned to others, we always kind of have an inkling of what has gone wrong, but I think, for a moment, I just wanted to push that knowledge aside. I wanted to anguish, to get unconditional support, but to also be missed, to process externally, to immediately be transported to California, to be right, really, no matter what I did.

I finally addressed it. She was pretty forthright and basically said she had her own things going on that day, felt overwhelmed by all that I was saying and didn't quite know how to be supportive; that if we wanted to move, we should move.

And then, I came unhinged.

I felt dismissed and embarrassed. Part of me just felt tremendously betrayed that we could talk about our nipples or baby poop or fights with our husband but this seemed like it was off the table. Part of me resented that she didn't say something immediately if I was out of line. To think that I was soldiering on feeling like I was safely sharing thoughts, when she really mostly wished I wouldn't drag her through it personally, felt embarrassing. I demanded not that she be supportive of everything I said or did, but be honest about her reaction to it.

I hadn't taken into consideration that, while I was unloading on her, she continued on with her own life, full of babies and feelings and challenges.

I felt angry and ashamed and, honestly, hysterical. We kept our argument to text messages — surely the least-effective form of communication, but one we'd agreed when we first met was the only permissible means of reaching out to anyone except immediate family, especially when some baby is always napping or trying to nap.

I stood in the kitchen, clutching my phone, heaving the sort of ugly, hysterical tears that are surely reserved only for a pregnant woman in the throes of their first fight with their best friend on the 900th day of a winter she never wanted. I certainly didn't think this was ending our friendship, but I felt so uniquely raw, uncomfortable, and unable to be honest or have perspective with myself or her — something that really has not yet happened in our relationship.

In retrospect, I was really just fighting with myself. A day earlier, I, too, had noticed something was wrong and was not that immediately forthright, emotionally attuned person I demanded she be for me. I hadn't taken into consideration that, while I was unloading on her, she continued on with her own life, full of babies and feelings and challenges. Because what was actually happening on my end is that I was flooded with hope and fear and nerves and questions, compounded with feeling pretty darn bad in my own body from this pregnancy, and I didn't know where to put any of it, so I put it in the safest space I'd carved out for myself, recently, one that bore a striking resemblance to my friend, Amy.

The whole thing resolved quickly. I acknowledged that being pulled along on my rollercoaster of possibilities was surely a lot for her, especially when it impacted her in the huge way of relocating her best friend 2,000 miles away, that I had been projecting all my feelings of insecurity and fear onto her and our relationship, that maybe I was just being a total jerk. She acknowledged that she could have been more direct or supportive, that we could talk about anything but this particular topic did feel particularly unsettling for many reasons, that she just had things going on in her own life.

And then she said the best thing, "Just because you're pissed at me doesn't mean we're not friends."

And I think, in some sort of messed up way, that is what I'd been looking for all along — reassurance that whether I stayed or moved, whether we were getting along or not, maybe even in good times and in bad, in sickness and in health, we would still be friends. She followed that up by an equally amazing thing, "Do you want some monster cookies and brownies?" to which I replied that I definitely still had Girl Scout cookies around, but, still, obviously, yes, I wanted cookies and brownies.

She brought treats over, we chatted, everything was fine.

I know that doesn't seem like much of a fight, not too big of a deal, but the first time you experience awkwardness with someone you love, instead of just sharing with them all the other awkwardnesses that unfold on the daily, it feels huge. And yet, moving through it I think is one of the most powerful things you can do in a relationship. Breaking things down a little makes space to build them back up stronger. I would much rather have a friend, who can tell me when she's upset with me, and vice versa, than just another person to pretend with on the daily. After all, motherhood is real and challenging and beautiful and occasionally very ugly, and I feel like the strongest bonds as friends we can have are ones that mimic that array of qualities, as well.

A day or so later, she asked, "We're OK, right?" and I said, "Of course" (along with many apologies for my misdirected hysteria). And then, she said, "As far as I'm concerned, we're forever friends, and I'll come visit you in California if I have to."

My first fight with my mom friend was weird, but, out of it, I realized I have not just a "mom friend" but a forever friend, and for that, I am extremely grateful.