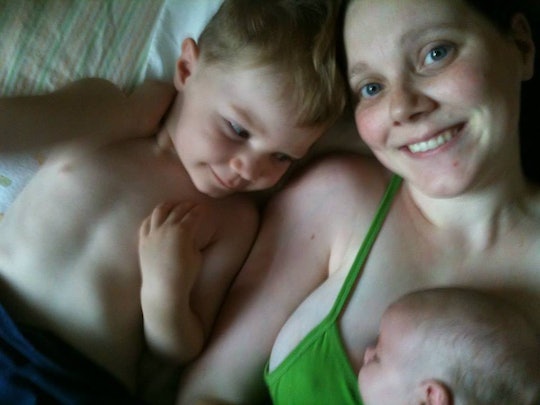 I Had Overactive Letdown & This Is What It Was Like

I love breastfeeding my children. But I can remember, so vividly, how tricky it was at first. With my oldest child, I had oversupply. I made more milk than my son could ever eat. And one part that came with having oversupply of milk was that I had overactive letdown as well. My breasts were always so full of milk that I imagined that as soon as my body detected there was a baby breastfeeding, my breasts were like "oh, good! Let's get rid of all this milk right now!" In fact, having a baby at the breast and suckling was hardly a prerequisite, because my milk would letdown all. the. time. And it was never a dainty little leak that soaked through onto my shirt a bit. On the rare instance that I was without nursing pads, I would soak half my shirt within a minute.

The most difficult part of having overactive letdown (on top of having an oversupply of milk), was that it was hard for my tiny baby to cope. My son would start breastfeeding with these cute little short sucks to get the milk to letdown and then when the milk started flowing he'd gag and cough and pull of the breast, getting sprayed in the face in the process. This happened every single time we tried to feed. I learned to just pop him off, let the milk flow into a towel and put him back on when it had calmed down a bit.

Even when he got sort of used to the torrent of milk, he'd still break his latch often. He made this clicking sound as he nursed, breaking the seal between his mouth and my breast with every swallow. As a result of the gagging and the clicking, my son ended up swallowing a lot of air. Because of that, my child needed huge burp breaks. And he was forever gassy. He still got sprayed in the face with regularity for his first six months.

I'd heard people describe the feeling of having their milk letdown as a sort of tingle, but I felt sharp stabbing pains from the nipple all the way to the deep part of my breast whenever I went to feed him.

Once, when he was sleeping, he started whimpering in a dream. I asked my partner what a little baby could possibly be having a nightmare about. My partner joked, "probably he's dreaming about trying to nurse a shower head." My partner was probably right. And indeed, my milk sprayed out of me with such force that it probably could rinse the shampoo right out of someone's hair.

To top it all off, having an overactive letdown hurt. A lot. I'd heard people describe the feeling of having their milk letdown as a sort of tingle, but I felt sharp stabbing pains from the nipple all the way to the deep part of my breast whenever I went to feed him. Even after the sore nipples healed, I'd have to bite my lip and curl my toes to cope with the pain of my letdown.

Whenever my son fed one breast, the other one would letdown just as enthusiastically as the one he was on.

The plus side of always being able to feel when my milk started flowing was that I learned pretty quickly how to prevent leaking. I'd push on my nipple as if it were a button to hold up my flow. And, yes, I would often be seen with my arms over my chest to hide the fact that I was pressing on my nipples with all my might, but I didn't care. Whenever my son fed one breast, the other one would letdown just as enthusiastically as the one he was on. This button trick came in handy then too.

I discovered a couple of other tricks that helped my son cope with the powerful flow of my overfilled breasts. I also learned that side-lying breastfeeding worked for us, and he could let extra milk just dribble out of the corner of his mouth if there was too much. Of course, this meant that my bed sheets always got a bit wet during a feed, but since I was leaking on them every time I slept, I was used to doing a lot of laundry. The other position that helped us both was for me to lean back and let him nurse from on top of me. Gravity worked in his favor in this position. This position is called "the Australian hold" because I was nursing him from down under. (It's a terrible joke, but it's actually what it is called.)

Just like with any complications or unanticipated issues with breastfeeding, the solution to my overactive letdown was just to try different things. I tried different positions, block feeding to reduce my supply, and different types of nursing pads. Much as I sort of loathe the plethora of "Keep Calm" posters out there, I do think a "Keep Calm, and Keep Breastfeeding" one would be sage advice. My son and I figured it out how to work through my overactive letdown together. He was a fat cherub of a baby who was clearly getting enough, and I eventually got very skilled at not getting my milk everywhere. And I'm happy to say that when my second baby came along, my breasts were not nearly as overeager or overachieving. Which, I think, was a really good thing.