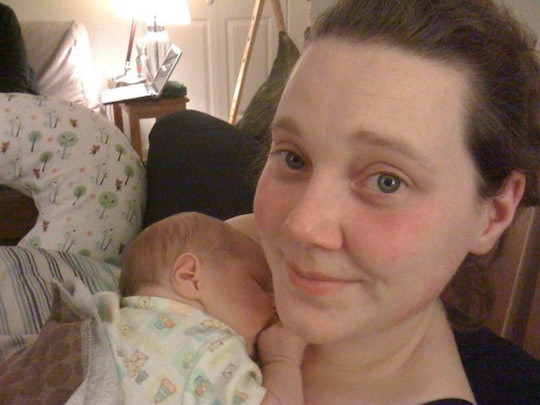 I Had Oversupply, & My Life Was Ruled By Milk

A lot of breastfeeding moms worry if they're producing enough milk. And for those moms who struggle with supply, it might sound ungrateful of me to complain about having too much milk. I do feel lucky that I've never worried that my baby was getting enough, but having oversupply can still present a few difficulties when it comes to breastfeeding. I remember the morning I woke up to find that my milk had come in. My breasts were rock hard, and my skin was stretched so tightly that it looked almost shiny. My mom had been staying with me since the birth of my son, and we had a bit of a laugh at the ridiculousness of it. It was uncomfortable, but I marveled at how my body was preparing to feed my baby for the next year.

My breasts were so engorged that it was hard to get my baby to latch. I had to hand-express some milk or massage around my nipple to soften the area enough for my baby to be able to latch. My mom reassured me that the uncomfortable engorgement was temporary, and to some degree she was right, but I struggled with it all the same for a few weeks instead of a few days. I'd wake up soaking wet with milk every few hours. Disposable or reusable nursing pads couldn't contain the amount of milk I was leaking, and I'd end up sticking a whole cloth diaper in each side of my sleep bra along with sleeping on top of towels. If my baby slept for more than three hours, my breasts would become swollen and engorged again. When everyone told me to let the baby sleep, I'd glare at them. I needed my baby to eat. And, luckily, I could often "dream feed" him: he would latch and feed without fully waking up.

The plus side to all the milk was that my baby was growing like a weed. He didn't lose any weight after birth since my milk came in so quickly, and it took no time at all for him to chunk up. Thankfully, never once did my pediatrician suggest I supplement (which is something a lot of my friends have been told to do).

Every time my baby breastfed, the breast he wasn't on also letdown. I had to wear nursing pads around the clock for his whole first year. And my milk would letdown randomly, all the time. Or not so randomly, since sometimes all it took was looking at my baby or hearing any baby cry.

I was part of a really supportive online breastfeeding community. For the most part, I followed their advice. I put the baby to breast often. I would allow him to empty one breast before switching sides. Or, at least that was my intention. But never once did I feel like my breast was empty. I'd feed on one side for one feeding, and then feed on the other side for the next, and I spent a lot of my life feeling really lopsided. I'd have one, nice, soft, comfortable breast, and one that was hard and full.

Eventually, when my supply was well-established, I didn't need to worry so much about taking measures to somewhat decrease the amount of milk I was producing. I began to block-feed, which meant that for a certain amount of time, I'd only feed from one side. An empty breast is a signal for the body to produce more milk, so if you are emptying both breasts, your body will continue to produce or over-produce milk. And since I had an overabundance, I only wanted one breast to be empty at any given time. I slowly increased the length of my blocks, and I saw my supply start to regulate. I woke up in fewer puddles and my breasts stopped feeling so uncomfortable in between feedings.

Having an oversupply increases the likelihood of clogged ducts and mastitis, and clogged ducts can be extremely painful and persistent. It feels like you have a pesky pea, or marble, or golf ball in your breast and sometimes during letdown, I'd get shooting pains in the area. Add that to my already-sore nipples, and breastfeeding quickly became a real pain. I've only had mastitis once, and I wouldn't wish that on my worst enemy. I went from suspecting I had a clogged duct to lying on the bathroom floor with a raging fever and vomiting within an hour. I was so sick all night, but woke feeling better. But as the next day wore on, my fever kept creeping up and my breast had angry red streaks through it. I needed to treat the infection with antibiotics. I loathe antibiotics (even though I am incredibly grateful for them!) and this particular course ended with a nasty yeast infection in my armpits.

I felt like my life was ruled by milk. Either I was breastfeeding my baby, or I was changing my nursing pads again, or I was cleaning up the puddle on the table from when my baby would let go and I'd spray milk everywhere.

Even after the engorgement stopped, I still leaked a lot. Every time my baby breastfed, the breast he wasn't on also letdown. I had to wear nursing pads around the clock for his whole first year. And my milk would letdown randomly, all the time. Or not so randomly, since sometimes all it took was looking at my baby or hearing any baby cry. I felt like my life was ruled by milk. Either I was breastfeeding my baby, or I was changing my nursing pads again, or I was cleaning up the puddle on the table from when my baby would let go and I'd spray milk everywhere. Just recently, I found a book I was reading in those early days, and there were splatters of dried milk on the cover. Milk was everywhere.

I feel lucky that I never doubted my ability to produce enough milk for my baby. So much of what I read before giving birth emphasized the need to establishing a supply early. It wasn't until I woke up on day three with swollen breasts that I started reading about oversupply and engorgement. Maybe that could have been covered better in the breastfeeding course I'd taken before baby arrived. But I think that every woman's breastfeeding experience is going to be different. I was lucky to have a supportive online community to guide me through those days, and a supportive partner to encourage me while breastfeeding. And breastfeeding my second baby went much smoother. My body had figured a lot of stuff out, it seemed, and aside from a few days of slightly uncomfortable fullness, my breasts regulated really quickly and my second baby still gained weight at a steady pace.

Now that I'm pregnant again with my third child, I'm going into it as prepared as I can be. Not only do I know and understand the different issues that can arise, but I've learned how to go with the flow. Most of all, I'm not afraid to ask for help. Online support groups, meetings such as the La Leche League, and lactation consultants proved to be invaluable resources with my first two children, and I'm sure I'll lean on them just as much this time around.