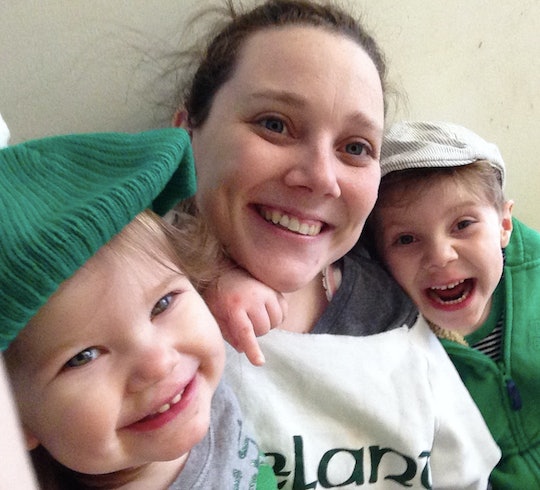 I'm Pregnant Again — And It Was A Complete Surprise

I'm pregnant with my third child. This baby is very wanted, and I didn't prevent the pregnancy. This pregnancy wasn't a result of any birth control failure. My partner and I had practiced natural family planning, but did so very loosely, knowing that a third baby would be welcome. All that said, however, this pregnancy was a surprise. Seeing that positive pregnancy test was complete shock, and I was immediately nervous to tell my partner the news. Our first two children were intentional. We were actually trying. We timed sex as close to ovulation as possible. I happily tracked my cycles, took my basal body temperature, and charted my fertility signs.

In those pregnancies, I was counting down the days until I could test to see if I was pregnant. My partner was in on the waiting. He was the first person to look at my tests and confirm that what I saw was correct: two faint lines; a "yes." We had it all mapped out. We spaced our kids out by three years, exactly as we'd planned. It's a luxury, I realize, to be able to conceive easily enough that we could plan like this. But because it was so thought out, there wasn't a lot of shock when the tests came back positive. There was happy adrenaline, but not shock.

This time around, I knew we had sex when I was fertile. I knew the odds were pretty good. I took a test right around when my period was due. And I was pretty sure there was a line. But I was positive. So when I saw my mom, I showed her the test. I didn't want to tell my partner that I might be pregnant. I wanted to tell him when I knew for certain. I took another test, which was pretty clearly positive, and sent a picture of it to my best friend. I needed confirmation that it was real before I told my partner.

Then the logistics of having three kids started to sink in. We'd need a new car. I'd have another two to three years at home with a kid full-time. I had been looking forward to the fall, when my daughter would finally be in preschool and I'd finally have alone time. Now I'll get one month of me time until this new baby is born, and then it'll be time to do it all all over again.

And when I did finally tell him, it was far from the ideal way I'd pictured it. I wasn't sure exactly what his reaction would be, so I framed the news with, "so... I had an interesting day..." But he was thrilled when I told him. And when he was so happy, I mostly felt relief. I realized then how anxious I had actually been that he would be unhappy.

In the next few weeks, as the nausea and exhaustion set in, my partner was the one who was most excited. I, on the other hand, was suddenly filled with doubts. How would I deal with all the morning sickness while dealing with two kids? Do I really want to go through childbirth again? Can we afford all the expenses of a new baby? Then the logistics of having three kids started to sink in. We'd need a new car. I'd have another two to three years at home with a kid full-time. I had been looking forward to the fall, when my daughter would finally be in preschool and I'd finally have alone time. Now I'll get one month of me time until this new baby is born, and then it'll be time to do it all all over again.

I physically felt worse during the early weeks of this pregnancy than I had with my first two. And I wasn't as healthy at the start, either. I recently had to increase my antidepressant dose because it was becoming less effective. When I was pregnant with my first, I was able to wean off antidepressants before conceiving. With my second, I was able to go down to a minimal dose while pregnant. This time around, my anxiety wasn't as well controlled with my previous dose. I had to increase the dose not once, but twice. I felt horribly guilty. Even though the medication is relatively safe, I felt selfish that I had to put my health first even if it meant increasing the risk that my baby might have certain defects.

The unplanned pregnancy had put me in an emotional tailspin. My family was so excited about the new baby, but I was fearful. I didn't doubt that I would love this baby. I knew I would. But I doubted that I'd handle the pregnancy and birth and infancy with the same ease I had with my first two.

Aside from my mental health, I had developed a digestive disorder after the birth of my daughter. I had to be on gut anti-inflammatory drugs to keep my severe chronic diarrhea at bay. I worried that I'd have to stay on that drug as well, or that my gut disorder would be out of control and I'd have trouble retaining the nutrients I needed for pregnancy.

Surprisingly, my pregnancy hormones actually seem to be helping the gut stuff. But my anxiety was worse. The unplanned pregnancy had put me in an emotional tailspin. My family was so excited about the new baby, but I was fearful. I didn't doubt that I would love this baby. I knew I would. But I doubted that I'd handle the pregnancy and birth and infancy with the same ease I had with my first two. Soon enough, all of those doubts swelled together.

I realize that so many women with kids have unplanned pregnancies. And really, I'm very fortunate to already be in the "parenting young children" phase of life already. I'm fortunate to be in a secure living situation and to have such a supportive family and partner. But the truth is, the brunt of the responsibility and difficulty are still going to fall on me. No matter how much my family is excited about this baby, I'm the one who is going to feel sick for a few months, the one who is going to breastfeed this baby around the clock and still be responsible for getting my older two kids to school on time. I'm happy to be a stay-at-home mom most of the time. But the thought of handling all that on my own in the fall scares me.

As my pregnancy has progressed, I've had time to wrap my head around what's coming. My partner has been nothing but reassuring in his belief that we can handle it, that being a family of five will be wonderful. I've had time to bond with this baby and get excited to meet him or her. I've had time to shop for tiny pajamas and remember what a joy it is to have a newborn. I've gotten to talk about the pregnancy and birth with my children and see how excited they are for all of it.

Motherhood is full of complicated emotions. I know I can feel both pride and sadness when your child reaches a milestone. I know that I can be angry at my child's disobedience while also being amused at their little acts of rebellion. And that means it's OK for me to be anxious and excited for the future. In fact, what mother hasn't felt that at some point during pregnancy? The important thing for me is not feeling guilty about being anxious. Because the one thing I know for sure is that when this child is born, I'm going to love him or her, and he or she is going to fit into our family perfectly. We've made room for them already.

More Like This
18 Pregnancy Announcement Ideas Break The Good News To Your Family
Are Movie Theaters Too Loud For Pregnant People? OB-GYNs Explain
A C-Section Actually Doesn't Take As Long As You Think, According To Experts
Who's Getting Abortions? Mothers. 59% Of Abortion Patients Already Have A Child.