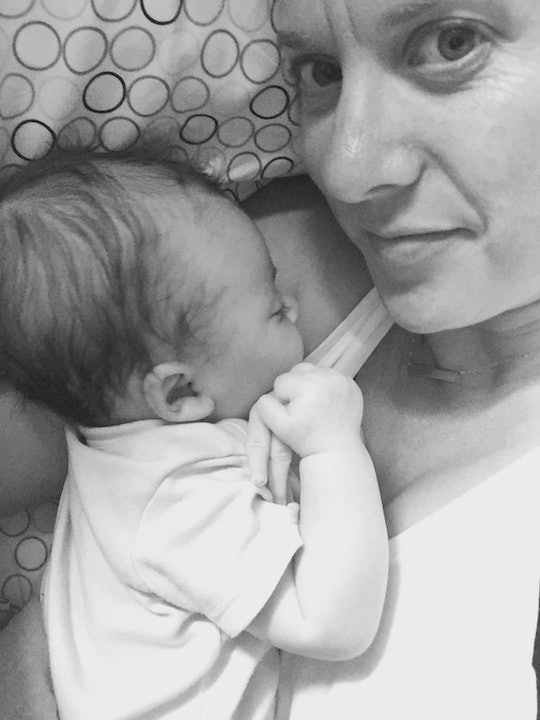 I Had Postpartum Anxiety, & This Is What I Wish I'd Known

I stood in the kitchen crying while making a bottle. I sat on the couch crying while feeding my daughter. I laid next to my sleeping baby, singing to her, and crying. On a weekly basis, alone in my apartment, crying was par for the course, which is sort of not how I’d pictured new motherhood at all. I’d pictured being tired, changing lots of diapers, generally loving to cuddle this insanely cute creature I’d grown inside of me for nine months. But I hadn’t pictured the full-blown panic attacks that would come at seemingly innocuous comments. No, those I never saw coming.

Living in a low-level state of anxiousness and frustration became my new normal, and days spent alone in my apartment stretched out into weeks. I struggled to remember the last time I’d been outside ... or showered. I spent many a night frantically Googling “postpartum anxiety” through blurry eyes. We'd get comments from friends and family about how calm and at-ease we were with new parenthood. That version of our life couldn’t have been further from the truth. I was desperate to find someone who could confirm that what I was feeling was real, and not just a part of new motherhood nobody told me about.

I’d heard all sorts of stories about postpartum depression, yet none matched my experience. I didn’t feel detached from my daughter or think that everyone was better off without me — I felt the exact opposite: I never wanted to leave her side and nobody could be better for her than me — not even her father, and certainly not the outside world.

It was debilitating, isolating, and totally normal.

At first, I wondered if what I was feeling was “hormonal,” a phrase people throw around often to describe a woman’s behavior shortly after giving birth. Though, to be fair, hormones are sometimes not your friend in the days and weeks post-birth, and likely at least a partial cause of some of my feelings surrounding new motherhood. I’d experienced “hormones” before, but what I was feeling wasn’t run-of-the-mill emotional. It wasn’t my body trying to regulate itself. And when I started to run down the list of my friends and family members who had kids, I couldn't remember anyone who’d described what I was feeling three months after giving birth.

Finally, one day, I started talking. I talked about new motherhood and my feelings and my frustrations and my fears. First, with my husband, then with a friend. I kept talking — and didn’t stop. I forced myself to do things that made me incredibly anxious so that I wouldn’t continue to be a prisoner of my own thoughts. While it may have seemed small from the outside, taking a walk around the block with my daughter felt like a huge accomplishment. Driving in the car with her to and from a store felt like I was mom of the year. Sure, she’d sometimes cry, I’d sometimes cry, and there were days I gave into my own head and stayed in the apartment all day. But over the course of a few weeks, while talking and pushing through the uncomfortable and sometimes debilitating feelings, I slowly started to realize that most of my fear was simply fear of the unknown. My daughter was adapting to change just fine; I was the one that was struggling.

But I wasn’t alone. According to Postpartum Support International, roughly six percent of pregnant women and 10 percent of postpartum women develop anxiety after giving birth. Sometimes women experience anxiety alone, and sometimes, new mothers experience it in addition to depression. And as I read down the list of symptoms on their website one day, I realized that it was as if they were describing every single thing I’d been experiencing for the last several months. Finally someone had given voice to the way I felt about new motherhood — and the words they used were not "overwhelming joy" and "happiness."

Coming out of my experience with postpartum anxiety, I’m now armed with a few facts: it’s going to be OK, I was going to be OK, and my baby was going to be OK. Three months may have felt like three years, but it got better. Help is available. Help is within reach. And yes, my thoughts still raced, but I was able to catch up to them. To-do lists still screamed inside my head, but I had tools now to quiet them. I was no longer unable to settle down. I was no longer unable to relax. I no longer felt like I had to be cleaning bottles, baby clothes, and the apartment at all times.

I no longer (constantly) worred about doing it all right – though, to be honest, I’m pretty sure this one may never totally go away; I’m pretty sure it’s what they call “parenting.” I was armed with tools that helped me realize that nothing awful was going to happen: to me, the baby, the world with the baby in it … and I no longer constantly felt that I was going “crazy.” I didn't always worry that the person I used to be was gone forever and that everyone around me was judging or teasing me for opening up.

As a new, overwhelmed mom, I wish I had spoken up sooner. Talking about postpartum depression and anxiety helps. It may not be the only thing that helps, but it is a start. And it's a really important start, because someday, and someday soon, you’ll wake up, put the baby in the carseat, drive to your destination, and not think twice about what could or will go wrong. It’ll just go right. Or it won’t. But somehow, that’ll be OK too.