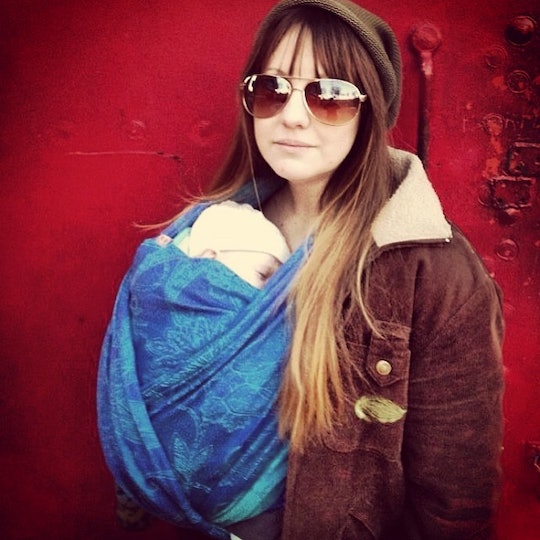 Parenting Through Medication Withdrawal Was Hell

I stood in the parking lot and cried, trying to talk through my tears to the AAA lady on the phone. “I locked my key in my car,” I said. “It fell off the keyring and I don’t know where it is." I had my three small children with me, who, at that moment, were running amok through a parking lot next to a river. The AAA lady said they’d have someone there in about 45 minutes. I hung up, then slumped against the car and wept. First I couldn’t get my son’s bike out of the car, as it was wedged around the double stroller. Now the keys were locked in the car, and I didn't know what to do. This was the first sign that something was going very, very wrong with my medication. And to be honest, parenting when things go wrong is difficult enough, but parenting through a medication withdrawal? It's hell on earth.

I'd started taking the atypical antipsychotic Vraylar about a year earlier. It worked to help with my treatment-resistant depression, but it took a long time to figure out the drug was to blame for both my 50-pound weight gain and my growing insulin resistance. I had to get off it. So I did what my psychiatrist told me: I took half-doses for a week and half, then cut the drug out altogether; cold turkey.

Unfortunately, as I discovered that day in the park, gradual withdrawal didn't go as planned. I’d been edgy and anxious for a few days, as is typically the case when you go off a drug you've been taking for a while. But this was something else. This was a total mental breakdown. It was as if every mental illness I’d ever had suddenly flared at once: the treatment-resistant depression, the generalized anxiety, the suicidal ideation. And in the middle of it all, I had to care for three little boys. I had to parent through the drug withdrawal process, and it was hell.

“We forgive you,” my older sons would say. And my heart would break again, because they shouldn’t have had to forgive me. This is what they’ll remember about you, about their childhoods, my illness taunted. They will remember you screaming and crying. And I’d cry even harder, but silently.

My depression got worse throughout the day. Mornings weren't so bad, so my kids could get their work done. (I homeschool the three of them.) But somewhere around lunchtime, I'd start a downward slide. I’d start snapping at the kids for trivial things: I’d yell at my 5-year-old son for screwing up his carseat straps, or scream at my 7-year-old son for dropping Legos on the floor. “Who’s going to pick them up?” I roared at him. “Why are you all so bad all the time?!” Then I’d realize what I said and crumble. I’d apologize through my tears. I’d explain again that mama was trying to get off a drug and it was very, very, very hard, and making her sick. The things I said, I explained, were because of the sickness, not the drug.

“We forgive you,” my older sons would say. And my heart would break again, because they shouldn’t have had to forgive me. This is what they’ll remember about you, about their childhoods, my illness taunted. They will remember you screaming and crying. And I’d cry even harder, but silently.

Nights were the worst. My husband knew it and sped home from work as soon as he could. The kids watched TV show after TV show while he sat in bed with me as I howled with grief. I knew the kids heard me, because they all drew me pictures to show how much they loved me. “I LOVE MAMA,” my son wrote, and drew pictures of my favorite things, including a whale and a spotted moray eel from the zoo. This is what they will remember, I feared. This is what they’ll recall.

I finally couldn’t live with it anymore and saw my psychiatrist. She diagnosed me and set me on a small dose of Abilify, another atypical antipsychotic, which would hit the same neurotransmitters as Vraylar and ease the withdrawal. “This should help right away,” she said. And it did. The rage disappeared. I still had panic attacks and crying jags, but they lessened as time went on. I still struggled with intrusive thoughts about things like nuclear war and the prospect of my husband dying, but I rarely cried as much as I did right after I went off the medication.

When you're in so much pain, it's hard to even summon the strength to throw together some bologna sandwiches.

I posted updates on my Facebook page so people knew I was suffering. One woman sent us a meal. Another kept me company during an afternoon playdate. Another went to the park with my kids and me, and didn’t say a word when I spent most of the time frantically texting my husband, who was desperately trying to calm me down.

These friends were incredibly helpful, but for the most part, while I got lots of “thinking of you!!!!!” and hearts on my statuses, I didn't get a lot of real, tangible help — no one offered to take care of my kids so I could take naps, for example. I am grateful for the love, but I could have used someone to sit with me every afternoon, or send more meals. My husband’s the cook, and he was spending all of his time trying to comfort me.

It’s hard to parent through a mental breakdown, because you never know what your mood will do next. It’s an angry, depressive spiral: first, you snap at your kids out of stress, then you realize you’re snapping at them and feel guilty about screwing up their entire childhood. When you're in so much pain, it's hard to even summon the strength to throw together some bologna sandwiches.

I’m glad my breakdown only lasted for about a week before I got help. I would have gone earlier, but I was scared my doctor would put me back on Vraylar or put me in the hospital. These fears kept me from getting the help I needed earlier.

Thankfully, my kids don't seem to have been adversely affected by my struggle. I don’t think this one week will be what they remember of me as a mom. If they do, as my husband says, they’ll recall it as a symptom of my depression, not as me as a mother. That’s my most important takeaway from all of this: that my children love and support me and have bigger hearts than I thought. It’s heartbreaking to have to find that out firsthand, but I’m grateful that it’s true.