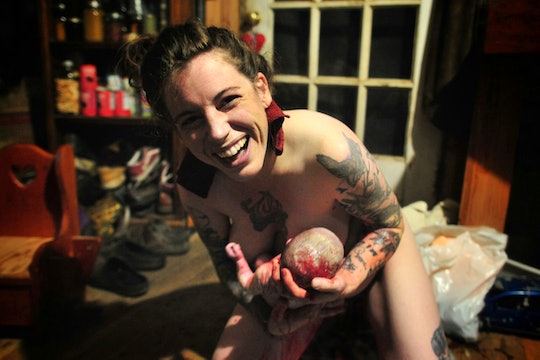 I Had An Unassisted Home Birth... Again

In a one-room cabin deep in the woods of Washington state, Megan Blackburn Friend, 41, had an unassisted home birth with just her partner, Erik, on hand. She had no medicine, no tools, beyond some dental floss to tie the umbilical cord, and the nearest hospital was 30 minutes away. Oh, and her two younger babies were racing through the one-room home while she was birthing. We had so many questions. Here’s everything Megan Blackburn Friend had to say about her unassisted home births (yes! She did it twice.). As told to Danielle Braff.

With my first, Birdie Feather, 4, I woke up with contractions at around 8 a.m., and the midwife was a little over an hour away. I made the drive to her house, and Birdie was born shortly after. It was so quick. So when it was time for Everwild Forest (now 2), I had spoken to the midwife about what would happen if things progressed too quickly, and I had to deliver at home.

She said I would know what to do.

When the day came, I sort of reached a point when I just didn’t feel like getting in the car and going anywhere. So I had my midwife on speakerphone. I woke up at 8 a.m. with contractions, and it progressed very quickly. I was pretty locked in within my mind, and I was trying to feel it all. I felt like I had learned a lot from my first delivery. I had analyzed how everything went. When you start your contractions, you had an urge to push, but I figured out that my body pushes on its own during the contractions without me adding to it and physically exerting myself. I was thinking, “I’m going to wait until I absolutely cannot stop myself from pushing.” It helped me relax during contractions, and I let my body do what it needed to do.

At some point, I physically couldn’t stop myself from pushing.

Someone had once told me that every contraction was a wave, and the moment it feels the most painful, it’s about to come back down. The second it didn’t feel quite as bad as it did just a second ago, I would feel a sigh of relief. The whole ring of fire was the absolute truth, but it makes me want to push harder and get that part over with. Any time I hear the words, “The head is out,” I muster up all the energy I can find and I just get that baby out.

The next birth, I decided ahead of time to do an unassisted birth at home. We’re about 30 minutes from a large hospital. We live in a rural area, but we have volunteer ambulances and firefighters, and a good friend is a wilderness first responder. We had the car faced the right way in the driveway, and it was filled up with gas in case of an emergency.

My third labor with Andromeda Forever Friend (3 weeks old) was even faster. My water broke at midnight, and I went back to sleep. I was woken at 3 a.m. with crazy contractions. I live in a one-room cabin, and my partner, my two children and I share a California King bed. The kids were amazing. They feed off of us so much more than we realize. I really made an effort just to stay in my zone, and the kids [saw] me staying calm, so they were calm.

We deal with body fluids all the time, and this time, you get a baby at the end of it.

Birdie doesn’t like blood, so she didn’t want to touch it and she waited until everything was cleaned up to get close to Andromeda. She speaks very calmly about the process of having kids — I think it’s good for her that she has seen this.

I can see how some people are like, “I don’t want to deal with all that mess.” But we used absorbent pads — like the ones you use to train a puppy — and towels. It was just a nice big load of laundry. We deal with body fluids all the time, and this time, you get a baby at the end of it.

When Andromeda came out, we had a sharp pair of scissors that we sanitized to cut her cord. We used dental floss to tie it. We usually put the placenta in a freezer bag, and we plant it under a tree.

I would totally do an unassisted home birth again. I get to be at home, I get to stay at home, get into my own bed with my baby and be surrounded by my kids and my man. I’m in my most comfortable place and I never have to leave.

Around 1% of babies were born at home in 2018, per CDC data, with around a third of those taking place without a physician or midwife present.

Read the next piece from Not In The Plan, essays about the unforeseen elements of birth, and the ways people recover.

More Like This
Are You Leaking Amniotic Fluid Or Is It Normal Discharge? Experts Explain
20 Bridgerton-Inspired Baby Names
Rainbow Baby Shower Ideas To Celebrate A Very Special Baby
New Report Shows 80% Of Pregnancy-Related Deaths Are Preventable