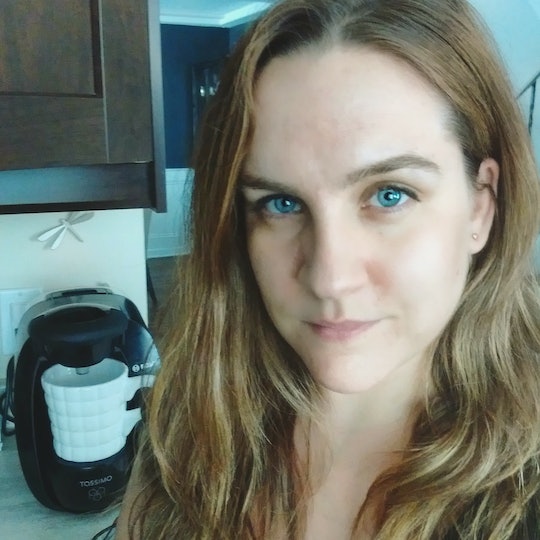 I Had Vaginismus & This Is What It Was Like

Over the past decade and half, I've spent a greater than average amount of time sitting in various doctors offices, discussing my own vagina. For some reason — still, I have no idea why — I've had all kind of issues with my lady business that a number of doctors have seemed either unable or unwilling to help me with. And mostly that's because none of those issues were things that were easily treatable, or even easily diagnosed. No lab tests or examinations could explain why I suffered from chronic vaginal pain, from burning that would make me cry during pelvic exams, completely recoil at the thought of using tampons or having sex, or just feel completely and miserably uncomfortable in the days before my period. A lot of doctors dismissed my concerns as a result, with some doctors (always men) vaguely commenting on "the complexity of the female libido." And then, finally, one of them figured it out: I had vaginismus, a vaginal pain disorder characterized by involuntary muscle spasms that can often occur in women with untreated chronic vulvar pain.

According to the American College of Obstetricians and Gynecologists, vaginismus is "a reflex contraction of the muscles at the opening of [the] vagina," which can make it painful (or downright impossible) to have sex, or any of the other aforementioned tasks that involves the vaginal opening (tampons, menstrual cups, pap smears, etc.). For me, vaginismus developed secondary to years of suffering with a specific kind of vulvodynia (chronic vulvar pain) called provoked vestibulodynia. I'd basically spent so long trying to just deal with the pain, to suck it up, to push through, that my vagina said nope! and literally shut down, refusing to be subjected to further pain.

Looking back now, I realize that trying to overcome vulvodynia by sheer will and determination was absolutely the wrong approach. It took me years to even consider that the problem was not a personal character defect, that it wasn't something I'd done wrong, or something I deserved. And it also wasn't a problem I was responsible for solving on my own. I'd taken my concerns to doctor after doctor, and when I'd inevitably leave without help, or with a diagnosis I was almost certain was wrong (no seriously, I really don't think I have a yeast infection), I'd go home, cry, and try to make peace with the fact that I would never be pain-free.

By the time our wedding rolled around, we'd been forced into complete abstinence by my own body.

Ironically, my experience with vaginismus was at its height around the time I got married. My new husband and I had never known what it was like to have sex that didn't hurt me in some way, that didn't leave us both frustrated and angry and disconnected from one another, that didn't sometimes end with me in tears. But we'd still keep trying, sure that one day we'd figure it out, armed with the misguided advice from one doctor that vaginas are "use it or lose it" organs, whereby we'd only be making our chances slimmer if we stopped having sex altogether (note: this is terrible, terrible advice). But by the time our wedding rolled around, we'd been forced into complete abstinence by my own body, because the fact that I'd developed vaginismus meant, even if we wanted to have intercourse, the involuntary muscle contractions meant that it just wasn't going to physically happen.

Along the way, I tried all sorts of remedies, conventional and alternative. I tried pretty much every birth control pill in existence, creams galore, all kinds of lube, herbs, homeopathic remedies, acupuncture. I tried relaxation exercises, and had a short-lived experience with vaginal dilators recommended by an OB-GYN, which just left me feeling uncomfortable and weird and like this was somehow all my fault. But, inevitably, I'd end up right back where I started. And that was heartbreaking.

Once, I guess in an attempt to think outside the box, one gynecologist/sex therapist we saw suggested he write us a prescription for a sedative. That way, he figured, I'd be relaxed enough that vaginismus would no longer be an issue. My husband stayed quiet, but fumed when we got back to our car.

This time, with this doctor, it was different.

"You are not going to drug yourself so that we can have sex," he said. "I'm sorry, but date-raping my wife is not my idea of a good time." He was right, of course, the idea was preposterous. But, lacking other options, the truth was that I was willing to give it a try.

I can't quite remember now how I ended up finding the OB-GYN who finally helped me, but I do remember what it felt like to see her for the first time. I sat in the waiting room before the appointment, the familiar feeling of dread in my stomach as I rehearsed all of the things I was going to tell her, hoping that she'd take me seriously. Each time I saw a new doctor, I'd try to temper my own excitement, to try not to get my hopes up because I knew chances were slim that I'd leave with any new solutions. But this time, with this doctor, it was different.

"You know, I see a lot of young women like you," she explained kindly. "Don't worry, we are going to fix this."

It was what I'd been waiting for someone to say to me since I was a teenager.

The doctor wrote me a prescription for a compounded cream that contained an antidepressant medication and a painkiller. We also discussed coming off of oral contraceptives all together, as I'd never tolerated them well. I did both, and within a few weeks, the pain had almost entirely subsided. For the first time in my life.

A few months later, I found out that I was pregnant with twins. When I decided to come off of birth control at my doctor's suggestion, Matt and I had also decided, independently of my vaginismus, that we wanted to try and get pregnant. At that point, my desire to become a mother was strong enough that, even if my doctor's treatment suggestions hadn't worked, I still would have endured having painful sex if it was what we'd have to do to conceive. Luckily, I didn't have to.

When I went back to see my doctor and inform her of my pregnancy, her reaction was one pure happiness on our behalf. She was so excited for us, for me, for our new little family-to-be, and she reassured me that once I was in my third trimester, I could come back and we could start looking ahead to my delivery, since the idea of giving birth is often understandably nerve-wracking for women who have suffered from pelvic pain. Unfortunately, I never made it to my third trimester — I had a complicated pregnancy and delivered my twins at 25 weeks gestation — and by the time I finally made it back to her office almost a year later, I learned she'd moved to a new city, and had become the chief of obstetrics and gynecology at a new hospital.

I was disappointed that I no longer had her as a resource, but the truth was that, well, I didn't actually need her anymore. Not only was I able to get pregnant without pain, but I was surprised (and unbelievably relieved!) to find that sex after giving birth was much easier and more enjoyable than it had ever been, and since then, I'm grateful to say I haven't had any issues with painful sex at all. The only physical reminder I've had of the years I struggled with vaginal pain was when I tried out a menstrual cup, but with some patience and practice that went away too, and I've become a total convert.

Looking back, I wish more than anything that I hadn't had to suffer in silence for so many years. I wish I could go back and tell myself it wasn't my fault, that I deserved better, that my concerns were real and should have been taken more seriously. I wish I hadn't forced it, I wish my husband and I hadn't fought so much about it as though it was a sign there was something wrong with our relationship (there wasn't). But more so, now, I wish that we can start talking about it, openly, and without shame. Because as awful as it is to have vaginismus or vulvodynia, feeling like you have to suffer with it in silence is so much worse.

More Like This
Stepmom Quotes & Sayings For Every Occasion
A C-Section Actually Doesn't Take As Long As You Think, According To Experts
All Your Questions About Getting Pregnant After A Tummy Tuck Answered
All The Reasons Why You Might Have A C-Section