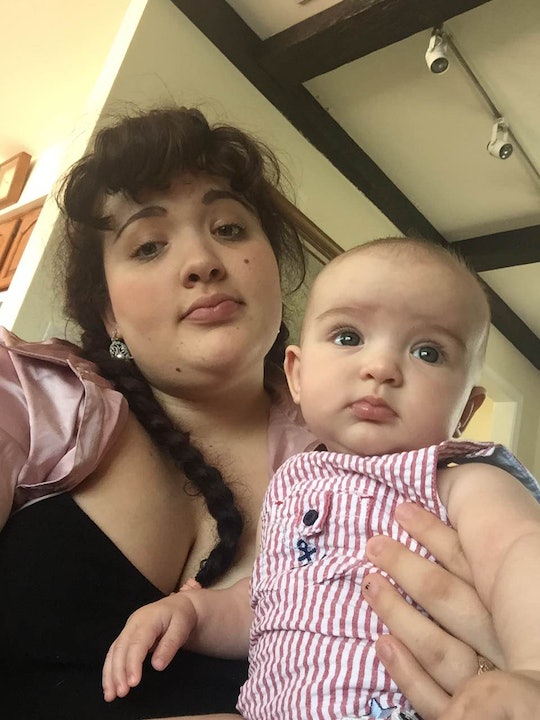 Will My Anger Issues Make Me A Bad Parent?

Last summer, after 13 years of searching for a therapist, I finally found one I liked. He didn't speak in platitudes. I never once heard "this too shall pass" or "remember you aren't trapped" come out of his mouth. Instead, he was contemplative and insightful. He asked tough questions and responded with soft yet stern bluntness. And he was the first person who diagnosed me with anger management. And while I've always suspected that to a degree, now I'm worried that my anger issues will affect my parenting.

I grew up with a lot of angry people. Some yelled, some punched holes in walls (or other people). Others possessed a terrifying kind of passive-aggressive rage. I was never like that. I was the "suffer in silence" type. Every negative emotion I ever had was internalized. "It'll go away if you don't think about it or talk about it," I'd tell myself, quelling any residual resentment by burying myself into a book.

I never believed that I struggled with anger, because I never actually expressed my anger. I never allowed myself to sit with it, let alone overcome it. It never occurred to me that this, in and of itself, might be a problem. It never occurred to me that anger could be a healthy emotion, if expressed safely and with just cause. I associated it with hatefulness and aggression; with pain and violence; with people I didn't necessarily want to be like.

But suppressing my anger hasn't done me any favors. As that therapist told me, all of my anger that had accumulated over 26 years hadn't actually gone anywhere. It was brewing. It would keep brewing until I was absolutely stuffed, and then I would either explode or implode. Maybe I would smash all the plates in my house, or throw our 15-pound ceramic elephant at my partner's head. Perhaps I'd hit a co-worker or friend who unknowingly said the wrong thing at the wrong time. If I didn't hurt others, maybe I'd hurt myself.

Since having my daughter Luna, I've definitely struggled with pent-up anger from time to time. In her first few months of life, I wasn't being vocal about what I needed from my partner. I never asked him to help me with night feeds, because I assumed that because I was breastfeeding, I should do it all by myself. I never asked him to watch the baby for a few hours so I could have a long bath or take a walk. Then I got mad at him. I kept getting mad at him until I lashed out in bitterness in the middle of the night, screaming at him through my tears.

Failing to acknowledge my anger for more than two decades hasn't been especially healthy for me.

Although I have never been violent, I know that failing to acknowledge my anger for more than two decades hasn't been especially healthy for me. For one, it's led to a lot of self-criticism whenever I catch myself experiencing rage, regardless of the cause or potency of said rage. I've chastised myself for being weak-willed when the first pangs of anger hit my gut, allowing anxiety to overcome me along the way.

Whenever I have been angry — whether it's because someone lied to me, or hurt a human I loved, or said gruesome things to or about me online, or behaved like a bigoted imbecile, or hacked into my private information, or simply been cruel — I have blamed myself for my feelings. My anger has effectively been replaced with self-hatred.

The thing is, I currently surround myself with angry people — but they've chosen to use their anger in constructive ways. As an activist, I have many friends who are social justice-minded people, who've been directly affected by marginalization because of their race or disability or gender or size or sexuality. Many of them are angry at the institutions and individuals who contribute to oppression daily, and their anger is justified.

Their anger has led, and continues to lead, to tangible, progressive, and beautiful change. I have seen the benefits of anger that is ultimately bred of empathy and compassion, time and time again. Yet I have struggled to know when or if to express my own. On more than one occasion, I've failed to find the words needed to stand up for myself and others. At other times, I have missed out on the opportunity to listen and learn from someone's rage, wishing instead that the person in question could just speak more calmly.

I've decided to be hyper-conscious of this behavior, though. When the first semblance of anger arises in the pit of my stomach, I will talk about it. I won't let it stew. Talking about it might feel scary initially, but I will try my best to do so anyway. I will try my best to express my anger at my partner as calmly as possible, because anger in any relationship is inevitable, and I will try to do the same with Luna as she gets older. Because I know it's the only way she'll learn to express her own anger, too.

I want to teach my daughter that it's OK to be angry.