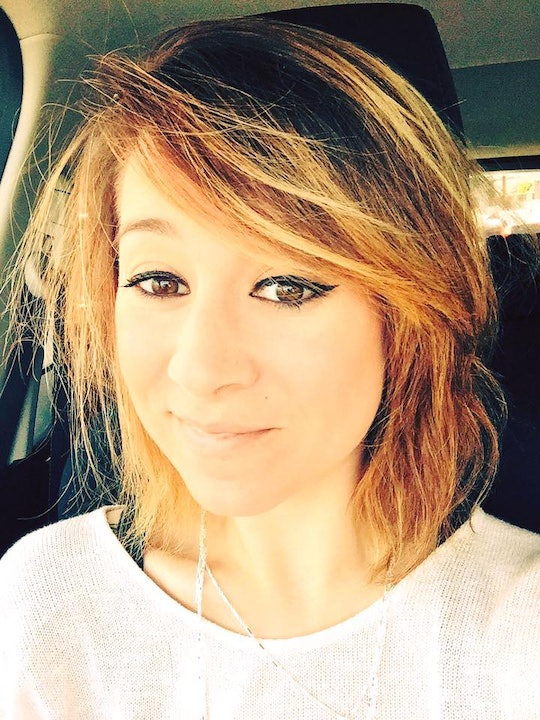 I'm sitting on the top of the stairs, looking down at my father as he insists I continue getting ready for school. I'm a freshman in high school and I'm rocking back and forth, having just started my period and experiencing intense, almost debilitating cramps. It hurts to stand straight and to walk and every once in a while I'm overwhelmed by relentless waves of nausea. I've researched my symptoms at my school's library and I'm sure I have endometriosis and I'm trying to explain what it's like, but my father insists I'm exaggerating. "Every woman experiences menstrual cramps," he shrugs, giving me a look that is both infuriating and terrifying. I know that if I don't finish putting my eyeliner on and packing my books in my backpack soon, things will get worse. I complain to my mother on the ride to school and I shuffle to my first class, wincing from the pain. Five minutes into a first period history lesson, I throw up in a trashcan in front of all my classmates. I'm in too much pain to be embarrassed but, eventually, the humiliation hits me. I'm sent to nurse's office and she calls my mom, telling her I need to come home.

That memory will forever be sketched in some back corner of my brain as the first time I realized I was suffering from endometriosis. Since then, I've spent far too much time trying to convince doctors and love interests and, sadly, even other women that my pain is real. When "Pop an Ibuprofen and take your tampon out," is used as a way to encourage a man to stop "being a woman," it's difficult to legitimize a very real pain associated with my menstruation.

In scientific terms, and according to the Mayo Clinic, endometriosis is, "an often painful disorder in which tissue that normally lines the inside of your uterus — the endometrium — grows outside your uterus (endometrial implant)." For me, however, endometriosis means mind-numbingly painful cramps, full-body aches, and endless nausea, vomiting, and pain whenever I use the bathroom and whenever I have sex. When I was diagnosed with endometriosis, it was because I finally saw an OB-GYN who took my pain seriously. She insisted on performing a vaginal ultrasound after listening to me describe my symptoms, which allowed her to locate numerous cysts she believed were a direct result of endometriosis. I was given the option of undergoing a laparoscopy, where a surgeon would look inside my abdomen and confirm my OB-GYN's initial diagnoses, but I passed. I was happy to take her diagnosis as fact, as well as the prescription pain medication she offered.

Living with endometriosis means constantly wondering if my body failed me and one of my babies. It means, sometimes, even blaming, resenting, and wishing my body wasn't so flawed.

I switched my birth control to a more hormone-heavy brand, hoping that the pain medication and the hormonal contraceptives would ease the pain I'd become accustomed to living with. Together, the birth control and pain medication beat a hysterectomy or surgery, which many women living with endometriosis are forced to endure as a way to curb the pain and live normal, healthy lives. When I was 16, having endometriosis meant being labeled as a "whore" because I needed to go on birth control. I'd learned that going on birth control could sometimes help alleviate symptoms, but to those around me, there was only one reason why a woman goes on birth control, and so, according to them, it had to be because I was a "slut." I often felt like I had to legitimize my pain for the sake of other people, simply because it was associated with an organ that could possibly, if I chose, be used to reproduce.

And, when I was 23, it meant the promise that I would never have children. I was at a regular checkup with my doctor, going through my typical symptoms and describing the increased pain I was feeling, despite the use of medication and contraceptives. My doctor feared that my increased pain was a sign of more severe issues and that, as a result, I'd be unable to procreate, a common side effect I wasn't necessarily worried about yet. I didn't want to have children at that point (and, I thought, ever), but to hear that there was a good chance it actually wouldn't be possible — that the choice wouldn't be mine at all — was devastating.

Was my pregnancy nothing more than a fluke? Would my body be able to handle the months ahead, the labor and delivery that would follow? Could I?

I didn't know if my body would be able to do the one thing a doctor had warned it wouldn't be able to do; the one thing that, statistically, it was never supposed to be able to do. When I weighed my options and determined that I could, and wanted to, be a mother, I was terrified that having endometriosis would take that decision away from me. Was my pregnancy nothing more than a fluke? Would my body be able to handle the months ahead, the labor and delivery that would follow? Could I?

Now, as a mother, it's hard to quantify just how debilitating my life with endometriosis can be.

And when I found out I was carrying not one but two children, I was both excited and terrified. I bought matching onesies and two baby carriers and my partner and I picked out baby names. Then, at 19 weeks, one of our twin sons' hearts just stopped beating, and I had to carry his diminished body inside my own for the remainder of my pregnancy in order to keep the viable twin, my now toddler son, alive. Living with endometriosis means constantly wondering if my body failed me and one of my babies. It means, sometimes, even blaming, resenting, and wishing my body wasn't so flawed.

Living with endometriosis often means having ovarian cysts that range in size and severity. It means expensive hospital trips, which include being hooked up to an IV and needing strong pain medications, both of which render me effectively unable to take care of my son. Once, not long after I gave birth, I found myself back in the emergency room because a postpartum complication turned out to be a cyst the size of a golf ball. So many of these visits, even though they're not necessarily rare, are laced with fear and dread. I often feel like I'm waiting for the cyst — the one that's so large and so dangerous — that a doctor will need to perform surgery and that surgery will be my only option.

Sure, there are medical explanations and scientific descriptions of endometriosis, but they don't do the disorder or the women who live with it, justice. Now, as a mother, it's hard to quantify just how debilitating my life with endometriosis can be. When I need to curl up in a ball or take a hot shower because that seems to be the only way to mange the pain, and my son wants to play with me on the floor of our living room, I feel guilty. When he watches as I throw up in the toilet, yet again, I wonder if he's scared or worried there's something wrong with me. As we start to plan for another baby, I'm (once again) overwhelmingly afraid that my son was just a lucky fluke and my body won't be able to get pregnant or carry that pregnancy to term.

And when someone rolls their eyes when I tell them what endometriosis is like and how painful it really is, whispering under their breath that I'm "exaggerating" and my pain "isn't real" and I'm just a "silly woman who can't handle pain," I'm right back where I was in high school: trying to convince someone that my pain is legitimate, waiting for a nurse to call and tell them that I should be home.