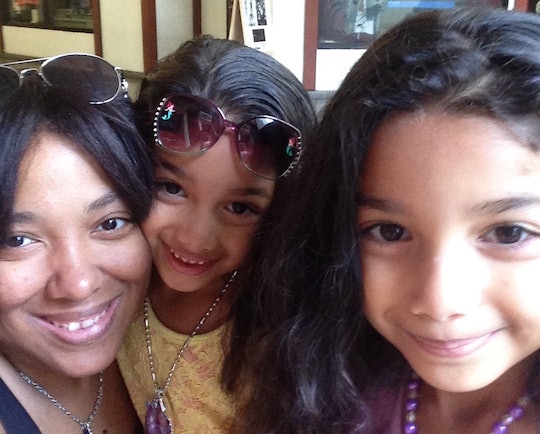 The hype about Disney is real. Taking your kids there is a trip; seeing your kids' faces as they enter leave a dusty Anaheim parking lot and encounter a full-size turreted castle will send you to the moon. It's all so overwhelming — the characters, the branding, the fact you can buy a Frappuccino then ride Space Mountain — that it can send your family a little off kilter. That's how, when I took a family trip to Disneyland with my husband and three daughters a few years ago, I managed to leave my 4 year old, Laila, behind in the gift shop — an experience that still gives me a jolt when I remember it.

Taking a trip to Disneyland was the first thing on our list when we moved from Chicago to Los Angeles. My own memories of Disney World, in Orlando, Florida, were so epic, I was excited to lay down some core memories for my daughters of Peter Pan's Flight, Mickey strolling down Main Street, and the don't-ask-questions-just-go-with-it It's A Small World ride. At the time, Anneka, our oldest, was almost 7 years old, and the twins, Mia and Laila, were 4. My husband Brayman and I figured they were young enough to feel captivated by the park, but also big and responsible enough that they didn't have to be in strollers or wear one of those monkey-leash-backpacks.

We used to judge people who had their kids on leashes. We'd see kids roaming around tethered to their parents at the zoo, the park, even the mall. As we were still new-ish parents, we didn't get it. "Just hold on to your kid" was my sentiment. Sometimes, it's not that easy.

Some kids just bail for no reason. Some kids stroll off because it seems to be in their nature. Some kids wander because of autism. When they are young, they don't understand the danger. If you've ever had a conversation with a toddler, you know how difficult it is to explain danger, pain, or fear. Trying to warn a 2 year old about "stranger danger" or being separated from their family is a losing battle, like trying to put Nike's on a newborn.

If you've been to Disney, you know that you cannot hesitate — like a shark, you must keep moving. After waiting in line for what seemed like forever to take photos with Mickey Mouse, we were trying to decide what else we should do. We had the map, but no specific plan. The Dumbo ride was going to take too long, and it was getting hot outside. The girls wanted to go on the Buzz Lightyear Toy Story ride, but my husband wanted to do something else. It turned into a small argument, the two of us standing there with our little daughters arguing over what ride to go on at Disneyland, the Happiest Place on Earth. We found our way into a gift shop, as Anneka, Mia and Laila seemed more enthralled at the toys than any of the rides on the map. Each girl kept grabbing a Disney plush toy to hug or to beg us to buy.

Laila was a bit of a wanderer. She had been known to run away from us in a crowded store, hide behind something, then jump out and yell "boo!" But she'd never done that by going far from us. Or for long.

As we prepared to leave the store, I grabbed the hand of the kid who was closest to me. On my left I had Mia, and on my right I had Anneka. I assumed Brayman had Laila.

We stepped back onto Disney's streets and stopped. I remember moving out of the way after a few people came out after us. I scooched Mia and Anneka to the side out to let people by. At this point, I was facing my husband, who was standing there alone. A sheet of ice sheared my body. I looked around us, thinking perhaps she was behind Anneka or Mia. She wasn't. I yelled to Brayman, "Where's Laila?!" He spun around. Anneka exclaimed, "Oh no!" I grabbed the two girls and we ran back inside the gift shop.

All of the worst thoughts possible were going through my head. What if she had been taken? What if she left the store on her own and was lost, wandering around the park?

Inside, we spotted Laila in the back by the wall of toys, right where we had been standing, looking terrified. She hadn't moved, we just left without her. Marooned her against a wall of Ariel dolls.

I hugged her, crying hard in the middle of the store. I didn't care if people were standing around watching (which they were). I remember saying something like "I'm so sorry my Laila, this will never happen again." Brayman picked her up, like he would never put her back down. Both sisters hugged her. Anneka was crying. Mia was seconds from unraveling. We left the store, making sure we had all three in tow.

My husband and I blamed each other. "You were supposed to have her!" I snapped. He shot the same thing back. I wanted to leave, but my husband kept saying we needed to do something to get Laila's mind off of what happened. I couldn't enjoy myself after that.

Disney is so magical, you expect to be relieved of the stress and fears that are with you every other day of parenthood. There your kids are safe, in a world custom-built to delight them. There is more security and design built into the park than you can ever enjoy in the real world. But this tiny lapse was enough to puncture the veil and give legs to those deep parental worries that course along in the background, every day of your life; that realization that you can never hold your kids close enough.

Since then, we've had a son, Kai, and I take all four out by myself all the time. Anneka is now almost 11, the twins are 8, and Kai is 9 months old. I asked the girls about what happened back then, and only Anneka remembers bits and pieces. The twins seem to have no memory of it at all, which is good. I found myself apologizing to Laila all over again the other day, and she just said, "uh huh," and went back to watching television.

Sometimes we have to remember as parents that, yes, we are going to make mistakes, because no one is perfect. Yes, we are going to screw up at times but we learn from these things. Maybe Laila wandered off that day or maybe she was playing with a toy on a shelf and didn't notice we walked away. No matter who was to blame, as parents, we learned from our mistake.

Disneyland is built on a network of tunnels that allow characters to move below the thoroughfare undetected, and for park engineers to keep everything running smoothly. It's a perfect symbol for the nonstop work you do as a parent, behind the scenes, to create a seamless positive experience for your kid. Losing a kid, however briefly, was what it took for me to realize the work I do as a mom to build a beautiful, sparkling, magical world for my kids, and forgive myself for not always doing it perfectly.

Because the world gets trickier to navigate with your kids, the older they get. I wish I could solve all my problems now with a monkey-leash backpack.