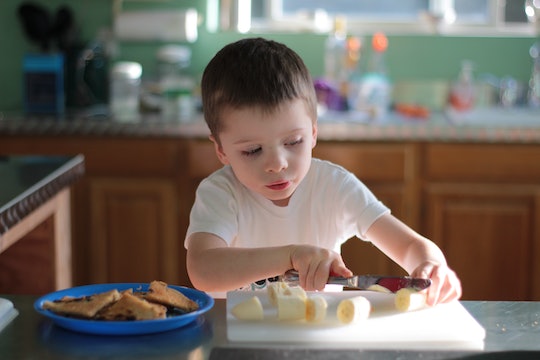 I often find myself wondering if I’m doing this whole parenting thing right, especially when it comes to my oldest son. Every age and stage is new to me. I’m figuring out his abilities as I go, and I’m sure I don’t always get it right. It’s hard to gauge what is age appropriate when I’ve never experienced this age before. I don’t want to hold my son back, but I also don’t want to push him too hard. It’s difficult to find that balance when you’re navigating the completely uncharted territory of parenthood. I want him to be fiercely independent, but I'm not sure I know how much independence is enough — and how much is too much.

More Like This
Vaccinated People Can Ditch Masks. Where Does That Leave Kids?
Is The Tooth Fairy Real?
Apple Card Family: How It Works & What Your Kids Can Learn
The 7 Best Water Tables For Your Little Ones

Since my son started school in the fall, I’ve noticed a big step towards being more independent for him. He's constantly pushing the boundaries of what he can do, physically and emotionally (much to my chagrin sometimes). He attends a Montessori-based elementary school, where children are pushed towards independence and self-sufficiency daily. They practice a lot of real-world skills, such as food preparation, table setting, clothing themselves, and even flower arranging. The staff are constantly encouraging parents to give their children increased opportunity for independence, even if it takes a little more time and patience.

I decided to follow teacher’s advice on this one and allow my 4 year old to guide the pace of his independence for a whole week, letting him do everything for himself. From getting dressed to preparing meals, I encouraged him to go above and beyond the regular limits I set for him. I checked myself whenever I was about to lend a helping hand to see if he could figure it out on his own.

Was I giving him the freedom he needed to be independent and responsible? Or had I been holding him back from his full potential? I was about to find out.

The first day of the experiment, I allowed my son to get dressed all by himself, which he does most days. He does a great job matching up his clothes and even getting ready in time for school. When it was time to get his shoes and coat on, however, he automatically asked me for help. I told him I needed to help his younger siblings get ready, and that he could do it himself. It took him a few tries and frustrated attempts with the zipper, but he got it eventually.

There was a similar instance in the evening, when he was having trouble getting his leg out of his pants while getting dressed for bed, but again, with a little time (and a few exasperated “ughs”), he was more than capable of doing it all by himself.

Normally I would've rushed to the rescue, if only to save myself from the whining and frustration of my son not getting things right the first time. I realized that my knee-jerk reaction was to swoop in a solve problems that my son could easily solve for himself because I didn’t want to deal with his frustration.

Helping is the easy way out. Letting him figure things out on his own took a lot more patience on my end.

On the second day of the experiment, I really upped the ante by letting my son be involved in all the food prep for the day. He made his own breakfast, which involved a lot of spilled milk and more cereal than he was prepared to eat. He peeled and sliced hard-boiled eggs for lunch, sliced fruit with a sharp knife, and even made himself dinner. His choice? An omelet. I’ll just let you imagine the mess that was involved when I let a 4 year old crack eggs into a bowl, then fish out the eggshell pieces all by himself.

The end result of the omelet was not something I’d willingly eat. It’s not even what I would call an omelet. It was more of a marbled, lumpy, egg disc with cheese grated on top. But you better believe my son ate the whole thing without complaint.

He thought it was the best omelet he’d ever tasted, and he is fairly confident that he’s going to be the next Masterchef Junior. And who knows, maybe if I can stand the mess of letting him cook for himself every day, he will be.

After his day of food prep, my son was excited to get back in the kitchen the next day to prepare more food. I was exhausted from the previous day of food prep, or more accurately the mess of food prep, but he was so excited to be making breakfast for everyone. We decided on oatmeal instead of eggs (thank goodness) and even from one day to the next, I could see his skills in the kitchen improving. He poured with a steadier hand, stirred with more care, and even made slightly less mess throughout the day.

Had I been holding him back from his Masterchef dreams? I wasn’t so sure anymore. He has always enjoyed cooking, but often gets bored, usually because I take over to spare myself the mess or become over-vigilant in guarding him from sharp knives and hot stovetops.

When he had full control of each step in the process, he was enthralled with cooking meals from start to finish. I realized that my desire for order and efficiency may have been holding him back from discovering a real passion.

On day four of our independent experiment, we hit a total wall. Maybe it was the overcast weather or a night of poor sleep, but when my son woke up he didn’t want to do anything for himself. He whined for me to help him get dressed. He didn’t want to make his own food. When he did get dressed, he refused to put on a jacket and wanted to wear shorts in spite of the fact that it was freezing outside.

I tried to push him to do the things I knew he was capable of doing, but everything was a fight. Everything was a struggle. For most of the day, I felt like I was “failing” at my experiment by helping him when I wasn’t supposed to. Then I realized that this was a part of motherhood, not simply an experiment. Sometimes 4 year olds have crappy days. Sometimes they just want to fight and push back to see how you react. To see if you’ll still show up and love them. We always had tomorrow to push the boundaries of independence.

After our disastrous day of not wanting to be independent at all, my son was ready to get back at it the next day. He woke me up in the morning, fully dressed and ready for the day, and informed me that he had a surprise for me. I went into his room and he showed me that he had cleaned up and organized his room, and even made the bed, before I was even awake. I shudder to think how early he got up in order to do these things (it was 6:45 a.m., after all), but I was impressed.

I decided to add in some new chores for the day, to see how he would fare. I let him mop the floors after vacuuming, which I could tell was difficult for him, but he did it all without complaint. I had him dust the furniture, which he always wants to do. I even let him help fold laundry. My impulse was to go around cleaning up after he had already cleaned, but I made an effort to leave everything the way he did it.

I could tell he felt more accomplished when I didn’t “fix” his jobs, and was more apt to want to help throughout the day because he felt like his contributions were really appreciated.

On the sixth day of our experiment, it was time to make our meal plan and go to the grocery store. After spending the week making his own meals, my son was eager to help plan the upcoming menu and help out with the shopping. I let him sit down with me and dictate what we needed, and let him make choices at the store on which brands to choose.

Where I normally would have had him crawl into the cart to keep him out of the way, I let him walk alongside me and pick out the food and put it in the cart. I could tell he felt a sense of pride in being able to do the “adult” task of picking out our food, and he was very careful and well behaved throughout the trip, when he might have otherwise been bored and whiny.

Giving him extra responsibility wasn’t met with resistance, but rather with joy. When I was able to slow down and give him the time he needed to be independent, my son was more than capable of rising to the occasion.

On the last day of the experiment, instead of encouraging new activities, I sat back and observed. I waited for my son to ask me for help, and we were all the way into the afternoon before he asked for my assistance. He wanted help getting out a yogurt and removing the foil top. When I told him to do it himself, he happily did.

I need to do things myself because I’m almost 5, and that is really big.

After watching him throughout the week and seeing him do so much for himself, I had to agree with him. His independence was impressive, and he was ready for so much more than I ever would have imagined.

Was He Ready To Do It All On His Own?

By the end of the week, I was shocked by how much my 4 year old was capable of doing for himself. The more independence I gave him, the more he rose to the challenge. He was able to do things I wouldn’t have dreamed of letting him do without this experiment, like using real kitchen utensils and doing a great job of cleaning the house.

I realized that the only thing standing in the way of him being independent was usually me. It wasn’t that I didn’t really think he was capable of doing things for himself, it was simply easier for me to do things for him. But by the end of the week I saw how worthwhile it was for me to let him take the reins. It instilled a greater sense of pride and confidence in his abilities when he was able to do things completely on his own, and it was amazing to see his passion for cooking bloom over the course of the week.

From now on, I think I’ll brave the messy kitchen every once in awhile if it means allowing my son to explore his passion. Losing a little time and testing the bounds of my patience is certainly worth the reward of instilling independence in my son.