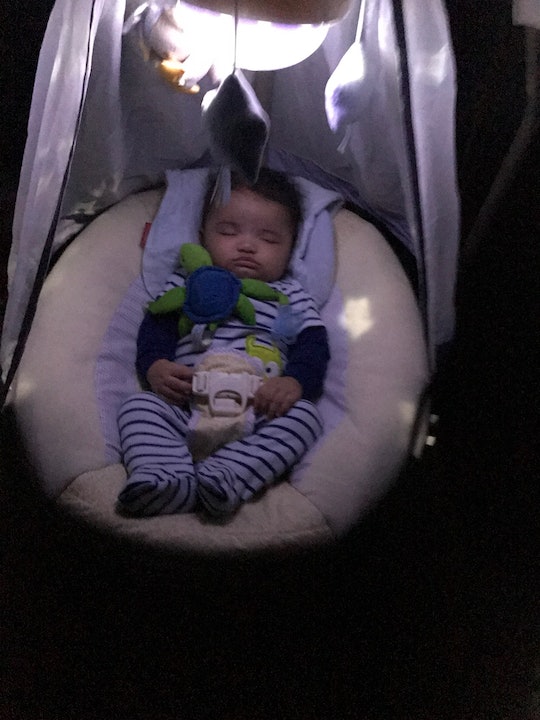 I Let My Baby Sleep In His Swing All Night, Because No One Told Me Not To

Until he was about 4 months old, my baby had a standard bedtime routine. My husband gave him a bath and dressed him, then handed him to me so I could give him his bottle before bed. I rocked him to sleep until about 8 p.m., when I'd put him in his swing. He'd sleep there for the rest of the night. Yes, I'll admit it: I let my baby sleep in his swing all night, and I have such mixed feelings about it.

At first, I was breastfeeding Kai, so he slept in the bed with us. But I was afraid to continue bed-sharing. I tried putting him to sleep in his crib, but he'd wake up the minute I put him down. Then I remembered what I did with my first three children when they wouldn't go to sleep from me rocking them, singing or humming to them: I'd put them in their swings. The gentle rocking motion, lights, and sounds lulled them to sleep.

It was never my intention to let them sleep through the night in their swings. It just happened. They'd fall asleep, and because I'd been told to "never wake a sleeping baby," I let them stay there. After a few months, I started putting them in their cribs, where they'd sleep soundly through the night. So I decided to try the same with Kai. I had no idea that it was unsafe.

According to the Safe to Sleep campaign, babies should sleep on their backs, and not in an inclined position. They should be put down in a crib with no extra sheets or bedding, otherwise they might be at risk for SIDS. Though my swing reclined, I began to worry if it was, in fact, dangerous for my son to sleep in there for long stretches of time. Some research even suggested that the straps that are supposed to keep a baby safe were a strangulation hazard.

I know I'm not the only mom who has let her infant sleep in a swing for long stretches of time, particularly as a last resort when the baby won't go to sleep any other way. But my research proved just how much things had changed since I had my first child nearly eight years ago. When I had my son, the pediatrician gave me a short rulebook to abide: I was not to bathe the baby every day, not to use lotion on his skin. Fine. But when it comes to taking care of babies and children, the rules are constantly changing, and guidance on safe sleep seems the most high-stakes topic to navigate. As any parent trying to manage family sleep knows, it's ultimately up to us to figure out what works for us and our children.

Eventually, we started transitioning Kai to his crib. We were worried he'd become reliant on the swing's rocking motion, so we let him fall asleep in his swing, then tried to move him to his crib. Naturally, the first time we tried it, he woke up and started crying. That night finished with him sleeping in bed with me while my husband slept on the couch.

Since then, he's gone back and forth between sleeping in his own crib and sleeping in our bed with us. (I took precautions like taking the pillows out of the bed to cut down the risks of bed-sharing.) We still have issues with him sleeping in his crib, but he can now manage long stretches of sleep there, and only uses his swing occasionally.

I can't believe I didn't know it was unsafe for him to sleep in his swing for as long as he did, but I'm glad we finally transitioned him into sleeping in his crib, because it gives me the peace of mind of knowing that he's safe. Plus, he seems to really enjoy stretching out.

More Like This
I'm Having A Slow Lazy Summer For the First Time In 20 Years & It’s All Thanks To My Son
Dr. Jill Biden Just Delivered Some Frank, But Powerful, Advice On Motherhood
Reddit Applauds Mom Of Five Who Stood Her Ground & Left Sleeping Dad Behind
I’m A Newly Single Mom. How Do I Get Over My Body Insecurity?