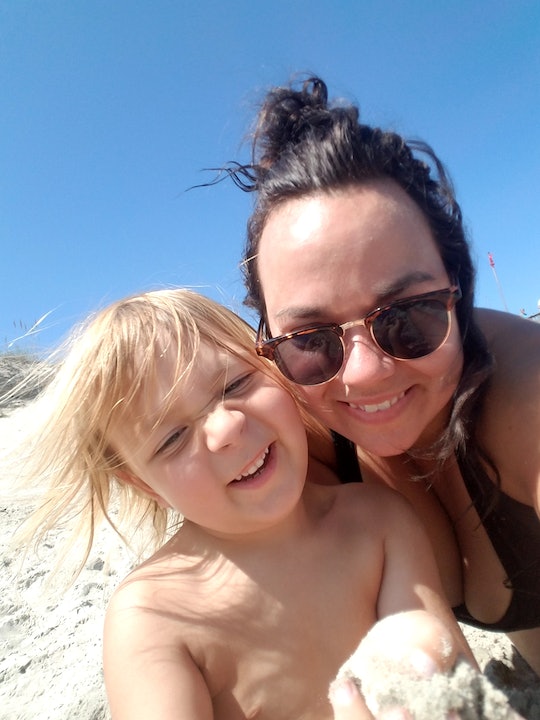 My Kid Watches Grown-Up Shows & He's Going To Be Fine

As a parent, there’s never a time when I'm not worried that I'm doing the right thing for my child. If it isn't the food I'm feeding him, it’s the books I'm reading to him before bed each night. But while some parents may argue that it’s important to control what your child watches on TV as much as you possibly can, I let my kid watch grown-up shows and so far, he hasn't been permanently damaged.

That’s not to say that there’s anything wrong with supervising what your child watches on TV, since every parenting style is different. But for me, this is what’s worked so far. Despite friends or family worrying that my little guy is watching content that’s a little mature for him, or that the TV-14 rating should be taken more seriously, he hasn't learned any lewd behavior from the police officers on Brooklyn Nine-Nine just yet.

That's not to say I'm subjecting my four-year-old to the mature content of HBO shows, but he's totally fine catching a few minutes of an evening sitcom, and frankly I think there are more important things to focus my energy on as his mom. It’s not a matter of giving my son access to all kinds of adult shows to simply see what happens, I just don't see the need to censor everything just because it’s not a cartoon or a Disney Channel program.

I think I began being so lax with shielding my kid from certain content shortly after he was born. At the time, I’d taken several months off from work and my days consisted of caring for him and catching up on a ton of TV I’d never seen before. (Yes, those were glorious times.) But back then, he was an infant and I didn't really think anything of having him in the same room while I was watching several episodes of Game of Thrones in one day.

As he grew a little older and started to pay attention to what was on TV and understand it a little more, I did keep some stuff from him (no GOT beheadings for him, thank you very much). But for the most part, I could see no real harm in refraining from changing the channel or sending him off to his room while I watch what I want to watch.

When my son, who will be five in September (but is basically already a sassy teenager), watches TV on his own or fires up the iPad, he typically watches one of his many cartoons or shows on Netflix like Boss Baby or Goosebumps. But when I want to unwind at the end of a long day and turn to my own Netflix profile, he suddenly looks with interest to see what I’m getting into.

Sometimes it’s GLOW and I encourage him to take a look at all of the strong female wrestlers, and other times it’s something like Brooklyn Nine-Nine. I mean, the kid has mastered mimicking the facial expressions and movements of each character in the opening theme song sequence. How am I going to stop letting him watch it now? He’s also come to admire them as police officers. So what if Jake Peralta’s version of "that’s what she said" is "title of your sex tape"? I'm pretty sure my kid hasn't caught on yet.

Some parents may choose to keep anything above a TV-G rating away from their children’s eyes and that’s fine too. When it comes to parenting, you can only follow your own compass and figure out what works for you as a parent and for your own child. And this happens to work in our family dynamic.

Parents may worry that their child will repeat something offensive they saw on TV. But honestly, the worst things to have ever come out of my son’s mouth are things he’s heard from me. And you know what? It doesn't bother me that much. For me, it's more important to focus on things like helping my son prepare for kindergarten and making sure that he knows what it means to accept all kinds of people in his life. So allowing him to watch some grown-up shows with me is really the least of my concerns.

Of course it is also acceptable for parents to subscribe to the opposite idea. I don't allow my son to curse to his heart’s content, but other parents might have a zero tolerance policy for it that I do not. And while I have no problem allowing him to stay in the living room when one of "my" shows comes on the TV, other parents might prefer to shield their small children from anything not geared for kids. Again, it's not about trying to change anyone’s mind or say that one method is better than he other, but for us, this has worked. And so far, my son hasn't made any ill-timed "that’s what she said" jokes. Though if he did, I might feel a little proud as well as embarrassed.

That said, I don't let my son watch absolutely everything on TV. It's not like we watch Game of Thrones and I ask my son for his best theories on Cleganebowl. And furthermore, discussing violence on TV can make a big difference if the concern is the potential negative ramifications of the content.

According to Dr. Amy Nathanson on Psychology Today, while some research has shown that for some children, viewing violence on TV leads to violent behavior, "restricting or discussing violent TV programs is associated with many positive outcomes for children, such as lower levels of aggression." Basically, if your child does watch something less than ideal with you, it's important to engage with them about it. The grown-up shows I watch with my son aren't overtly violent or suggestive, and I make sure to answer any and all questions he has about them.

I believe that the most important thing you can do as a parent is instill the right kinds of values in your child. And while I do seriously love all of my shows, going above and beyond to shield my child from them is not my primary focus as a mom. I want my son to know right from wrong and that how to love and accept people. And if he also looks up from his Legos from time to time when things get especially tense during Parks & Rec, then that’s fine with me.