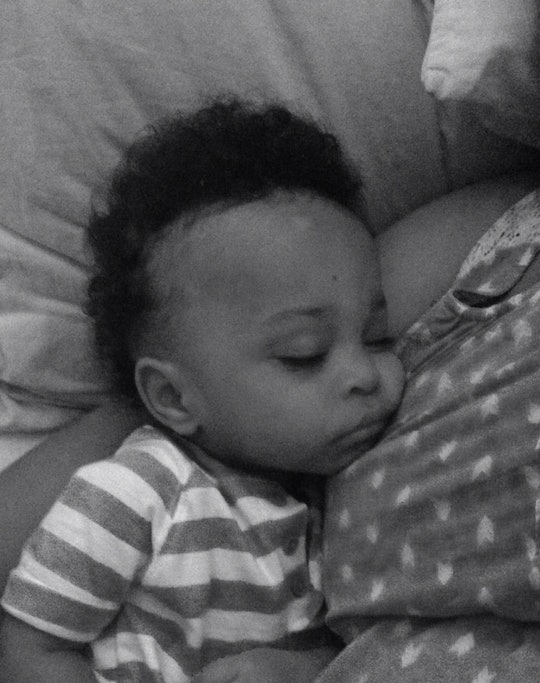 I Let My Kids Cry It Out, & They Turned Out Fine

Very early on in my pregnancy, at about 12 weeks, my husband and I had friends over. They had twins who were maybe 2 or 3 at the time. I watched from the kitchen as their boys wrought havoc in the living room. Our friends were pros: they were wiping snot, wiping butts, and stopping little throwing arms mid-air before they broke anything of value.

Because we were expecting twins as well, I begged them for their twin parenting wisdom. "What do we need to know?," I asked.

Without hesitation, she said, "The most important thing is getting them on the same sleep schedule. Don't be afraid to let them cry it out."

Despite the controversy surrounding the cry it out technique (CIO), the sleep-training method that entails letting children cry themselves to sleep to self-soothe, and the myriad studies that say letting babies cry it out is harmful to their development, we listened to this advice. It wasn't easy, for a number of reasons, but we used the CIO method on our twin boys. It was one of the best parenting decisions we made, and our boys turned out fine.

The cry it out method is basically exactly what it sounds like: a sleep-training method designed to teach infants to go to sleep on their own and self-soothe, by encouraging parents to ignore their babies' cries. There's tremendous controversy surrounding CIO, in part due to parenting experts like attachment parenting guru Dr. William Sears suggesting that CIO is not only cruel, it's dangerous. In fact, Darcia Nabarez, Ph.D., a professor of psychology at Notre Dame, suggests that letting infants cry it out can lead to "long-term effects on intelligence, social capacities, and health."

That's not to say that this research is definitive: it's not. In fact, in 2016, an Australian study found that the CIO method is not only effective at getting babies to go to sleep on their own, but it also doesn't appear to lead to long-term stress or emotional problems. Nonetheless, CIO still has a reputation as an inhumane and possibly detrimental method of sleep training.

No matter how accustomed you are to hearing your children cry, listening to them scream your name for an extended period of time is brutal.

Approximately 13 weeks after I was told by my friends to try CIO, I went into labor. Our boys were born at 25 weeks. For the first three and a half months, they lived in the NICU. When we finally bought them home, they slept in their Rock'N'Plays, which we kept in our bedroom because they were hooked to heart rate and oxygen saturation monitors and oxygen tanks. We lugged around those cradling devices because they allowed our boys to sit up and sleep. We transitioned into a routine where we were able to get the boys to nap at the same time each day.

Having multiples teaches you one important thing: letting a baby cry is not harmful to the child. I quickly learned that, at some point, one of my boys was going to cry, and there was very little I could do about it, especially if I was busy with the other one. I learned that soothing one baby meant that the other one may have to cry, and that hearing them cry was not the end of the world. Babies are not as fragile as they appear.

Eventually, when our boys stopped using the monitors and oxygen, we moved them into their own room and their cribs. They were used to sleeping in their own beds in their own room. For a long time, my husband and I thought we were lucky. We had accomplished the main goal our friend told us was so important: getting them to sleep. But we had been duped. After they turned 1, after they stopped needing feedings during the night, the honeymoon was over.

We tried everything else first: rocking them to sleep, staying in their room until they fell asleep, even letting them fall asleep in our bed and then putting them back in their own after they were knocked out. There was no problem getting them to fall asleep, but they never stayed that way, often waking in the middle of night and leaving us tired and irritable in the mornings.

On online message boards, other mothers talked about how they carried around their babies constantly to soothe them, that if they put their bundle down, he or she would cry and they were worn out from having a baby always attached to them. I respected their choice to mother the way they felt was right, but carrying around two infants all day was impossible for me, and, frankly, I didn't want to do it. I was uninterested in attachment parenting. I also didn't want to allow my babies to sleep in the bed with us at night. I'm a selfish and active sleeper who needs space. I love my children, but they needed to sleep in their own beds.

So we finally decided that enough was enough.

One night, we gave them a bath, put on their PJs, said our good-nights, and then we shut the door.

This felt like torture for everyone involved. It felt as if I were deliberately ignoring the needs of my children.

No matter how accustomed you are to hearing your children cry, listening to them scream your name for an extended period of time is brutal. Immediately, the guilt set in. I remembered the feeling of helplessness I felt watching them inside their incubators in the NICU, seeing them pinched and pricked with needles, fed through a tube, their faces covered by a breathing machine. After all the pain of their first months on this earth, how could I let my children suffer this way?

Letting your child cry in front of you feels different than letting him cry behind a closed door in the middle of the night. You can see that he is OK and everything is fine when they are in front of you. But this felt like torture for everyone involved. It felt as if I were deliberately ignoring the needs of my children. And after the guilt of their being born prematurely, dealing with postpartum depression, and the pain of not being able to breast feed, letting them cry it out felt like too much.

We had to try the method several times in order for me to buy into it because each time I gave in, "rescuing" them only after a few seconds of crying. But my husband and I were exhausted, and the lack of sleep made us turn on one another. Eventually, after nothing else seemed to work, we both decided that we needed to give it a good solid effort. It wasn't just about us anymore, our boys needed a good night's rest too. The night we finally stuck to our decision to let them cry, I timed how long they actually cried for. It was no more than three minutes.

The pain and trauma I thought they felt was my own insecurities and emotions taking hold. I forgot how resilient my children were. I forgot that they had showed me how strong they were the moment they were born at 25 weeks, how they'd made it through open heart surgery and eye surgery, how they'd stopped needing oxygen only a few weeks after coming home. Letting them cry it out so they could learn how to self-soothe would not break my children, despite how it felt as though it were breaking me.

Family members are often amazed at how well our boys sleep. My godmother came to visit and our sleep routine blew her mind. "I've never seen children go to bed that easily," she said. I tell her that it was a struggle, but that I am glad we did it in the long run.