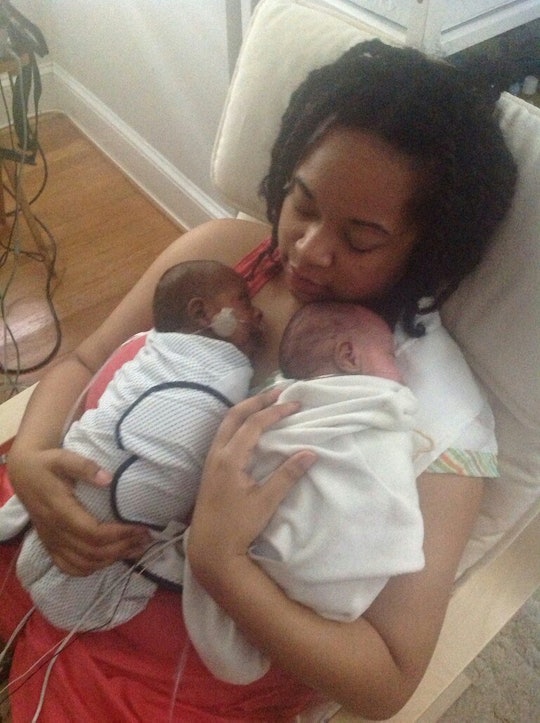 The pumping room in my office building is actually pretty nice. There are two partitioned-off desks like the ones in libraries, equipped with reading material, a refrigerator, cabinets, and a bulletin board. On the boards are pictures of babies tacked on by others who use the room. With nothing else to look at, I stared at those photos while I pumped. Chubby, bright-faced infants smiled and gurgled back at me while a machine sucked out what other parents like to call “liquid gold.” The refrigerated bottles belonging to those pumping for the smiling, gurgling babies were full. Clearly, they were doing something right. But I was struggling to breastfeed.

So, I tacked pictures of my boys on the wall. My tiny premature twins born at 25 weeks were lying inside their open air cribs in those photos, feeding tube through the nose. I stared at their pictures while I pumped, willing my breasts to produce more than the mere one or two ounces they leaked out every few hours. I also stared at them while pumping in the NICU. Behind a curtain, I'd pump while looking into their isolettes, thinking that maybe seeing them, although I couldn’t hold them, would help. I ate oatmeal, drank dark beer, tried fenugreek, other supplements, pumped every 30 minutes. Then read that pumping too much could cause a decrease in supply, so then I pumped every four hours. Then I read that leaving too much time between pumps would reduce supply so I pumped and pumped with no real direction or understanding. I just knew I had to pump. I just knew I needed to feed my babies.

Hours after their birth, not long after seeing them for the first time inside those tiny plastic boxes big enough to fit each one of them 20 times over, the nurse rolled an industrial strength hospital-grade breast pump into my room and showed me how to collect vials of colostrum. They explained that they rubbed the yellowish liquid over the infants’ lips because it helps to heal them, boost their immune systems, and gets them interested in taste. For babies born so early, these benefits mean everything. I clung to the belief that breast milk could save my children. I read that instances of necrotizing enterocolitis (NEC), one of the leading causes of death for premature infants, are lower when the baby is receiving breast milk. Report after report told me that breast milk would save my kids’ lives; that it was all up to me to keep them alive. Or, at least, that's what it felt like to me. Yet I couldn’t actually hold them to my chest. I couldn’t physically breastfeed them.

I had failed at pregnancy, failed to carry them to term, and now I was failing at the one thing I could do for them as a mother while they were hospitalized: feed them.

After the first couple of weeks, breast milk was hard for me to produce. It wasn’t just my children’s bodies who were adjusting and healing from the trauma of premature birth. My body was attempting to feed children it wasn’t prepared to nourish. I desperately tried to squeak out enough to cover their feedings. But breastfeeding isn’t all about the mechanics. It's emotional and physical, and stress may reduce your supply. Physical contact, a baby’s suckling, produces certain hormones that help to create more milk. I wasn’t able to control any of these factors, and yet, as they continued to grow and strive, the more milk they needed from me. And the less I was able to make.

I knew switching to formula was the best thing I could've done for me, my family, and most importantly, for my boys.

The pressure to breastfeed is everywhere. My husband, the amazing man he is, knew the benefits of breast milk and pushed me to keep trying. Our hospital had a lactation nurse whose main responsibility was to train new mothers on how to breastfeed. When the boys were big enough, she tried to teach me how to get them to latch, but it's hard for preemies to adjust to a breast. They start off receiving nourishment through a tube either inserted through the nose or mouth, and that leads directly down to the stomach. When they are big enough and can demonstrate that they can suck, swallow, and breathe at the same time, they're offered bottles. A bottle’s nipple is vastly different than a real one, and my babies were having none of mine. It marked yet another of my failures. I had failed at pregnancy, failed to carry them to term, and now I was failing at the one thing I could do for them as a mother while they were hospitalized: feed them.

She wondered how much milk I had, and when I told her how much, she said she would have to supplement it anyway, that the amount of milk they now consumed was more than what I could give.

The postpartum depression I refused to admit I even had was fueled by the failure and the guilt I felt over their early births. But it was also powered by my lack of sleep, the stress over their health, my time away from them, work, family, life, compounded by the constant interruption of pumping. Trying to keep up with it all while maintaining an outward appearance of control was breaking my already weak spirit.

Then one day I received the call I knew was coming: the NICU nurse explaining that they’d run out of milk, and their next feeding was in mere minutes. She wanted to know if formula was alright. I was at work. I had just pumped. I asked her whether she could wait until I got there. She wondered how much milk I had, and when I told her how much, she said she would have to supplement it anyway, that the amount of milk they now consumed was more than what I could give.

I panicked. Despite all my trying, despite the reports and research, my son still caught NEC. I knew that then, more than ever, my son needed the miraculous healing properties of my breast milk. I said this to the nurse who, to her credit, did not laugh at me. Instead she suggested I continue to pump if it would make me feel better, but that in order to give them enough food so that they could grow, she would have to supplement my milk with formula. And then she said:

But you don't have to pump if you don't want to. You can give them formula. There is nothing wrong with formula.

And there it was. Someone had finally given me permission to stop. I came in after our talk anyway, my minuscule drippings contained in a baggie. When she mixed my breast milk with the formula, the amount of formula was almost three times more than the breast milk.

The NICU taught me and my husband how to mix their formula for extra caloric intake, and we both participated in the act of feeding our children. It wasn't all just on me anymore. The pressure no longer weighed me down.

Shortly after, when my son healed from NEC while being fed formula, I decided I needed to let go of something. I packed my breast pump up and shipped it off to a friend who was pregnant. My boss gave me several very nice hand-me-down glass bottles, and I went shopping for more. The NICU taught me and my husband how to mix their formula for extra caloric intake, and we both participated in the act of feeding our children. It wasn't all just on me anymore. The pressure no longer weighed me down.

A nurse from the NICU visited us the week after the boys were discharged home. She weighed them and was surprised to see that they had gained more than two pounds in the very short amount of time since their release. Having two premature babies was hard, and I still struggled with postpartum depression even after they were out of the hospital. But they were thriving, and they continued to thrive. The guilt lingered, but slowly faded away as I saw them grow. I compared them to breastfed babies and saw no difference that wasn't a possible result of their prematurity. I watched the struggles of other breastfeeding moms, who loved nourishing their children, but spoke candidly to me about the strain it caused mentally and physically, and I knew switching to formula was the best thing I could've done for me, my family, and most importantly, for my boys. Formula feeding gave me the freedom to focus on healing, while making sure they stayed well-fed. There was no denying that, although I felt I had failed at pregnancy, I succeeded in this aspect of motherhood.