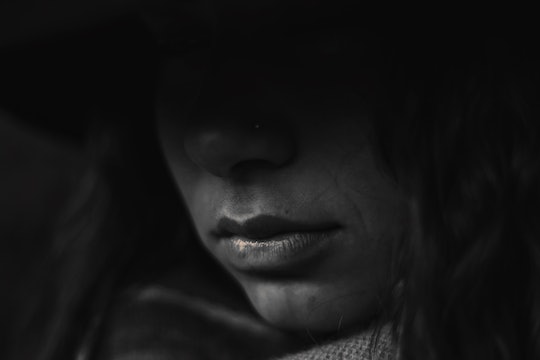 The Devastating Reason Why I Kept My Postpartum Depression A Secret

I knew I was struggling with postpartum depression when my daughter was just six weeks old. I was cried every day, and tossed and turned every night. I was nervous and anxious. Suicidal. But instead of talking to my husband or reaching out for help, I suffered in silence. I slapped on a smile and pretended everything was OK. I lied even though I knew I should have been open and honest about my struggles. I knew I should've told someone — anyone —how miserable I was. How unhappy I was. That I wanted to die. But the truth was I couldn’t tell anyone about my postpartum depression (PPD) because I was scared. Scared others would see me as flawed and unstable; worried people would see me as an unfit parent. I couldn’t tell anyone about my PPD because I was terrified that if people saw who I'd become, they'd take my daughter away from me.

It all started with the crying. A few tears here. A heaving, uncontrollable sob over there. I would cry if I spilled a glass of water or if my coffee got cold. I would cry because my husband was going to work; because I was tired; because I was hungry; because the house was a mess. When the baby would cry, I would sob beside her even louder and for longer. Everything triggered a sobbing response from me, and no matter what I did, I couldn't stop crying. I'd soothe the baby, and the tears would begin again anew. Nothing helped, and everything else only seemed to make it worse.

Before long, the tears came without rhyme or reason, and soon, they streamed down my face unnoticed. I could comfortably carry on a conversation while crying. Then, however, the sadness shifted. I became angry and anxious. I'd tense up the moment I heard my daughter's cries. I'd stiffen at the thought of touching or even holding her. I became bitter and resentful, and the rage I felt consuming me was absolutely blinding. When I found myself recoiling from my daughter, I knew something was wrong. When I told myself that I hated my daughter, I knew things needed to change. When I wanted to leave and abandon her, I knew I was sick.

I had a healthy, beautiful baby girl and I should have been grateful. I was supposed to be happy. But I was dying inside.

In that moment, even though a proper diagnosis was still months away, I knew I was suffering from postpartum depression. I'd read about it, and I'd even asked my own doctor if I was at a heightened risk because of my history of depression — I was. Knowing that it was a possibility didn't make it any easier to admit, though. I couldn’t talk to my husband because I was afraid. I couldn’t talk to my mother or in-laws because I was ashamed. I couldn’t talk to my friends. I couldn't even bring myself to broach the topic with my doctor. I had a healthy, beautiful baby girl and I should have been grateful. I was supposed to be happy. But I was dying inside.

Postpartum depression is a specific type of depression that affects women during pregnancy and/or after childbirth. According to Postpartum Progress, one in seven women will experience postpartum depression or some other perinatal mood disorder. Symptoms of postpartum depression, according to the Mayo Clinic, include sadness, fatigue, restlessness, insomnia, changed eating habits, a reduced sex drive, crying, anger, anxiety, and irritability. Despite the fact that some of these symptoms seemed par for the parenting course — like a low sex drive and sleeplessness — others, like feeling worthless, feeling hopeless, and wanting to die, were absolutely terrifying.

I didn't want to face my fears, because doing so meant that I'd have to admit to them: I hadn't yet bonded with my daughter the way a mother is expected to; there were days and nights when I resented having her; there were moments when I wanted nothing more than to walk out. Admitting these things meant admitting that motherhood wasn't something that came naturally to me. And that truth, that truth was devastating.

What's more, postpartum depression lies. It warps your perception of reality and makes you think absurd things, all-or-nothing type things. I snapped at my daughter one day when she refused to eat. And my postpartum depression convinced me I was a bad, unloving mom. I often felt like I was the worst mom. There were days when I felt unworthy of my daughter, and there were moments when I was convinced I was crazy — so crazy that, if people found out, they'd take my daughter away from me. If my partner, our friends, and our families knew that I was sick and suffering and suicidal, they'd take my baby girl from me.

Yet even though I knew the symptoms and what I was up against, I still struggled to ask for help. I worried too much about how I'd look if someone found out the truth about me. What would the moms in my play group think? What would my friends and family say? Would my husband leave me? I didn't want to face my fears, because doing so meant that I'd have to admit to them: I hadn't yet bonded with my daughter the way a mother is expected to; there were days and nights when I resented having her; there were moments when I wanted nothing more than to walk out. Admitting these things meant admitting that motherhood wasn't something that came naturally to me. And that truth, that truth was devastating.

But then, one cold November day, I couldn't keep it together any longer. I couldn't hide it any longer. I couldn't keep it a secret. My daughter was having a fitful afternoon, and she was teething, screaming, crying, and refusing sleep. I did everything I could, but I felt my will collapsing. Then I had a vision; a disturbing, terrifying vision. I saw myself I holding my daughter, feeding her, rocking her, and coddling her, and then the next, I was squeezing her. Hard. The way a mother should not hold her child.

When I came to, everything had changed. That vision, though it wasn't real, was horrifying. It marked the one moment when I realized I needed help. Not only did I need help, but my baby's life depended on me getting help. I called my doctor and made an appointment. I called my husband and told him everything. Well, I told him about everything except that vision and the suicidal thoughts. Fear of what he might think of me held me back. But I took that first step. I made the leap and admitted something was wrong.

That first step saved my life.

Make no mistake, help wasn’t immediate. Sure, my OB-GYN fit me in that evening and I left with a prescription as well as his personal phone number, but it took months to get the tools I needed to help me recover. Months of medication, meditation, and therapy. And one day, things just clicked. It felt like sky cleared and I could take air in. I could feel warmth on my skin. I could feel everything.

Therapy gave me a lot. It gave me a safe, judgment-free space to talk, vent, and share. It gave me perspective. It gave me stability. A place where I could admit the fears that roamed around in my head. With therapy, I realized that I wouldn't be so damn concerned that I was "screwing up my daughter" if I didn't love her more than life itself. I wouldn't be worried I was hurting her or harming her if I didn't care. I found tangible, helpful, resourceful ways to get the help I needed. And though opening up my heart and mind to feel everything at once sucked, everything I went through to get back to my daughter was worth it. Asking for help gave me a second chance. I'm not sure what I would've done without it.

More Like This
How Hot Is Too Hot For Babies? Experts Weigh In
Gathre’s Winnie The Pooh Collection Is Finally Here
23 Sweet Quotes To Dedicate To Your Rainbow Baby
"Crybaby Ambulance" In Europe Will Help Exhausted Parents