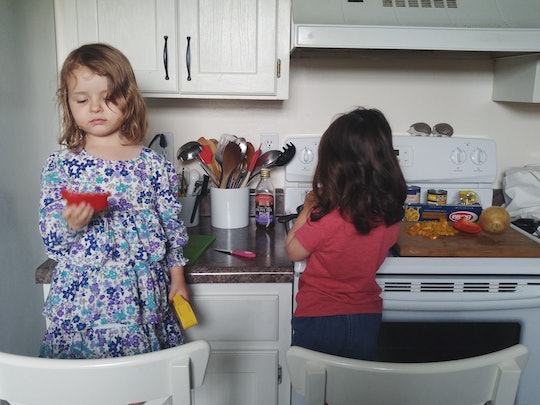 In our home, we take a laissez faire approach to food and how our children eat. Even though I try to present my children with plenty of variety and healthy foods, I prefer not to get caught up in how much they eat or whether or not they eat everything I put in front of them. So far, this approach has worked well enough. I wouldn't label either of my kids picky, not only because I don't think that label is accurate, but I also don't think it's healthy to use. I strongly feel that my children are entitled to their own tastes, and I prefer not to shame them for exploring their preferences or listening to what their bodies have to say about the food they eat.

Still, I've started to noticed we're falling into a pattern of eating the same-old-thing week after week. If I know my kids will always eat broccoli, pasta, or baked chicken, it is easy for me to default to a variation of that menu to avoid hungry kids or my own frustration. Recently, I wondered what would happen if I let my preschooler cook dinner for a week. I wondered if I could start to influence their taste buds so that we could add more variety to our weekly menu.

Experts suggest involving your kids in meal time as one of the essential practices of raising healthy eaters, and kids in the kitchen has been a foundational part of both Montessori and Waldorf educations from the start. Still, juggling two young kids, hot pots, and knives has always kept me from involving my kids in anything more than the occasional batch of cookies or banana bread.

I decided to give involving my kids in dinner prep a try for a week. My hope for this experiment was to get my kids to try some new foods without starting a meal time battle or creating tension over what they do and don't eat.

From the start, I knew I needed to keep my expectations realistic. Instead of expecting my newly-turned 2 year old to be involved every night, I'd focus on allowing my preschooler to cook while my toddler emptied the tupperware cabinet or hit pots and pans with wooden spoons. I knew that in a typical week, we only cook five or six times, eating leftovers or grabbing takeout the other nights of the week, so I planned five dinners that were outside of our normal routine but still realistic for our lifestyle and toddler palates.

Day 1: A Trip to the Library And One-Pot Pasta

For day one, I started the day with a trip to the library to pick up a few cookbooks to help us plan out our menu. My preschooler was anxious to help pick out a few different meals, and my toddler loved a cookbook that was focused on kid-friendly cooking and littered with pictures of kids her age.

Running short on time, we opted to wait to grocery shop and picked a meal we could cook with food we already had on hand. I started with something simple, a one-pot meal that had cheese and pasta (their favorites) but also had red peppers, onions, and other vegetables they are still pretty hesitant to try.

I'm not going to lie, cooking with two kids underfoot was hard. I felt really uptight about safety in my small kitchen. The limited counter space made it difficult to keep them away from the hot stove while still allowing them to be fully involved in the process. When dinner time rolled around, my kitchen was trashed and I was feeling a little strung out, but we still managed to sit down as a family to try what we had cooked. My younger daughter devoured the dish. My older daughter, however, was excited to try a few bites, but she decided it was too spicy. I didn't push the issue and let her eat a peanut butter sandwich instead.

Day 2: Grocery Shopping And A Box Of Cheerios

With our meal plan complete, we started day two with a trip to the grocery store. My toddler started the trip really interested in helping me drop fruits and vegetables into produce bags, but ultimately was more into riding in the race car shopping cart than she was into shopping. Still, I tried to talk her through what we were buying so she could see some of the steps that are involved in getting food on our table each night.

I found myself really frustrated that my kids were in the way when all I wanted to do was throw something easy together so I could lay down on the couch.

That night, we tried a hot weather friendly recipe: chicken avocado wraps. My kids loved just about everything in this recipe, so I thought it would be an easy to try these foods in a new format. I set my preschooler up with a butter knife and let her help me chop avocados and build the wraps. At dinner time, she was really into the wrap, but my younger daughter wound up eating a bowl of cereal for dinner. It was a little frustrating knowing she liked all of the things in the wrap, but was turned off by the way it was presented.

Day three of our experiment was a really busy one. I was trying to get caught up on work and my husband and I were both fighting off developing colds. By the time dinner approached, I was already feeling really stressed out, so I was glad when I remembered I had something on the menu I'd already cooked before.

One of our favorite meals is burrito bowls. It is easy enough for me to cook and my kids can eat it deconstructed, which seems to go over much better than presenting them with the entire bowl of ingredients combined. I let me daughter take charge of chopping red peppers with her butter knife while I prepared sweet potatoes, rice, and beans. My preschooler seemed way more interested in eating the peppers than prepping them, which was actually totally OK with me since this is not something she has been interested in eating before.

As I expected, my kids ate well. They both love roasted sweet potatoes and avocados and were willing to try the rice as long as it was sprinkled with shredded cheese. Even though the day started off rough, I was happy to feel like I had a "dinner win."

Day 4: Stepping Outside of the Box

After a few days of exploring just a few new foods, I decided day four was the day to step outside of the box and try something I knew my kids had never been into before. I made a stir fry of cabbage, broccoli, and chicken, and used teriyaki sauce for seasoning. So far, I've had zero luck getting my kids to eat stir fry, and I really hoped that involving them in the prep would open their minds to trying new things.

In the end, dinner prep was stressful. I was fully consumed by that cold I'd been trying to fight off the day before and my patience was limited. I found myself really frustrated that my kids were in the way when all I wanted to do was throw something easy together so I could lay down on the couch. Without this experiment, I must confess, I would have opted for peanut butter sandwiches since I was feeling so rough.

As I suspected, my kids picked around the veggies and ate only the chicken out of the stir fry. By the end of the day, I was feeling burnt out on all things dinner prep and knew the next day was the perfect day to eat leftovers instead of cooking.

Day 5: Knocking It Out Of The Park

After taking a day off from cooking, I was way more willing to get back in the kitchen with my preschooler for the last day of my experiment. I was also excited to see we had planned something resembling comfort food, since my husband and I were still sick and my kids were starting to show signs of a cold as well.

My daughter, however, was less excited to cook. She hung around in the kitchen for a few minutes and then ran off to play with her sister. I tried to ask her for help a few times, but she was more interested in chasing the dog around than house than cooking. She did stop by the kitchen a few times with instructions. She wanted me to "leave her corn big" instead of cutting it off of the cob and wanted to be sure I didn't make her pork chop too spicy.

Knowing my kids were sick, I didn't expect too much of them at dinner time, but I was thrilled when they each ate all of their meat and corn and had a few bites of potatoes. This day felt like a really strong note to end my experiment on, even though my daughter wasn't physically involved in dinner prep, she was starting to understand some of the work that goes into cooking and I could see she was more willing to try new things.

Looking back at this last week, I feel like my experiment yielded mixed results. I would've loved to end the week knowing my kids had really grown and branched out to try news things, but that wasn't the case. Each of my girls tried a few new foods, decided they didn't like some, and that they liked others. I think it's important as a mom to keep my expectations realistic. Experts have found that the best way to open kids up to new tastes is to introduce it over and over again, and knowing this, I wasn't really expecting to change my kids in a week. I see now that it will take a long term approach and a lot of patience if I really want to introduce new foods into our meals.

I'm not going to lie, cooking with my kids was hard. Every night my kitchen was trashed and dinner was later than I would've like. Moving forward, I have to weigh how realistic it is to involve my kids while still maintaining my own sanity. So, while my kids will probably be cooking with me more often, I really don't anticipate asking for their help more than once or twice a week.

I feel OK with the small changes we have made. Moving forward, I'm making decisions about meal time on a day-to-day basis, weighing how I am feeling and what kind of mood my kids are in before inviting them into the kitchen to help and giving myself the freedom to choose a PB&J if we're having a rough day. I'll be ignoring any pressure to raise perfect eaters or put "Pinterest perfect" meals on the table every night. Instead, I'll rest in knowing I am doing what works for my family at this moment in our life.