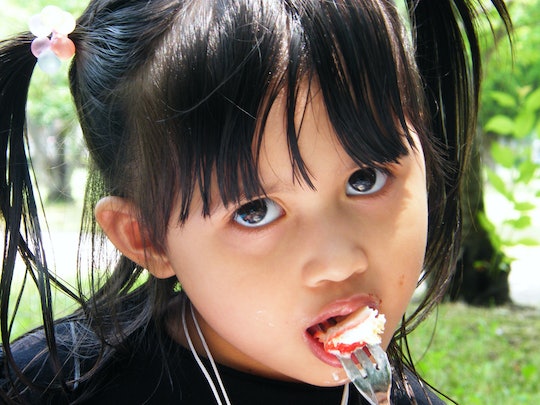 I have been that mom. It's embarrassing to admit it now, but I have been the mom who is silently judging the parents of the kid eating a french fry, wondering what the hell they were thinking. Don't they know that those foods are basically devoid of nutritional value, and that they're failing to give their kids what they need to thrive, and that beyond all of that, by allowing them to indulge in junky food that they're essentially setting their kids up for a lifetime of unhealthy habits? Don't they know? Don't they care?!

Yeah. I've been that mom. And I've felt guilty for it.

And the thing is, I think most of us — even though we know we shouldn't — have moments where we find ourselves having a negative knee-jerk reaction to something we see another parent doing or not doing. But the one thing you need to know — that we need to know — is that judging how other moms feed their kids is a waste of time and completely unfair because we will never know that mom's full story. We will never know what led her to feed her kid something that you don't agree with. And we never know how we might react in that exact scenario, with our own children.

This is exactly what happened with me. When it came to food, I had it all figured out in the beginning: I was the mom who was going to raise her children with no sugar, eating all organic and zero processed foods. I had my food processor ready, and had already started to gather a Pinterest board full of all-natural recipes that would replace packaged granola bars, muffin mixes, and boxes of cookies. I was going to do things right. And if I had the time to do it, who the hell did these other moms think they were, copping out like I kept seeing them do? Clearly, they just weren't trying hard enough. Because if they did, they would be feeding their kids the "right" way, aka, the way I — in all my glorious self-righteousness — did.

Or at least...the way my gloriously self-righteous self planned to feed my kids. I wasn't in the parenting game long before my judgmental ass got handed to me.

I'm not exactly sure when it started, my downfall from nutritional perfection with my kids. Was it when my daughter adamantly refused to eat all of the different blends of homemade baby food I'd made for her? Or was it a year later, when she tried my fifth attempt at a healthy muffin (all attempts were delicious, according to anyone else who tried them, for the record) and gagged, spitting it out? It's most probable that the real moment when I started to abandon my rigid standards for what I would feed my kids came when we got the news from our doctor that my daughter was continuing to slide off the weight percentile curve, despite us trying desperately to fill her with healthy foods. She was already registering in the 0-5 percentile range, and still wearing clothes for 1-year-olds when she was closing in on age 3.

Judging how other moms feed their kids is a waste of time and completely unfair — because you will never know that mom's full story.

And it kept piling on: Right around then, a pregnancy was pushing me into belly-first into depression and anxiety. Suddenly, I was a woman who was more than happy to take the easy way out and feed her kid a few french fries if it meant that she would actually eat and that she wouldn't have a meltdown in public again. Because the truth is, there was nothing "easy" about being at that point. It was the product of endless attempts to be flawless in what I fed my kid; it was the culmination of mounting concern over her disinterest in eating anything; it was understanding that, at this point, the best thing for her was to eat pretty much whatever we could get her to eat; it was crucial to my ability to parent — amid the pregnancy and depression — to pick my battles, and I was smart to enough to save my fight for the moments when it might actually result in a win.

The point is, in a moment when an outsider who didn't know anything about me might look at me and my french fry-eating child, and immediately judged me as someone who didn't care about my kid's health as much as my own convenience, I was being — in that moment — the best mom I could be. I was, in fact, doing the healthiest thing for both of us. But you never would've know that from looking at what was happening on the surface: just a mom letting her young daughter chow down on fries.

In a moment when an outsider who didn't know anything about me might look at me and my french fry-eating child, and immediately judged me as someone who didn't care about my kid's health as much as my own convenience, I was being — in that moment — the best mom I could be.

And in those moments during the first trimester, when looking at food made me want to throw up? Bring on the mac & cheese, Goldfish crackers and other debatable foods! And while I wish I could make more things from scratch (I still have recipes for homemade crackers pinned on one of my Pinterest boards), I have stopped being so hard on myself for not doing so. And guess what? Everybody is doing just fine eating the things I swore they would never eat.

And here's the thing: You will, at least once and probably more than once, end up feeding your kid something that you would judge someone else for feeding their kid. It'll happen. The circumstances will make sense to you at the time, so remember that maybe what you're seeing are that mom's "totally understandable circumstances."

Save yourself the energy it takes to feel judgmental of others and guilty about eventually doing it yourself. Parenting isn't an exact science, and the more forgiving you are of those moments when someone else doesn't measure up to your standards of the ideal parent, the more forgiving you'll be of yourself when the same thing happens happens to you.

More Like This
Abbot's Formula-Producing Plant Can Reopen In As Early As 2 Weeks — Now What?
Kelly Ripa Loves A Sunday Dinner Date With Her Grown-Up Kids
Ashley Graham On The “Fun, Organized Chaos” Of Raising Twins
These Stepmother's Day Instagram Captions Are Straight From The Heart